(November 10, 2019 – Plano, TX) It was exactly what you’d expect between a Knights and Spirits game. Another close one, another pitcher’s duel and two solid-hitting teams trying to figure out top-notch pitching.

For the Knights, it was their ace, Keaton Hougen and for the Spirits, they relied on former MLB pitcher, DJ Carrasco. With both Craig Molldrem and Jason Bottenfield unavailable to pitch, the Spirits had planned on throwing everyone, less the kitchen sink to do what it would take to shut down a great hitting Knights squad. In a battle that would feature 20 hitters going down via strikeout, it was the Spirits who found the upper-hand behind clutch-hitting, Kirk Sipila that led to a 3 to 0 victory and the NTABL Fall Championship for the Brazos Division for the ghosts. 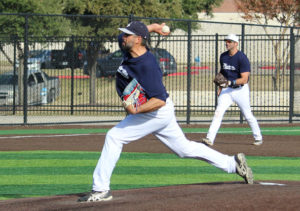 DJ Carrasco fires toward one of his 14 strikeouts

Carrasco was just flat out nasty. Having not pitched for a bit and after missing a previous start with the Spirits earlier in the season that was scheduled against the Knights, Carrasco dusted off the arm and planned on going two innings. The plan was to see how it went and the Spirits would then turn to additional arms that included Duane Aponte, Brant Finchum and Sipila. This however would turn out to be one of those outings where you plan for a little, but then see those plans get both met and exceeded…big time!

Carrasco not only pitched the two innings planned, but ended up going the distance finishing with a complete-game shut-out win, allowing no runs and just a pair of hits while walking two and striking out 14. On a day that ended up being perfect for baseball in mid November with sunshine and 70-plus degrees, nearly the direct opposite from just a year ago that featured 20-degree weather and a Knights championship, this day turned out perfect for the Spirits.

The game started out in exactly what you’d expect from a pitcher’s duel, with the Knights getting a base runner in the top half of the first after Chris Clark flew out and Rodger Battani went down on swings. Haley Hougen rallied for a single to right-center, but Michael Kubick grounded out to end the inning. The Spirits watched Keaton Hougen retire Cliff Brade on a ground out and Eric Goetz on swings, but Sipila doubled to show life for the Spirits, but was left stranded when Travis Hitzeman flew out to left.

Carrasco struck out the Knights side in the second inning and Hougen returned the favor to record another strikeout after setting down Shawn Lee on on a called third strike before Patrick Bilgere reached on an error. Hougen was then able to retire Carrasco with a ground out and David Tipton via a fly ball.

The strike zone appeared to momentarily grow smaller in the third after Nick Smith drew a walk. Carrasco then struck out both Stacy Scott and Scott Wulzer, but then walked Keaton Hougen before striking out Chris Clark. The pair of walks drew some barking from the Spirits defense including a couple of strange looks from Carrasco, who had a brief meeting with the home plate umpire along with Bilgere, who was catching. After several minutes of discussing where the ball was being caught versus where the ball was crossing the plate, it appeared cooler heads prevailed and the game continued without incident. 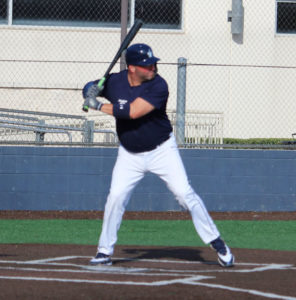 Kirk Sipila dialing in before a 2 RBI single

Hougen then made quick work of the Spirits after he struck out both Finchum and Aponte before retiring John Hefner on a ground out. The Knights then went in order in the fourth and the game was beginning to become as boring as this game story before the Spirits found some offensive life in the bottom half of the inning.

Grant Martin went down on strikes to lead off the inning and Brade came through with the Spirits second hit. The speedy Brade then took off for and swiped second base before Goetz patiently battled and drew a base-on-balls. Brade then stole third and on the next pitch, Goetz took off for second and the Spirits had two runners in scoring position for their clutch hitter, Sipila who was already patiently working the count himself. After Goetz filled in the scoring spot at second, Sipila took the next pitch up the middle to score both runners and the Spirits had a 2 to 0 lead.

Hitzeman then drew a walk and Lee followed with a single off of Hougen that was returned equally, if not faster than the fastball that was delivered to him. The line shot took off straight for Hougen’s head, but he was fortunate enough to get his glove in front of his face before falling backwards as the ball dropped safely in for a single. Hougen dusted himself off and was able to draw Bilgere to a 2-2 count before Bilgere was retired on a ground out that allowed Sipila to score, giving the Spirits another insurance run. Carrasco then took a 2-0 pitch to deep left-center field, but the prevailing Northerly winds said, “not today” as the ball was held up long enough for the Knights to snare it at the warning track to end the inning.

DJ went on to hold the Knights scoreless the rest of the way. Nick Smith picked up a hit to lead off the sixth, but went nowhere and despite back-to-back singles by Martin and Brade in the sixth, the Spirits weren’t able to score again as well. Carrasco went on to strike out the side to add the exclamation point in the seventh and the Spirits earned their second Fall championship with the 3 to 0 victory.

“Great day for baseball,” Lee commented jovially after the game. “It’s always fun when you win, but it’s even more fun when it’s a battle. We probably would have liked to put up some more runs, but we knew we’d be facing some solid pitching. Both the Hougen brothers can bring it so we knew we had to take advantage of any opportunities were were given offensively. What can I say about (Kirk) Sipila? The guy is clutch. He won’t toot his own horn, but I’m pretty certain he finished the fall campaign around the .775 mark. It’s ridiculous how patient this guy is. But what’s more important is that he rarely, if ever wastes runners on base. That’s what makes it so fun to watch. And hat’s off to DJ (Carrasco). Man, that guy can play. When we chatted about him working two innings, we were completely satisfied with having him do work before we brought in one of the other guys. He was feeling it today. And the Knights are no joke. That team can hit, so shout out to them as well. They play the game the right way and that’s what makes this fun. Carrasco was lights-out and I know the guys who couldn’t be here will be happy to know he helped carry us. I love these guys, they’re all family and they know that, so it’s extra special to find accomplishments with the people you love surrounding you. I’d rather lose games and play with this group than win with another team. We have it that good here.” 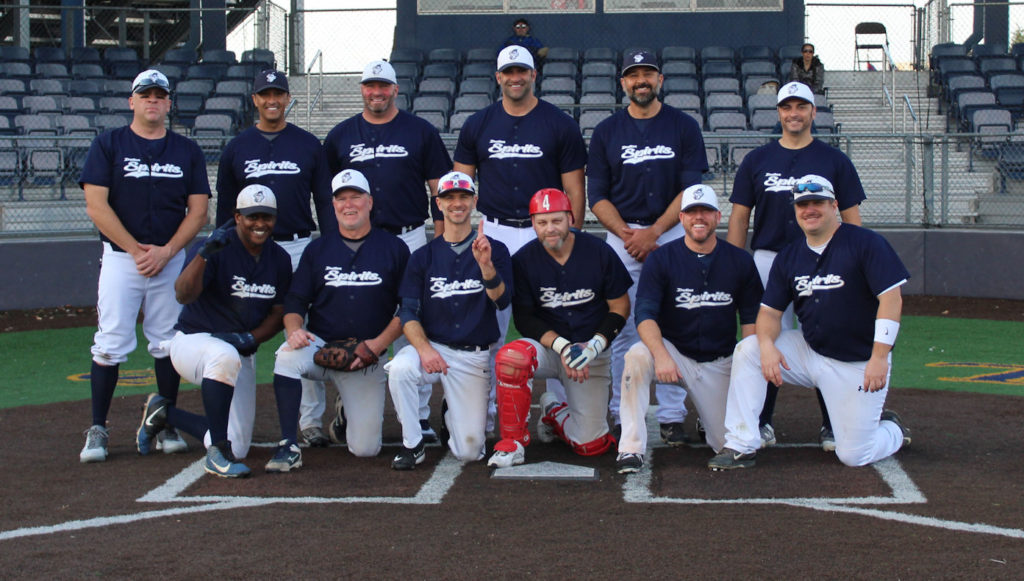 The title is the team’s sixth in its history and the team will look to regroup and start it all over again next March when they head to Las Vegas for the MSBL Kickoff Classic. The team would like to thank all of the Spirits ladies for their hard work and support both at and behind the diamond as well as its group of friends, family and fans who support the team throughout the season. An additional thank you to each of the team sponsors, including Core Physical Medicine – Coppell, Waxahachie Autoplex, DJ Sean Lee, J. Macklin’s Grill, DMIS Managed IT Services, DG Threads and Unlimited Sprinkler Fire Protection, Inc. A special shout out to both Kirk Sipila and Shawn Lee for handling the Xs and Os and all the additional work required to keep the back end of the club going. 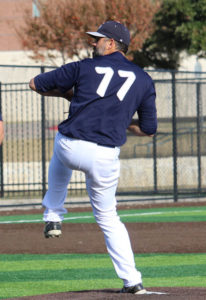