(May 16, 2016 – Carrollton, TX) Despite the 60% chance for thunderstorms, the Dallas Spirits and Cubs showed up to McInnish Park Monday night and actually played baseball. The baseball Gods were in good spirits and the rains held off and the pun carried over to the club as well. Spirits (45+) starting pitcher, John Holmquist’s issues were more of the topographical versus mechanical as he molded his game and delivery as an antagonist to the mound’s condition. Holmquist went 5 innings, holding the Cubs to a single run on 9 base hits.

More importantly, was the support provided to Spirits pitching. “The defense played a solid role in tonight’s victory. We heckled (Eric) McPherson a bit for his bad throw to first (which represented the team’s only error), but otherwise the guys were solid and the effort showed,” noted Spirits (45+) skipper, Kirk Sipila following the contest. The defense was in fact sharp for the club and aided the cause by forcing 12 Cubs runners to be left on base despite the 9 hits used to put those runners in place. 3B Jack Nash played well defensively putting out several runners throughout the game. The defense made a number of solid plays, including an ESPN-like highlight moment to close the game out, as CF Shawn Lee ended the Cubs rally hopes with a diving stab on a line-drive to help seal the victory.

Holmquist gave up just one earned run, striking out 4 and walking 3, while reliever Brant Finchum was happy to see successful fielding behind him. He closed out the game with 2 innings of work, striking out 1 and giving up 1 hit.

The Spirits offense was in full swing, putting up 9 runs on 12 hits. 1B Brian Hackney continued to scorch the ball by adding 3 more hits to his 2016 resume. Hackney was 3 for 3, including a double and 4 RBI. Sipila commented on Hackney’s hitting as of late noting, “I’m not sure what he’s eating, or what he’s doing, but he needs to keep doing it!” CF Shawn Lee doubled to the wall late in the game scoring two runners (2 RBI), and C Patrick Bilgere also added a shot to the gap for a double. SS Eric McPherson also continued his hot hitting with a pair of singles, as did DH Chris Lewis with each hitter contributing an RBI as well.

Sipila and Finchum both added singles and RBIs to the scorecard, and EH Tony Davis also added a single to right field early in the game to round out your Spirits offensive statistics. “It was a great performance by the guys. It’s what you expect this time of year as the season is in full swing, despite the rain outs, but the guys are here and ready to play and they did just that,” mentioned Sipila. The team returns to action next Monday night as they host the Dallas Rangers, who will no doubt be looking to avenge their earlier season loss to the club. First pitch is 6:30PM at Reverchon Park in Uptown, Dallas. 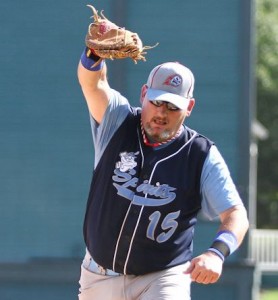