Spirits (40+) Offense Puts on Clinic in Win Over Renegades

(July 17, 2019 – Grapevine, TX) The best way to forget a silly loss is to get a win. This time, the Spirits (40+) forgot to shut off the offense as the abused the Renegades Wednesday night with a 17-hit obliteration that led to an 18 to 0 victory at Oak Grove Park.

Starting pitcher John Holmquist was solid, pitching 3.1 innings allowing just one hit while walking 2 and striking out one, and Scott finished off the night with 1.2 innings and a strikeout before the game was called due to the league’s mercy rule.

The Spirits led 1 to 0 after the top half of the first when Scott scored on an error by the Renegades shortstop. The game remained quiet until the third inning when the Spirits added 5 more runs including a pair of doubles from Sipila and Bilgere.

It was 10 to 0 in the fourth after Travis Hitzeman doubled with two outs and Lee followed with an RBI triple. Lee scored on an RBI single by David Tipton and Tipton would later score after swiping second and watching Bilgere draw a walk. Both runners advanced on a wild pitch and then scored on a single by Hefner to make it 10 to 0.

The Spirits added an 8-spot in the fifth inning that featured doubles by Bilgere and Scott, several singles and several free passes to first. Sipila grounded out with bases loaded to end the inning, otherwise the score could have been much worse.

The victory ends the regular season for the Spirits in DFW ABA league play as the squad heads into playoff action, finishing in fifth place with a record of 8-8. The team will visit the Astros in round one of the playoffs next Tuesday night on Arlington Field at Texas Star Complex. First pitch is scheduled for 8:00PM and you can click here for game details. 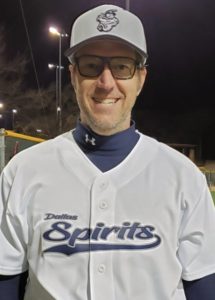