(May 16, 2018 – Dallas, TX) You can’t win them all…the infamous line our parents teach us at a young age when we deal with losing a game. It bites and it’s a solid lesson to teach, but honestly; does it really work? The Spirits (18+) squad may tell you different after they were handed their first loss during the 2018 campaign in NTABL Open National League play on Wednesday night, falling to the Outlaws by a score of 4 to 1.

Outlaws pitcher, Brandon Wilkerson wasn’t mixing up a lot of pitches to throw off the Spirits bats, however his delivery was effective and got the job done in a complete-game effort. Wilkerson picked up the victory by going the distance and finished with 12 strikeouts after allowing just one earned run on 5 hits, while walking 2.

“Well, it was a hard fought game,” commented manager, John Showalter following the loss. “We were able to get men on base, but we just didn’t get the timely hitting needed to drive runs in. Wilkerson made the pitches he needed to keep us off the board, so hats off to him and his team. They beat us tonight, but we have four more games against them this year. We’ll get ours…”

The Outlaws struck quickly in the first off of pitcher, Duane Aponte. After the Spirits left an egg in the top half of the first, Brian Gaffney singled for the Outlaws with one out. Aponte retired Wilkerson with a fly ball to record the second out, but Chance Tabor drew a base on balls off of Aponte and Kevin Brand followed with a single to score Gaffney. Nick Helton made it back-to-back singles to score Tabor and the Outlaws led 2 to 0 before Aponte retired Jeremy Soto to end the inning.

The Spirits had opportunity fall through in the second inning after Showalter singled with one out and then advanced to second after Aponte drew catcher’s interference. Wilkerson remained poised, however and was able to strike out both JR Rivera and Mike Werner to kill the inning. The teams went back and forth with a few scattered hits, but both were unable to plate runs until the Spirits finally broke through on the offensive end. Cliff Brade drew a walk to start the sixth and Nate Martinez followed with a single that allowed the speedy Brade to score from first and it was 2 to 1, Outlaws. Holden Novak reached on a fielder’s choice that squeezed Martinez at second and Kyle Redinger followed with a single to put two on with one out. Both runners advanced on a wild pitch and Teddy Croft was given an opportunity to play hero. Wilkerson settled in and was able to get Croft to pop-up and that left two on and two out for Showalter. Showalter took ball one and then crushed a line drive to left field. The solid wood off of Wilkerson was short-lived, however as the liner made its way directly to the Outlaws left fielder to kill the Spirits late-game rally.

Showalter turned to newcomer, Carlos Soto for some relief after the Outlaws made some noise in the fifth and Brand was able to draw a four-pitch walk off of Soto in the sixth. Nick Helton followed with a single and Showalter then turned to Novak to try to mix things up. Jeremy Soto wasted little time welcoming Novak to the game as he doubled off the first pitch he saw to score both Brand and Helton and the Outlaws led 4 to 1. Novak was able to strikeout the next two hitters, but it was too little, too late. Aponte and Rivera went in order in the seventh and Werner doubled to create a shred of hope, but JP Seider went down as strikeout number 12 for Wilkerson and the game was in the books.

“That’s how baseball goes,” continued Showalter. “You can be rolling one minute, and the next minute, nothing. We’ll rebound. Hopefully this win gets the hunger back in some of us. We’re going to be extremely familiar with each other come playoff time so we have to learn about our opponents and get the job done the next time we take the field.”

The squad returns to action on Sunday, May 20 as they host the Dallas Panthers at John Paul II High School at 3:00PM. Click here for schedule details, directions to the game, or to download the iScore Central app to watch and listen to the game! 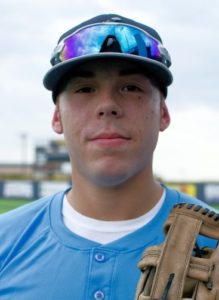