(June 20, 2016 – Plano, TX) The Dallas Spirits (45+) may have been gambling with their health on Thursday night. Between dehydration, running around all the bases, and also waiting until the last hour to find a way to win, some players’ hearts may be in need of a doctor’s review. In a last second decision to start, P Brant Finchum took the mound for the squad and had some issues with PC. If you’re thinking political correctness, you’re off a bit. Finchum struggled a bit with his command and ran into some high pitch counts. Finchum pitched 3 innings, walking 7 while striking out 1, but his bat along with some last second heroics from several players made it a game worth fighting to win and the team prevailed to do just that at Graham Field located at Prestonwood Christian Academy.

“I’m just proud of the guys,” team manager Kirk Sipila noted following the contest. “Finch(um) ate up some innings with a last moment notice to start on the bump. Fortunately he remains hot at the plate, as does Shawn Lee. The defense was solid when we needed them to be.”

Despite 3 errors costing the team 3 out of the 5 runs they gave up, there were moments of heroics that appeared to have saved the day for the Spirits. Two of those plays came from Sipila himself, who had a great game defensively, and more importantly during clutch moments of the game. Sipila snagged a line drive in the bottom of the first after Jeff Wood walked and was able to fire quickly to Brian Hackney at first base to double up the runner and end the inning. In the bottom of the third with the game tied at 1 to 1, Sipila snared a low-flying line drive up the middle with the bases loaded, ending a sure scoring opportunity for the Texas Blue Jays.

“We saw some clutch hits this evening,” Sipila continued. “Tony Davis stepped up tonight, I was able to contribute, and Shawn (Lee) provided the heroics late with the go ahead run. Apparently we’re the ‘Cardiac Kids,’ but we put it together when we needed to including the 1-2-3 shut down inning to seal the victory in the bottom of the sixth.”

The team battled back from 5 to 3 to earn a 7 to 5 victory over the Blue Jays. Brant Finchum singled in the top of the 4th inning with the game tied 1 to 1. Finchum later stole second base and the Spirits faced a runner in scoring position with two out after David Tipton executed a great surprise bunt but ran into the ball after leaving the box. Patrick Bilgere gave the Spirits their first lead with a single scoring Finchum. Bilgere stole second and then scored with another two-out hit by Davis giving the ghouls a 3 to 1 lead heading into the bottom half of the 4th. That’s when things got sour pretty quickly. Richard Highduke walked and BJ Wooley singled to give the Jays 2 on and nobody out. Ashley Bensen then walked the bases loaded and Sipila came in to replace Finchum on the mound.

Sipila proceeded to strike out the next to Jays hitters and it appeared that the Spirits would dodge another bullet, however Mitch Grau drew a walk cutting the lead to 3 to 2. Jeff Wood then reached on a throwing error by SS Eric McPherson and both Wooley and Benson scored giving the Blue Jays a 4 to 3 lead. Rob Sepanek then singled to left field scoring Grau and the Jays had themselves a 5 to 3 lead with time winding down (NTABL games are under a 2-hour time limit).

Shawn Lee singled and stole second base with one out in the top of the 5th and then scored on a single by Sipila cutting the lead to 5 to 4. McPherson singled scoring Sipila and the squad was back in the game at 5 to 5. McPherson stole second but then got caught in a run down after Brian Hackney hit a medium roller to the left side of the infield. Finchum singled advancing Hackney to second and the team seemed poised to take the lead, however the Jays were able to get David Tipton to ground out to end the inning.

With just 10 minutes left in game time, Sipila was able to get John Arnold to ground out but walked Highduke. Wooley struck out looking and the stars appeared to align for the Spirts momentarily. Benson hit a medium grounder up the middle which Sipila fielded, however his toss to first was a little too soft for Hackney and Benson was able to reach first before Hackney could get a handle on the ball. It appeared that the time was going to run out and the game would likely end in a tie, but Sipila was able to get Michaelo Conley to ground out with just 2 minutes left to play. Based on the rules, the Spirits were granted another inning to play and the Jays would have the opportunity to close out the inning as the home team.

Jeff Wood replaced Steven Strong at pitcher for the Blue Jays and Tony Davis started off the inning with a single. Jack Nash walked and John Holmquist reached on a fielders choice upon attempting the squeeze play (bunt). Davis was tagged out trying to reach home thus leaving 2 on and 2 out for Shawn Lee. Lee battled and took the count to 3-2 and then proceeded to take the payoff pitch up the middle for a single scoring Nash, which proved to be the game winning RBI. Sipila reached on error by the Blue Jays third baseman and Holmquist scored easily after reaching third on the hit by Lee giving the Spirits some added insurance.

It appeared to be all the motivation they needed as Sipila and his defense sent the team down in order giving the Spirits their 5th victory of the season and a second place spot in the league standings.

Sipila completed his comments indicating, “It was a great win for us and again, I’m proud of the guys. Sometimes you just get the W. That was fun, and let’s not forget the longest inside the park home run in adult baseball history!” Sipila and the team shared some fun regarding the inside the park home run in the third inning by right-fielder, Jack Nash. Nash dropped a line drive to opposite field that got past the Jays right-fielder. Nash circled the bases in less than flattering speed and came up a hair short on his slide into home plate, but was able to complete his journey around the pads and get himself into the books with an HR.

The Spirits will play this Saturday versus the Caddo Reds, 11:15AM at Jesuit College Preparatory in Dallas as a make-up to an earlier season rain-out. The Spirits the host the Hurricanes next Monday night at 6:45PM. Location for that contest is yet to be determined. 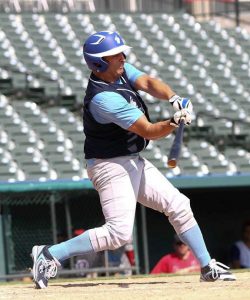 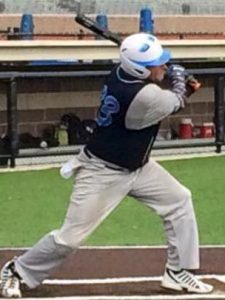 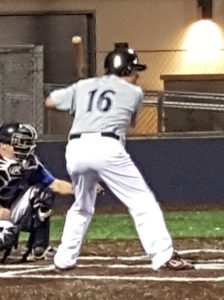