(May 23, 2022 – Farmers Branch, TX) The Spirits (45+) was in overdrive on Monday night, switching gears and scoring in the first four innings including a 4-run third inning, and a 7-run fourth inning. The team exploded for 16 hits on the night with every hitter except one hitting safely, and all 9 players reaching base safely at least once. In additional to great hitting, every player on the team with the exception of one recorded at least one run batted in.

John Holmquist was great on the hill, trading in his outfield nickname of “John Deere” for “Dirty John,” representative of his combination of pitches and mixing up the zone. Holmquist went the distance in a shortened-game victory due to the league’s two-hour time limit, allowing 2 earned on 7 hits while walking zero, and striking out 3.

The Spirits picked up an early 1 to 0 lead after Lee was hit by a Phil Luna pitch with two outs in the first. Lee swiped second, and then scored on an RBI single by Sopocy before Chris Lewis flew out to end the inning. Holmquist set the Thunderbirds in order to end the bottom half, and the Spirits picked up run number two in the second following a one-out walk by Earl German, and a single by Bedford. German was able to score after Holmquist grounded out, and the Spirits held a 2 to 0 advantage after one and a half played.

The Thunderbirds cut the lead to, 2 to 1 after back to back singles by Gregory Anderson and Harvey Carlisle. Andy Chatham reached on a fielder’s choice that squeezed Carlisle at second and allowed Anderson to move to third. Chatham stole second base, and a ground out my Crombie allowed Anderson to score as the Spirits infield tried to turn a pair. Holmquist was able to get Paul Dominguez to fly out to end the rally.

The Spirits then opened up for 4 runs in the third after 3 straight singles by Sipila, Lee, and Sopocy. Lewis reached on an error that allowed Sipila to cross the dish and 2 more runs scored after Brian Hackney ripped a hard single to left field to plate Lee and Sopocy. Hackney was tagged out at second trying to stretch his single into a double, and Lewis was able to score on the throw to make it 6 to 1, Spirits before German flew out. Bedford singled to keep the inning alive, but Holquist later grounded out to end the Spirits half of the inning.

Holmquist held the Thunderbirds quiet in the bottom frame and in the fourth, the Spirits opened up the scoring with a 7-spot. Tipton doubled to lead things off and a single by Sipila moved him to third. Sipila stole second and Lee followed with a double to the wall to score both runners. Lee moved to third on another single by Sopocy, and a double by Lewis scored Lee. German, running for Sopocy was tagged out trying to take third base. Lewis then stole both second and third before Hackney was walked, and another walk to Bedford loaded the bags for German. German hit a fly ball to center that was deep enough to score Lewis on the sacrifice fly, and the Spirits had a 10 to 1 lead. Bedford drew another base-on-balls and Holmquist was hit by a pitch 4 pitches later.

With the bases juiced, the Thunderbirds turned to Jim Crombie to try to stop the bleeding. Tipton greeted him with an RBI single that scored Hackney, and Sipila greeted him with a double that reached the wall, allowing both Bedford and Holmquist to score before Lee popped out to end the inning.

Things remained quiet until the sixth, and the Spirits broke the silence by adding another pair of runs after German singled to lead off the inning. Three straight walks to Bedford, Holmquist, and Tipton scored another run for the ghosts, and an RBI single by Sipila scored Bedford to give the Spirits their final run on the night before Crombie was able to finally retire the next three Spirits hitters.

The Thunderbirds scrambled for a run in the sixth before the game was called due to the league’s 2-hour time limit for games and the Spirits had a 15 to 2 win to close out Monday night.

“Great bats tonight,” Lee mentioned after the game. “Everyone played really well. Only one error in the field, and hitters taking advantage of runners on base. That’s a lethal combination. (John) Holmquist was great tonight on the hill and as expected, (Kirk) Sipila continues to hit the cover off of the ball. David (Tipton) did a nice job filling in at the leadoff spot seeing as we were short handed tonight, and Mike (Sopocy) always seems to comes through with runners on base. Lester (Bedford) played well too. Very patient at the plate tonight. I don’t believe he made any outs…reached all four times. Hopefully we can keep up this momentum moving forward.”

The team gets back to action following a week off due to the Memorial Day holiday. The Spirits will play host to the Rattlers on Graham Field on June 6th with a 6:45PM first pitch. Click here for schedule details or to download the iScore Central app to listen online, be sure to click here. 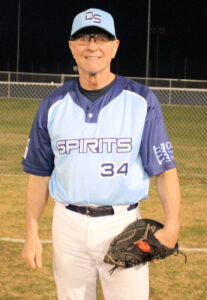