(April 29, 2019 – Carrollton, TX) The formula for Spirits baseball seems to be hardening into formation as the Spirits (35+) squad continues to evade the win column in NTABL Veterans League play. That formula consists of getting a lead, watching that lead trickle down and then seeing that lead disappear. The good news for the team is that the season is still young and that the team also appears to find a way to make a contest out of it when hope appears to have initially have been lost.

That same old song and dance played out again Monday night as the Spirits hosted the Royals at McInnish Park, Field #10 in Carrollton. The Royals took advantage of five Spirits fielding errors and 11 players left on base to sneak out a 9 to 7 victory, despite yet another attempted come back by the Spirits after giving up a 4 to 1 lead. After holding a 4 to 3 lead heading into the fifth inning, the game instantly turned into merry-go-round after the Spirits gave up 6 runs with 3 straight fielding errors in the inning.

Spirits starting pitcher, Jonathan Duran looked good from the get go after striking out the first hitter he faced and then getting Scott Jeffries to fly out. Robert Brown was able to stick his bat out for a two-out single and hit pay dirt after Stefan Klock jacked a double to the left field wall. Duran was able to get out of the inning, but the big hit gave the Royals a 1 to 0 lead.

The Spirits then rallied for a run in the bottom half of the inning after Eric Goetz hit a one-out single and then swiped second. Kirk Sipila‘s RBI single tied the game, but Royals starter, Richard Campbell was able to get Travis Hitzeman and Shawn Lee to fly out to end the inning.

The Spirits made it 2 to 1 in the second after Patrick Bilgere drew a lead off walk and later scored on a triple by Eric McPherson. The Spirits were happy to see McPherson in the lineup after he was diagnosed with a fairly severe should injury. The injury may sideline McPherson from the field for the foreseeable future, but the Spirits will continue to use his bat and his dugout presence as long as McPherson is interested in continuing his career with the team. Campbell was able to recover after McPherson’s big hit to the left-center field wall by striking out Duran and John Hefner to end the inning.

The Spirits then made it 4 to 1 in the third after David Tipton led off the inning with a single and stole second. Brant Finchum flew out and Goetz drew a walk. Sipila then popped out to record the second out of the inning, but back-to-back RBI singles by Hitzeman and Lee scored both runners to give the Spirits a 3 run lead.

A pair of Spirits fielding errors then allowed the Royals back in the game as they picked up a pair of runs in the fourth. The Spirits had an opportunity to capitalize in the bottom half of the inning after loading the bases with one out, but Tipton watched a strike three call and Campbell was able to get Finchum to pop out on the first pitch and the Royals took the momentum into the fifth inning. Fast forward to three additional fielding errors and the Spirits watched the Royals put up 6 runs despite Finchum coming in for damage control and recording a pair of strikeouts to help the Spirits get out of the inning.

“Not sure what to say,” commented Lee following the game. “I’m seriously at a loss for words. Five errors doesn’t get it done. We outhit them 13 to 7, but we kicked the ball around for one inning and once again, add a few timely hits and it turns out to be catastrophic for us. We’re 3-9-1 this year overall and we seem to be in a little trouble right now.”

The Spirits narrowed the gap after Goetz led off with a single and then stole a pair of bags. Sipila grounded out, but Hitzeman followed with an RBI single to score Goetz. Lee and Bilgere also singled and Hitzeman scored to cut the lead to, 9 to 6. Campbell was able to get Bobby Kornhauser on swings and McPherson to ground out to kill the rally and the game headed into a shortened sixth inning due to time constraints.

After Finchum set the Royals down in order, Hefner reached on an error with one out. Tipton then singled and Finchum reached on a fielder’s choice that squeezed Hefner at third to give the Royals two outs. Goetz followed with an RBI single to keep hope alive, but Sipila’s rocket down toward third base put a sudden, door-slamming effect on the loss for the Spirits as the Royals third baseman snared it before Sipila completed his recoil and the game was over.

“We’re down, but we’re not out,” continued Lee. “Losing sucks, but we’ll figure it out. We still have help coming and we have a few guys that need to heal and are healing. It’s a long enough season that we’ll be singing a different tune soon, just not soon enough.”

The squad returns to its normal night of action, Thursday of this week, but it’s likely that rain will spoil that return. They are currently scheduled to host the Dodgers at First Baptist Academy in south Dallas starting at 6:45PM. Click here for schedule details. The Spirits (40+) squad has been idle for three weeks and it’s likely to be four after this week’s scheduled rain. The team is scheduled to host the Drillers on Wednesday night at Texas Star, Arlington field at 8:45PM. You can click here for those schedule details. 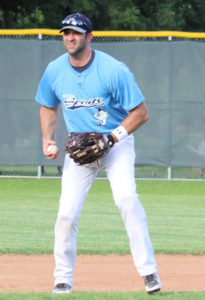