(May 9, 2017 – Plano, TX) If you’ve ever picked up a TV Guide, or are old enough to even know what the magazine is, you recall skimming through it to look for programming and shows worth watching so you could plan your evening in front of the tube. For each listing, you’d find an indication of what the programming was including “Movie” or “Sports” and it was typically followed by an adjective describing a type, such as “Drama” or “Thriller.” Tuesday night would have found the Dallas Spirits Open (18+) squad under both of those categories as the team found itself in a tight ball game for the second game in a row. The team came into the night in second place in the NTABL Open American League with a record of 8-2, while the Old Fashioneds came in at just 2-5 on the season. As is often the case with the great game of baseball, records do not always reflect the events that transpire during the course of actual game play.

Making his debut for the Spirits Tuesday night was Spirits (35+) veteran pitcher, Jonathan Duran. Duran was able to get the job done, getting Old Fashioned hitters to make contact, but unfortunately the Spirits defense had other things in mind. While beginning to define the evening’s foreshadow effect, the Old Fashioneds started fast. Stephen Zike reached immediately on a Spirits error and Eric Barton walked. Rob Bush followed with a single off of Duran to load the bases with nobody out. Jacob Martin promptly flew out to complete the sacrifice fly and the Spirits were down 1 to 0. Duran then pegged Dan Gross to reload the bases and catastrophe struck when Mark Shronka doubled to empty the base paths. Duran was able to regroup and get Chris Corbeille and Garett Vascil to fly out, but the initial damage was done and the good guys were down 4 to 0.

The Spirits followed with a brief answer in the bottom half of the inning when lead off man, Cliff Brade reached on a sharply hit single up the middle. Nate Martinez followed with single through the pitcher’s legs on a 2-2 count, which pushed Brade to third following a stolen base. With runners at the corners and nobody out, slugger Collin Stacha to an 0-2 pitch deep enough to center field to complete the sacrifice fly to drive in the Spirits first run of the night.

The Old Fashioneds countered in the second when Austin Bazar singled and later reached second when Eric Dzurisin singled with one out. Duran was able to get Stephen Zike swinging, but Barton returned to the plate and singled as well to score Bazar. After the Spirits were set down in order in the bottom half of the inning, the squad found themselves trailing 5 to 1. The next two innings went scoreless for both teams and as the Spirits entered the bottom half of the fifth, it was clear that there was a small sense of anxiety brewing as weekday games in the NTABL only go for seven innings. With one down in the fifth, third baseman John Showalter lined a single in the gap between third and short. Second baseman, Mike Werner followed by reaching on an error, pushing Showalter to second and he later scored after Carl Suverkrop reached on another Old Fashioneds error. With runners at the corners and one out, designated hitter Steven Baker drove an 0-1 pitch to deep center to score Werner and to narrow the Old Fashioneds lead down to 5 to 3.

Following a one out single and a double-play to shut down the Old Fashioneds quickly in the sixth, the scoring rally continued for the Spirits as they entered the bottom half of the inning. Right fielder, Adam Brown led off the inning by reaching base for the second time with a sharp single up the middle. Brown would advance to third on a single by Justin Anderson and the momentum switch was building like an old Rocky movie. Anderson was able to nab second base, but both runners were held in check when Thomas Stoltz hit a slow roller to third and the only play was to first. With two runners in scoring position and one down, first baseman Eric Goetz stepped up for opportunity in the spotlight. Goetz has been a productive offensive force for the Spirits all season and he wasted no time jumping aboard the rally by grounding the ball to the right side of the infield. Brown was able score on the play, which also pushed Anderson to third. With two out and the tying run at third, the Spirits clutch lead off man, Cliff Brade returned for another at-bat. Brade came to the plate with purpose on his mind and he achieved just that on the first pitch he saw as he drove the pitch deep into the right-center field gap for a game tying double. Martinez was the next would-be hero, however the Old Fashioneds were able to get him to ground out. After six complete, the Spirits had tied the game, 5 to 5.

“I knew we had the right guy at the plate in that situation,” mentioned Showalter after the game. “Cliff is such a dangerous weapon at the plate. Even with two outs in the inning, I had complete faith in him. And he looked determined. Apparently so, because that pitch didn’t have a chance. We were hoping to utilize his speed and get him in as well, but they were able to pinch Nate to shut us down. Great clutch hitting from Brade.”

The Old Fashioneds returned for top half of the seventh and final inning finding the game they had led from the start now tied. Momentum had certainly shifted to the Spirits favor. Showalter called upon pitcher, Thomas Stoltz to shut down the ‘Neds and he did just that. After striking out Vascil, the Spirits infield didn’t appear content enough to shut things down as their fifth error on the night allowed Bazar to reach. Stoltz was able to get Coleman McKinney swinging, but followed by beaning Dzurisin to put two on with two out. The drama was short-lived however, as Stoltz was able to get Zike to fly out thus setting the scene for bottom of the seventh dramatics.

The Old Fashioneds chose to go to their bullpen as well, and McKinney took the bump for the game’s final inning. Collin Stacha returned to the dish and took the first pitch he saw deep to left field. As the ball carried over the head of the left fielder and the crowd of Spirits supporters cheered, Stacha coasted into second base with a stand-up double. Showalter entered next for hero opportunity and quickly found himself down, 1-2. McKinney then followed with a curveball to the dirt and Stacha was able to advance to third on the wild pitch. With the pressure squarely on the Old Fashioneds, they chose to move their infielders in to cut off the potential winning run at home. Showalter followed with a hard ground ball to the shortstop, but wasn’t able to fulfill destiny as the ‘Neds shortstop was able to look back Stacha and then complete the throw for the out.

“Hats off to their shortstop. In a pressure situation like that, he made the play,” commented Showalter following the play. “I was disappointed I didn’t get the job done, but we were certain that Mike would make good things happen for us.”

The irony in those words were thick as Werner has been in a self-described slump over the past few games. With the winning run at third and one out, the Spirits second baseman walked up to the plate. After taking ball one, Werner took a deep breath and stepped back into the box and promptly took the next pitch he saw fast and between the Old Fashioneds drawn in infielders for a game-winning RBI single to left as Stacha crossed the plate to complete the storybook walk-off victory for the Spirits. The dramatic come-from-behind victory extends the Spirits record to 9-2, where they remain a full game behind the 9-0 Pelicans.

“This was a big win for the guys; a real character-builder,” commented Showalter following his team’s walk-off victory. “The Old Fashioneds played well tonight, but we had just enough left in the tank to bring it home in the end. I could not be more proud of the guys. This was a team victory. Each man on our squad played a role in getting this win and this is one of those fun ones that can really spark your team down the stretch.”

The Spirits will have their opportunity to challenge the league-leaders next Tuesday night as they travel to Reverchon Park in Uptown to visit the Oak Cliff Pelicans with an 8:45PM first pitch. Click here to view game details or to watch online. 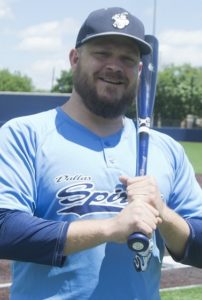