(November 6, 2019 – Carrollton, TX) It only took 17 days, but the NTABL finally let the Dallas Spirits play baseball and the rust almost proved to be a fatal blow, however the squad found enough skill at the bottom of the tank to pick up the 5 to 2 victory Wednesday night. The win put the Spirits in the NTABL Brazos Division Championship for fall baseball on Sunday afternoon where they’ll face a familiar foe, the Knights, who upended the Caddo Reds by a score of 7 to 4.

“We’re happy to be here,” mentioned team skipper, Shawn Lee. “The layoff was brutal, but it wasn’t completely the league’s fault. We had a rain out that cost us a game, but I’ll be getting after the league once again for penalizing us for winning during regular season play. I don’t think that teams that win one game should make the playoffs. You even up the squads and you get teams playing. Sitting for 17 days after winning the league outright is no way to reward a team for working hard. But that’s details. Right now we’re happy to be playing baseball.”

In the mean time, the Spirits looked great to start off the game. You wouldn’t have known there was some rust build up when the game started as the team turned to their ace, Craig Molldrem and he picked up right where he left off both from his last appearance and his effectiveness prior to Tommy John surgery last year. Molldrem shut down Hurricanes hitters for the first three innings, allowing no runs and no hits, while walking one and striking out 7. The former MLB pitcher has kept his appearances short as he works diligently to rebuild his arm, so the squad later turned to Jonathan Duran and Duane Aponte to stave off any thoughts of a come back.

The Hurricanes had other ideas however, and despite a 5 to 0 start through four innings, they made a game of it and proved why they were last season’s fall champions. Things started off quickly for the Spirits offense before they started to leave runners stranded throughout the rest of the game. After Molldrem struck out the side to begin the game, Cliff Brade flew out to the infield, but Eric Goetz followed up with a single and then stole second base. Goetz also swiped third and two pitches later, the Spirits had runners at the corners after Kirk Sipila wore a pitch from Hurricanes starter, Thomas Mohlner. Molldrem followed with a single to score Goetz and push Sipila to second and Lee followed up by reaching on a fielder’s choice that left two on after Sipila was squeezed at third. With Brade running for Molldrem at second, both runners took off on the next pitch to Patrick Bilgere and the Spirits once again had runners in scoring position. Bilgere promptly followed with a 2-RBI single and the Spirits had a 3 to 0 lead before Aponte reached after being hit by pitch and David Tipton went down on swings to end the inning.

Molldrem followed suit in the top half of the second by striking out Raul Ponce, but Larry Rinder broke the ice with a grounder, but went down 6-3 on the play for the second out of the inning. Michael Madsen then ended the inning with a pop-up to Molldrem and the Spirits remained in charge. The Spirits were then quiet in the bottom half of the inning, despite a hard single by Duran. Molldrem then picked up strikeouts 5, 6 and 7 with a walk in between delivered to Bobby Michaelides and an opportunity to capitalize in the bottom half of the inning fell short when Tipton flew out with bases loaded after Sipila and Bilgere reached on singles and Aponte was once again hit by a pitch.

Lee then turned to Duran in the fourth inning and even though Brad Petty led the inning off with a single, the Spirits defense remained stingy and held the Canes scoreless. The Spirits offense then came back to life in the bottom half of the fourth after John Hefner reached on a one-out single. Brade flew out to leave one on with two down, but Goetz kept the inning alive with a single after Duran swiped second while running for Hefner. The hit moved Duran to third and Goetz then promptly swiped second. Sipila came through once again as the team’s “old reliable” knocked in a single to score both runners and the team was up, 5 to 0.

The Hurricanes finally broke through in the top half of the fifth when Madsen reached on a one-out single. Paul Dominguez grounded slowly to Duran and he turned to spin two, but delivered a bouncer to second base. Lee was able to field the grounder and oust Madsen at second, but he couldn’t pull the trigger fast enough to spin two. Dominguez swiped second and on the following play, Lee overthrew Molldrem in an attempt to end the inning with a ground ball, but the miscue allowed Dominguez to score the the Hurricanes were on the board. Matthew Diamond was then called safe on a play that should have easily been recorded as a 4-3 put out and after a few words and a very unnecessary outburst by the field umpire, the Hurricanes remained in business after Mohlner grounded to Lee and he flipped to Bilgere for the out that never was as the field umpire reiterated his feelings from the previous call by allowing Diamond to be safe at second. Before things got out of hand for the Spirits, Duran rallied to strike out Brad Petty and the inning was over.

“Yeah, really didn’t like the umpire controversy,” continued Lee. “Patrick and I were actually chuckling a bit over the call on Diamond and honestly, didn’t get out of line at all. The big guy turned around and completely reprimanded Bilgere for no reason. I could see if we were being out of line, but it really came out of nowhere. I thought the call that followed was cheap. You can be mad, but be honest. I’m not taking a thing away from the Hurricanes. Great group of guys and they were getting after Duran for a minute, but when the umpires insert themselves in the game? Nope. I have no place for it. Be honest or get off the field.”

Lee wasn’t able to turn his anger to fruit as he completed his 0-for-3 evening by grounding out to lead off the bottom half of the inning. The Hurricanes made quick work of the squad as Bilgere then flew out on the next pitch and Aponte eventually went down swinging. With a bit of momentum and confidence now brewing, the Hurricanes returned to offense and picked up where they had left off as well. Lee turned to Aponte to finish up the night and he was greeted by a single from Terry Helm. Mike O’Hornett replaced Helm at first after reaching on a fielder’s choice that squeezed Helm and after O’Hornett swiped second, he advanced to third when Ponce grounded out to the right side. Rinder then followed with a single and the Canes cut the lead down to, 5 to 2 before Madsen went down swinging.

Tipton then led off the sixth with a base-on-balls, but after Duran flew out, Tipton was caught leaning and was picked off at first. Hefner flew out to end the inning and the Hurricanes returned to bat in the game’s final inning with rally-or-go-home opportunity ahead of them. The Spirits defense remained calm and fortunately for them there was no rally in sight as Dominguez, Michaelides and Diamond went in order and the Spirits picked up the victory.

“Hats off to the Hurricanes and Kirk Pruitt,” continued Lee. “They’re a great group of guys and I love playing with and against them. I’m sure it appeared that it would be a wall to climb having to face Molldy (Molldrem), but they didn’t back down one bit. Love that with that group. We’re looking forward to the challenge we’ll face Sunday with the Knights. Hat’s off to Craig, Patrick and Sipila tonight as well. They didn’t show any rust and thankfully the group of them carried us to victory.”

The team will be on the field for the NTABL’s final game of the season and 2019 this Sunday as they host the Knights at Graham Field on the grounds of Prestonwood Christian Academy. You can click here for schedule details and directions to the game. 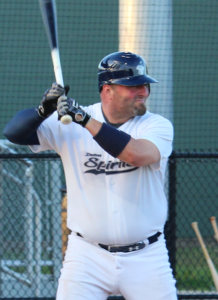