(March 27, 2017 – Dallas, TX) If you want to be game ready, you may as well go up against the best. Perhaps that’s a great philosophy in most sports, especially basketball. It provides your team the opportunity to be challenged at the beginning of the season to better prepare them for the rest of the season. Let’s hope that stands true for the Spirits (45+) team who opened their season against the 2016 regular season champion Dallas Orioles. The game was a bit of a pitcher’s duel when looking at the box score, however the old fellas seemed to be not only ready to play, but poised for the occasion at Graham Field on Monday night.

The Spirits used 7 hits and a mid-season form defense to shut down the NTABL Masters League juggernaut, allowing them only one run on two hits as they edged the Orioles by a score of 2 to 1. The Spirits only managed the 2 runs off of the 7 hits, but left 11 runners on base throughout the game. They were poised to score, but let a few choice opportunities to provide insurance fall through their hands. The Spirits started the scoring first by breaking the ice in the bottom half of the second inning.

First baseman Brian Hackney started the inning with a free pass after getting hit in the foot by a pitch. Left fielder Shawn Lee drew a walk and the Spirits were in business with runners on first and second. Designated hitter Chris Lewis hit a soft roller to Jerry Gamez at shortstop who relayed to John Mahalik at second to squeeze Lee, but on the attempt to throw out Lewis for the double play, Mahalik’s throw was erroneous. Lewis made it safely to first and Hackney was able to score from second giving the Spirits a 1-0 lead. Newcomer Mark Leemaster drew a walk and catcher Patrick Bilgere popped out to the infield. Additional newcomer and NTABL star and veteran Earl German broke in his Columbia Blue and Navy colors by drawing a walk as well to load the bases for right fielder Dennis Gonzalez. Gonzalez hit a sharp grounder toward first, however Orioles first baseman Will Nash was able to vacuum up the roller and to step on first to end the rally.

In the top of the third, lead off hitter Chris Allen drew a walk from Spirits pitcher John Holmquist and the Orioles had one on with nobody out. Dennis Sutton then grounded out to Hackney at first, pushing Allen to second. Chuck Difiglia then grounded out to Holmquist and it appeared the Spirits would sneak out of the inning unscathed, however Dave Huskey hit a medium line drive to left field that appeared may be caught by Lee, but he came up a bit short and could only field the ball without an opportunity to make a throw home. Holmquist was then able to get Mark Tierny to pop-up to the infield to end the top half of the third with the score tied 1-1.

The game remained quiet for a few innings with the Spirits sending a few base runners without any runs, however opportunity presented itself once again in the fifth inning. After shortstop Brant Finchum snared a line drive and potential base hit from Nash, Holmquist walked Chris Cec putting one on with one out for the Orioles. Holmquist followed up by striking Allen on the back side with his next pitch and put Cec in scoring position. Team skipper Kirk Sipila felt John had done a good enough job to hold the Orioles at bay up to that point and proceeded to bring in the veteran left-hander German to take over. German took Dennis Sutton to 3 and 0 before finding his groove. German battled back to 3 and 2 before getting Sutton to fly out to Finchum at short, leaving two on with two out. Difiglia then grounded to Finchum who just barely got Allen sliding into second for the force to end the inning.

Heavy hitting and former college pitcher Philip Bosco took the hill for the Orioles in the Spirits half of the fifth. Bosco walked Lewis to start the inning and Leemaster then hit a soft single to left-center to put two runners on with one out. Bilgere then laid down a perfect bunt to move the runners, however the Bosco wasn’t able to track it fast enough as Bilgere made it to first safely to load the bases for the Spirits. German then played hero on the offensive side, tagging a Bosco fastball hard and fairly deep to right, easily scoring Lewis for the sacrifice fly. Gonzalez then grounded to Bosco who made the easy play to first, but the job was done moving the runners to second and third. The Orioles remained poised however, and were able to get center fielder David Tipton to ground out to end the inning.

From there it was all German and the Spirits defense. German struck out the first two Orioles in the top of the sixth and pinch hitter Gerry Mecca then popped out to first to end the sixth. The Spirits once again made some noise in the sixth as second baseman Jack Nash singled and was pushed to second on a single by designated hitter Eric McPherson. Finchum moved the runners to second and third with a sacrifice bunt and the team appeared it would add some insurance to its 2-1 lead. Spirits newcomer and third baseman Guy Koenig reached on a fielder’s choice after the Spirits played some circus base running on the play. McPherson forced Nash from third and then returned to second and the Orioles played a game of “Pickle” chasing down the Spirits runners. Sipila then popped out to the infield and Bosco was able to strike out Hackney to end the rally.

The Spirits then closed the game defensively with three ground balls as Finchum, Koenig, and Nash each were able to cleanly field rollers and make solid throws to first base to seal the Spirits victory.

“Tonight was a great game played by two very good teams,” noted team manager Kirk Sipila following the contest. “Our pitching and defense for a first game of the season were exceptional. Situational hitting, bunting, solid base running…each of these tangibles factored in allowing us to score two runs. You can expect that in a game that’s going to be close and our boys were spot on tonight. Holmquist and German were lights out tonight on the bump and they kept the Orioles hitters off balance all evening. I’m extremely proud of our guys. We executed two sacrifice bunts and scored on a sacrifice fly. Those small plays were the difference in the game. German shut them out in three innings of relief and picked up the victory, while Holmquist goes nearly four innings and only gives up one run to arguably the best team in the league. Gold glove effort by the entire defense, including some great plays by Hackney at first base on a few errant throws. It was an exciting way to start the season and we’ll enjoy this victory and get prepared for the Hurricanes next week.”

The Spirits (45+) squad returns to action next Monday as they visit the Hurricanes at Graham Field located at Prestonwood Christian Academy. First pitch is at 8:45PM. 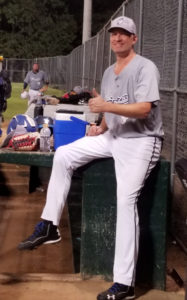