(November 11, 2020 – Euless, TX) It was a solid effort in an attempt to erase an awful start, but the mountain was too high to climb for the Spirits (40+) squad Wednesday night as they saw their 2020 season come to an end. The mountain, in the form of the Rattlers ball club opened up the game with a fast start only to see the Spirits rage back and gain momentum, but the solid-hitting squad kept its composure and went on to cruise to a 15 to 9 win to advance to the DFW ABA League championship next week. 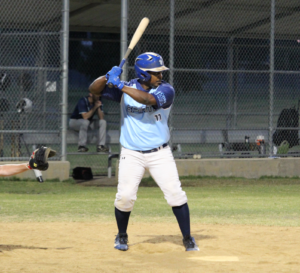 David Tipton helped lead the Spirits offense Wednesday night with a pair of hits including a double. Tipton scored twice and also added a pair of runs batted in. The Spirits lost to the Rattlers, 15 to 9.

Ravi Malick, Ryan Wettengel, and Stephen Smith each added a pair of RBIs for the Rattlers with Daron Wilkinson chiming in with a double and 4 RBIs of his own to carry the snakes to victory. Pitcher, Nathan Phillips wasn’t a huge wall to climb for Spirits hitters, but a lack of consistency combined with a failure to take advantage of a few different game scenarios proved to be too much for the Spirits to overcome. It was Travis Hitzeman and David Tipton highlighting the offensive box score for the ghouls as each finished with a pair of hits on the night. Hitzeman finished with a pair of doubles and 3 runs batted in while Tipton added a double of his own and 2 runs scored and 2 RBIs.

The Rattlers picked up 3 runs in the first inning following a pair of walks given up by Spirits pitcher, Duane Aponte. Despite a pair of strikeouts to match, the Ratters capitalized with a double from Wilkinson that scored both runners who earned free trips to first. Christopher Brooks was hit by a pitch to keep the inning alive and it cost the Spirits another run after an RBI single by James Bolton scored Wilkinson before Wettengel flew out to end the Rattlers half of the inning. That cloud hovering over the head of the Spirits only grew darker after the Spirits went in order in the bottom half of the inning only to get back onto the field for defense just minutes later.

Scott Rodges led off the Rattlers second with a single, stole second and then later scored on an RBI single from Stephen Smith and the Rattlers had a 4 to 0 lead after Aponte picked up another pair of strikeouts before the frame was finished. The Spirits were then able to get on the scoreboard after Dan Sosa reached on a two-out single. Sosa was able to score on an RBI double by Bobby Kornhauser before Stacy Scott grounded out to end the inning with the score now adjusted at 4 to 1.

Doubt began to settle in during the top half of the third when the Rattlers picked up another 3 runs when Justin Harris led off with a single and scored on a follow up double by Aaron Lowe. Wilkinson continued to rake in stats with an RBI single to score Lowe and he later moved to second after Brooks singled. The Spirits started to warm up Kornhauser in the bullpen with hopes of slowing the bleed at some point, but after Bolton flew out it was more of the same. Wettengel doubled to score both Wilkinson and Brooks and a single by Rodges moved him to third. Rodges swiped second and a sacrifice fly ball to left field later, Wettengel was across the plate and it was 9 to 1, Rattlers after Todd McClurg flew out to end the run-producing machine.

The Spirits didn’t fold however. Following a pair of ground ball outs, Tipton doubled and then scored on a single by Eric McPherson. A single from Kirk Sipila moved McPherson to second and an RBI double from Hitzeman scored McPherson before Shawn Lee flew out to end the inning. The Spirits then turned to Kornhauser to face the Rattlers in the top half of the fourth inning and it didn’t take them long to produce another pair of runs. Marcos Vidal III lined out, but Malick singled and then advanced to third on a double by Justin Harris. Lowe drew a walk to load the bags and 3 pitches later, Malick was able to score on a wild pitch. Wilkinson eventually grounded out, but Harris scored on the play before Brooks grounded out to end the inning with the Rattlers now leading 11 to 3.

Perhaps focusing on an easy win, the Rattlers defense then lost a bit of focus on the field. Kornhauser was hit by pitch with one out and Scott drew a base-on-balls to put two aboard. Brant Finchum popped out for an infield fly call and it seemed the game was closed to heading into the books. But John Hefner kept the inning alive after reaching on a Rattlers fielding error and with a bit of life still left in them, the Spirits began to rally. Tipton singled to score both Kornhauser and Scott and after McPherson reached on another Rattlers error, Hefner was able to cross the plate. Sipila reached on the third error by the Rattlers in 3 plays and with bases loaded, Hitzeman doubled to score both Tipton and McPherson. Lee followed with an at-bat that went to 3-2 and won the battle with a single up the middle to score Sipila and after Lee swiped second with just minutes left on the league’s two-hour game time limit, Sosa grounded out. The good news on the play is that the game would be extended another inning and the Spirits were now only facing a 2 run deficit after a 6-run fourth inning the score was now 11 to 9, Rattlers.

Unfortunately for the Spirits, the comeback was short-lived as the Rattlers went on to add to their lead. Bolton led off with a single and Wettengel drew a walk. Bolton then took off for third before Kornhauser offered and the veteran pitcher wisely stepped off and the Spirits were able to get him out following a short run down that allowed Wettengel to take second. Rodges drew another free pass to first and the Spirits then turned to Sosa to close out the jam. Sosa was able to get Smith to fly out and with two outs the Spirits seemed in business. McClurg then blasted a high fly ball to left field that seemed to be routine, but Aponte who had replaced Lee in the outfield lost sight of the ball going into the glove and the ball rolled out and onto the turf allowing both Wettengel and Rodges to score. Vidal followed up by drawing a walk and a double by Malick scored both runners and essentially slammed the door on the Spirits season. Sosa was able to get Harris to ground out, but the damage was done and the Spirits were now facing a 6 run deficit heading into the game’s final frame.

The Rattlers again turned to McClurg to close up shop and he delivered by setting the Spirits in order after getting Kornhauser to fly out and striking out both Scott and Finchum.

“Not really the way we want to go out,” Lee commented following the team’s loss. “We had a pretty rough go of it tonight. We made a lot of mental mistakes and this is a team you just can’t do that with. Every guy in their lineup can hit so mistakes, walks, errors; they just turn into runs. We were pretty excited to get back into the game but it was their night; their series. Best of luck to them in the championship. We had an interesting season this year and we have some plans to rebuild a few things to make us more competitive for next season. Until then, we’ll just let a few things heal and hope for another opportunity to play baseball considering this pandemic. Proud to play with this group of guys and I’m sure they get sick of my saying that I’d rather lose with them than play with anyone else. We have a great squad. Love these guys. So until 2021, we thank our wives, family and our fans for sticking with us.”

The Spirits would like to thank all of their followers and more importantly, their team supporters and those who donated to help make Spirits baseball successful. Area businesses and supporters of the Spirits include Core Physical Medicine – Coppell, Waxahachie Autoplex, DJ Sean Lee, J Macklin’s Grill and DG Threads. These area businesses are all top shelf options that the club recommends at the highest level. Please give each of them a chance at your business.