(September 7, 2022 – Euless, TX) It was a battle of talent, and one could argue that the pedigree of baseball favored #SheGone. Consisting of mostly former MLB and Minor League players, the newly converted team added new talent for the fall campaign, and it was easy to see that the Spirits were likely facing off against one of the best teams in Dallas to start off the DFW-ABA Fall 40 League.

), the good news for the Spirits was they brought with them their own pedigree in the form of Craig Molldrem. Molldrem, a former NCAA and product of the Florida Marlins returned to the ghosts and took the mound in the Spirits defense.

The Spirits battled through 8 strikeouts from #SheGone starter, Lee Gwaltney, who held the Spirits to just 6 hits on the night. The Spirits also battled through 4 defensive errors, but made plays when they needed to, and also made their hits against the former Minor League pitcher count as they battled to a 7 to 3 victory.

Eric McPherson finished with a pair of hits and runs scored, along with an RBI, and Shawn Lee added a single and a pair of runs batted in to help lead the Spirits offense. David Tipton and Stacy Scott each walked twice, with Scott adding an RBI, and Tipton adding a pair of runs scored alongside a single on the night. Jonathan Duran also finished with a single, a huge hit in the top half of the sixth to add an additional run batted in for the ghosts. Duran also walked and scored twice to help pace the Spirits.

McPherson reached on an error to start the game and stole second base a few pitches later. Scott was able to reach on an error as well that allowed McPherson to reach third. Lee followed with a single to right center field to score McPherson and the Spirits held an early 1 to 0 lead. Molldrem grounded into a double-play and Mike Sopocy went down on swings to assist #SheGone in getting out of the inning but the Spirits held the early advantage.

#SheGone tied the game in the bottom half of the inning after James Bolton led off with a double and moved to third after former Red Sox infielder, Jeff Frye singled. Billy McDaniel reached on a Spirits error that allowed Bolton to score, but Molldrem rebounded by striking out Justin Hatcher. A ground ball up the middle was fielded by Lee at shortstop, and Lee was able to stop onto second and relay to Chris Lewis at first to pick up the unassisted double-play to get the Spirits out of the inning.

Gwaltney struck out the Spirits in order in the second, and Molldrem added another strikeout during a 1-2-3 inning as well and the game remained tied, 1 to 1 after two complete.

The Spirits offense then opened up for 3 more runs in the third inning after Tipton led things off with a walk. Duran also drew a walk, and a single by McPherson loaded the bags with nobody out. Scott was awarded first after his bat made contact with the catcher to give the Spirits their second run of the game. Lee reached on a fielder’s choice that allowed Duran to score as #SheGone attempted to turn a pair but Lee was able to beat out the throw. Molldrem then drew a walk, and a follow up RBI single by Sopocy gave the Spirits a 4 to 1 lead before Earl German lined out and Lewis went down on swings.

Molldrem was able to get Chris Durbin to fly out ot start the bottom of the inning, but Mike Huber was able to reach on another Spirits fielding error. Molldrem then struck out Richard Valle. Bolton followed with a single up the middle and #SheGone attempted to send Huber home, but Tipton relayed a throw home to cut him down and to get the Spirits out of the inning.

The game remained quiet until the bottom of the fifth when #SheGone rallied for a pair of runs to cut the Spirits lead down to, 4 to 3. Charles Bolton and Jason Garza both singled. Bradon Glazner followed with a single that allowed Bolton to score, and Garza followed him to the plate after Duran missed a throw from Tipton on the relay to third that may have had Garza out in his tracks. Molldrem then struck out Benjamin Cornish, but Durbin followed with a single to keep the inning alive. Durbin then tried to time Molldrem’s move to the plate and took off for second. With his teammates behind him and paying attention, the infield yelled for him to step off and the Spirits were able to run down Durbin rather easily to get out of the inning.

Following a strikeout by German and a fly out by Lewis that appeared headed for the right centerfield gap, the Spirits then rallied for another 3 runs with two outs. Shawn Hunt was hit by a pitch and went on to swipe second base. Tipton then singled to move Hunt to third. Duran and McPherson each followed with back-to-back RBI singles to give the SPirits a 6 to 3 lead. A walk to Scott added another run before Lee went down swinging to end the inning.

WIth a 7 to 3 lead, Molldrem saw the first hitter reach on a single, but the Spirits defense was able to get Valle to ground out and then watched as Molldrem added the exclamation point on the victory with a pair of strikeouts to end the game.

“Great team win tonight,” Lee mentioned afterwards. “I mean, we’re likely not in this thing without the skills of Craig. I’m just going to be honest. Shout out to him for pitching a heck of a game.  If he’s not there to hold off the talent that team has at the plate, we probably get run-ruled. But hat’s off to our team for hitting when we needed to. This is something we struggled with during the summer. We’d have guys get on base and then do nothing. But tonight, these guys, all of them, came through when we needed them to. That’s fun baseball right there. Honestly, I’m flattered to get a win over a team that good. There’s no doubt they’ll be a handful all season long.”

The Spirits return to action next Wednesday night when they face off in a doubleheader against the Killer Bees. Game one is scheduled for 6:30PM and game two at 8:45PM. Both games take place at McInnish Park, Field #10 in Carrollton. 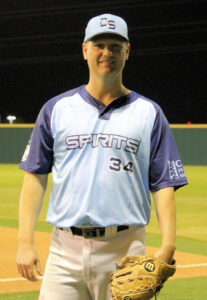