(March 28, 2022 – Dallas, TX) Offense once again proved to be quick and easy for Spirits (45+) hitters this past Monday night as the team served the Knights with 4 runs in the first and a 7-run third inning to cruise to an 11 to 2 victory in NTABL Masters League action at Reverchon Park in Uptown, Dallas. 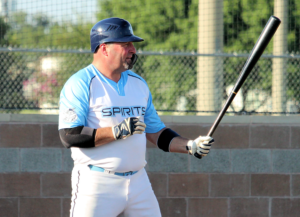 Kirk Sipila’s 2-run homerun in the first inning sparked a 4-run first for the Spirits, and ignited a 7-run third inning as the Spirits cruised to an 11 to 2 win over the Knights.

Kirk Sipila led all hitters, finishing with a pair of hits alongside 3 runs batted in. Two of those runs came in the form of a 2-run homerun in the first inning that seemed to ignite the bench, and the team never looked back. Eric McPherson, Shawn Lee, and Sean House also finished with 2 hits apiece, with Lee adding a pair of runs scored an a walk. Chris Allen and Mike Sopocy each finished the night with a pair of runs batted in, with Sopocy adding a double. House also finished with a double to policy off the box score, as did Will Nash and Earl German.

McPherson continued is solid role as a lead off hitter, starting the game off with a walk to put a runner aboard for the ghouls. Two pitches later, it was 2 to 0, Spirits thanks to a big bat from Sipila that saw a towering fly ball easily cover the left field wall for a homerun. Travis Hitzeman drew a walk and Nash forced him out at second after he reached on a fielder’s choice. Lee kept the inning alive with a bloop single to left field and a follow up double by Sopocy scored both runners to make it 4 to 0. Brian Hackney drew a walk to keep the inning alive, but House flew out and Chris Lewis grounded out to end the inning.

Despite a pair of singles in the bottom half of the inning, German, the Spirits starting pitcher held Knights hitters at bay, often lulling them to sleep with an offspeed pitch or a curve that appeared to be on a string. German and his defense held the Knights scoreless until the fourth inning.

As for the Spirits offense, after being blanked in the second, they opened up the floodgates in the third. Nash led the inning off with a double and Lee picked up another bloop single to put two on with nobody out. Sopocy reached on an error by the Knights third baseman that allowed Nash to score and after Hackney reached on a fielder’s choice that squeezed Sopocy at second, Lee was able to score to make it 6 to 0. Hackney advanced on a passed ball, and House later scored him on an RBI double. Lewis singled to move House to third and after Lewis swiped second, both runners scored on a single from Allen. German followed by crushing one to the right centerfield gap to score Allen and later moved to third on an single by McPherson. Sipila forced McPherson out at second after he reached on a fielder’s choice, but he was able to bat in German to make it 11 to 0, Spirits.

A couple of doubles between a pair of German strikeouts allowed the Knights to muster a pair of runs in the fourth and that eventually ended up as the game’s final score before the game was called due to the league’s two-hour time constraints.

“Great day for offense once again,” Lee commented following his team’s victory. “Sipila’s bat has been awesome so far this season. In fact, most of the guys’ bats have been awesome. Certainly won’t complain about batting so far this season. 13 hits in five innings of work is a good day at the office. German looked great on the hill tonight and I feel like each of our teams are beginning to gel. Looking forward to see what we can do with these rosters.”

The Spirits (45+) squad gets back to work in two weeks following a bye on April 4th. The team heads back to action on April 11 with a 6:30PM first pitch against the Reds at McInnish Park, Field #10 in Carrollton. Click here for schedule details and be sure to download the iScore Central app to listen to games live online.