(April 23, 2017 – Plano, TX) The first match-up of two upstart teams within the NTABL Open American League was far from the thriller the Spirits (18+) squad had expected this past Sunday afternoon. Both teams have been cruising through their inaugural seasons without much resistance and an equal pairing seemed to be in order as the two teams faced off on Graham Field at Prestonwood Christian Academy in Plano.

The Renegades started quickly by adding four runs in the top half of the first inning by using a combination of well-placed singles alongside several miscues by the Spirits pitching arsenal, which proved to be less than advantageous circumstances for our boys in blue. After the Spirits were held scoreless in the first inning, the Renegades returned to bat in the top half the second. In what would turnout to be the only 1-2-3 inning of the day, Renegades hitters Drew Dennis and Sean Kilday found themselves under sniper fire after both hitters were gunned down on two outstanding plays by Spirits shortstop, Justin Anderson. Each ground ball hit found Anderson ranging far from his normal position and each ball was fielded and followed up by strong and accurate, off-balance throws to nip each runner by a step.

This seemed to spark some momentum as the Spirits offense was able to find some life in the bottom half of the inning. First baseman, Collin Stacha drew a 4-pitch walk and later reached second and then third on wild pitches. Third baseman, John Showalter followed up with a strikeout and with one on and one out, infielder JP Seider was able to draw a walk as well. Seider successfully stole second and then advanced to third pushing Statcha home following a wild throw to second from the Renegades catcher attempting to pick off Seider. Pitcher, Thomas Stoltz then drove home Seider on a ground out to third as Seider was able to dive under the tag at home after a strong relay from first.

“I love the aggressiveness JP showed on that play. He showed some great instincts on the bases and we felt that momentum was in our favor at that point in the contest,” commented team manager, John Showalter. Designated hitter, Steven Baker would go on to ground out to third to end the Spirits threat, but leaving the team within striking distance down 4 to 2.

Sadly, the momentum was only temporary as that would be all the scoring the Spirits offense could muster until the bottom of the seventh inning. Spirits pitching struggled with control issues combining for 8 free passes to first, while giving up 14 runs on 14 hits. The team’s final gas came with one out in the bottom half of the seventh inning when center fielder, Eric Goetz reached on a single. Mike Werner moved Goetz to second with a ground out and that brought up Stacha with two outs. Down 13 to 2 at this point, the Spirits needed to score 2 runs in order to extend the game or the game would be called due to the mercy rule. On what would be his biggest hit of the year, Stacha barreled up a 0-1 fastball and sent it streaking over the left-center field wall. The shot narrowed the margin to 13 to 4 and the Spirits lived to fight for another inning. Showalter then followed with a single, however the Spirits were held at bay as Seider grounded out to end the inning.

In the top of the eighth, the Renegades managed to force in another run in what would be an eventual final score of 14 to 4. Showalter closed his post-game comments noting, “This was not how we had expected things to turn out this afternoon. You gotta tip your cap the Renegades. They played better than us and that’s about all there is to say, really. We’ll learn from this and we look forward to facing them again later this season.”

The path doesn’t get much easier for the Spirits as they head into Tuesday’s game against the 2016 champion, Tube Sox. Join the squad at Carpenter Park, Field #7 for a 7:30PM first pitch. 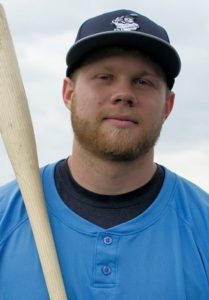