(November 5, 2017 – Plano, TX) For the second time in 2017, club and team manager, Shawn Lee was able to celebrate a championship as he and his Dallas Spirits (Brazos) squad won the NTABL Fall Baseball Brazos Division Championship Sunday afternoon by defeating the Knights by a score of 5 to 1 at Graham Field.

Jason Bottenfield was the focal point once again as he proved to be a Knights-killer, holding the squad to just 3 hits while striking out 8 en route to a complete-game victory. The Knights gather 7 hits against the hard-throwing right hander in the previous match-up back on October 11, where Bottenfield allowed just 2 earned runs, while striking out 12.

“Jason was awesome today,” mentioned Lee following his team’s victory. “The defense was solid behind him and he found the right combination of pitches today to keep them at bay. The Knights are a solid team with some of the league’s best hitters and we’re thankful that Jason had both the confidence and precision today to keep this one from becoming a race like our first match-up this season.”

In the Fall season’s first game, the Spirits edged the Knights by a margin of 9 to 8 in a game that featured 12 hits from each squad and scoring in every inning, less the fourth. In Sunday’s championship, both teams battled temperatures above 90 degrees in November, which no doubt may have been higher on the turf. Bottenfield set down Brad Leveridge with a strikeout to begin the game, but Paul Garcia, Jr. reached on a Spirits fielding error to give the Knights a runner on with one out. Bottenfield was able to get Josh Kallail to follow up with a fly out and Scott McCain grounded out to end the Knights half of the inning. The Spirits started off well as Lee drew a base-on-balls against newcomer, Hunter Thomas. The 6′-7″ left-hander delivered with a fast ball strike down the middle to start the count, but followed with 4 straight balls to give the Spirits a lead off runner. Bottenfield also drew a walk and both runners advanced on a wild pitch from Thomas and the Spirits appeared poised for a quick start. Thomas rebounded a bit however, and was able to get Kirk Sipila to pop-up to the infield and then struck out Travis Hitzeman and was able to get Patrick Bilgere to fly out.

Roger Battani started off the second with a single for the Knights and Bottenfield made it one on with one out after he struck out Joshua Leveridge. Battani was forced at second on a nice play from Spirits third baseman, Brant Finchum, who relayed to Hitzeman at second base, but the Spirits were unable to make the turn and Thomas was safe on the fielder’s choice. Thomas later stole second, but Bottenfield struck out Stacey Scott to end the Knights second. The Spirits offense found a way to score in the bottom half of the inning after David Tipton drew a lead off walk and then advanced on another wild pitch from Smith. Finchum also drew a walk and the Spirits again had two on with nobody out. Chris Lewis followed with yet another free pass and the Knights had seen enough from Smith as the call was made to Scott to find a way out of the bases loaded dilemma. Brian Hackney was the first to face Scott and he followed through by reaching on a fielder’s choice. Tipton scored to deliver an RBI to Hackney, but Finchum also scored on the turn in the infield that was fumbled by the Knights first baseman. Lewis was forced out at second, but in an attempt to turn two, the Knights first baseman mishandled the throw, which provided Finchum enough time to scamper home and give the Spirits a 2 to 0 lead. Jack Nash traded placed with Hackney by reaching on a fielder’s choice, which squeezed Hackney at second, and despite a base-on-balls to John Showalter, Lee followed by flying out to third to end the inning.

Bottenfield only needed 5 pitches to set the Knights down in order in the top half of the third and the Spirits once again rallied for a pair of runs in the bottom half of the inning. Bottenfield flew out to start the offensive half of the inning for the ghosts, but Sipila drew a walk and then advanced to third after Hitzeman sent the first pitch he saw into orbit, but foul. Hitzeman followed with a double off the left-center field wall to put runners on second and third with one out and Bilgere delivered by hitting a soft grounder to the right side that was good enough to score Sipila on the 4-3 putout. Tipton followed with a single to score Hitzeman and the Spirits led, 4 to 0 after 3 complete.

The Knights cracked the scoreboard in the fourth inning after Brad Leveridge was the victim to another Bottenfield strike out to start the inning, however Garcia, Jr. followed with a double off of the left field wall to give the Knights a runner in scoring position. A wild pitch that got past Bilgere at the plate moved Garcia, Jr. to third, and he later scored on a sacrifice fly by Kallail. The Spirits put a runner aboard in the bottom half of the inning but weren’t able to plate a run nor did the Knights in the fifth, despite a two out walk to Thomas, who got as far as second base following a passed ball. The Spirits went on to make it 5 to 1 in the bottom half of the fifth after Lee beat out an infield single and then later stole second. Lee advanced to third when Sipila grounded out up the middle and another double by Hitzeman plated Lee to give the Spirits a 4 run lead and eventually what would be the game’s final score.

Bottenfield struck out the side in the sixth and appeared poised to shut down the city of Plano with the control he was displaying with his pitches. Finchum added a single in the sixth that went nowhere for the ghosts and in the game’s final inning, both Brad Leveridge and Garcia, Jr. grounded out to put the Spirits within one out of their second championship in 2017. Kallail broke up the early celebration with a single up the middle, but Bottenfield re-gathered and struck out McCain to give the Spirits the win.

“I really enjoyed the opportunity to pitch today and had fun doing so,” commented Bottenfield following the victory. “The defense made it easy by playing the way the did. A great win for all of us!” 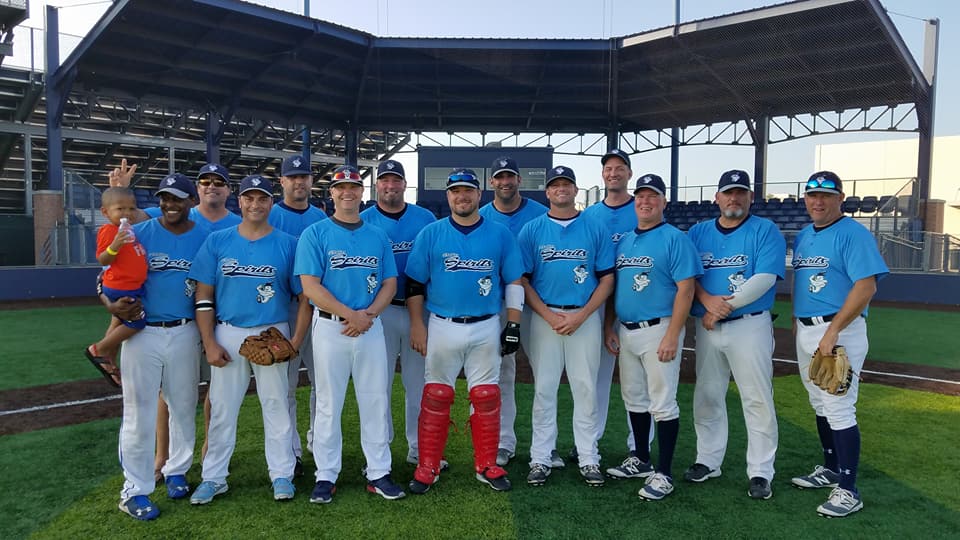 “Defense certainly was on point today,” continued Lee. “When you have a guy like Jason, or Sip (Sipila), or (John) Holmquist, you can expect solid pitching. We always discuss how we need to be solid on defense and today showed we were. Finchum played great at third for us today with a number of put-outs, and the rest of the guys were as solid as they come. It’s been an epic season for Spirits baseball and I’m really proud and flattered to play around such as great group. We’ll really enjoy this as well as the summer victory and look to bring back that great combination of chemistry and solid ball players when we get ready to take the field in 2018.”

The Spirits await the destiny of their NTABL Trinity Division squad, who defeated the Pirates by a score of 4 to 0 in the evening game. The Spirits (Trinity) will host the Oak Cliff Pelicans on Tuesday night with an 8:45PM first pitch. The game will be held at Graham Field on the grounds of Prestonwood Christian Academy in Plano, and you can click here to view schedule details or to watch the game live, online.