(June 5, 2017 – Dallas, TX) Thursday night’s NTABL Masters League contest between the visiting Dallas Bulls and the Spirits (45+) squad looked like more of a low-scoring football game than a five inning baseball game. The ghosts unleashed for 15 runs on 10 hits as they dismantled the Bulls by a score of 15 to 1. Bulls pitcher, Jim Crombie struggled with his command during the humidity-ridden session and the results typically led to a free pass to first base or a Spirits hit.

Brant Finchum returned and was welcomed back to the mound after a short hiatus with a hamstring injury. The veteran pitcher, infielder, and utility man that also spends a lot of time at catcher appeared spot-on with his pitches. He was able to set the Bulls down, 1-2-3 in the first inning despite a single by Jeff Jones. Paul Adams followed with a ground ball to second in which the Spirits defense managed the 4-6-3 double-play to get out of the inning. In the Spirits offensive half of the inning, the team batted around and managed to put up 6 runs to jump out to a very early and dominant lead. David Tipton drew a base on balls to start things off and left fielder, Shawn Lee followed with a single to left. Tipton moved to third after previously advancing to second on a wild pitch, and later scored when Guy Koenig hit a sacrifice fly to left field, which also allowed Lee to advance to third. Kirk Sipila reached on an error to score Lee and the Spirits were quickly up, 2 to 0. Chris Lewis followed with a base on balls and Brian Hackney then followed by reaching on an error, which scored Sipila. Patrick Bilgere then hit a fly ball deep enough to left to score Lewis, who had made it to third on the previous error and the scoring continued. Finchum then connected on a 3-2 pitch to send a hard liner to center field for a single to put runners on the corners. Finchum promptly stole second base and then reached third after Mark Leemaster singled to score Hackney. Finchum was able to score after Tipton returned for his second at-bat of the inning when the Bulls catcher was unable to handle a pitch. Crombie was able to fan Tipton to end the inning, however the Spirits had a 6 to 0 lead after an inning complete.

The Bulls chipped at the lead in the top half of the second inning after Jeff Lambert and Crombie both singled. John Crossley reached on a fielder’s choice after Sipila pinched Crombie at second, and with runners at the corners and one out, Lance Metcalf singled to score Lambert. Jeff Vanderpool also reached on a fielder’s choice, but the Spirits were able to shut down the rally after Michael Nurenburg lined out to Lee in left field.

Both teams went down quietly after a few scattered runners were able to reach in the bottom half of the second and top of the third before the Spirits offense clicked again during the bottom half of the third. Bilgere and Finchum both drew walks and Leemaster picked up his second single of the game to load the bases for Jack Nash. Nash popped out to the infield, and with one out, Tipton drew another free pass to score Bilgere. Lee went down on strikes and the Bulls appeared they’d get out of the inning, however Crombie had trouble getting the ball over the plate to get the inning’s final out recorded. After two straight wild pitches, both Finchum and Leemaster were able to score. Koenig then reached on an error to score Tipton, and after the Bulls made a few undesirable throws within the infield, Koenig was able to reach third. Sipila followed with a single to score Koenig and the Spirits led 11 to 1 after the Bulls were able to get Hackney to ground out.

The Spirits went on to pick up another 4 runs in the bottom of the fourth inning after Bilgere, Finchum, and Leemaster all drew walks and Nash singled to score Bilgere. Tipton and Lee both flew out and with two outs, Koenig singled to score Finchum, and both Leemaster and Nash scored when Sipila singled to left. The Spirits shut down the Bulls in the top half of the fifth inning and the Bulls threw in the towel at that point to end the game early. Three Spirits hitters were good for two hits on the day, including Lee, Sipila, and Leemaster. Sipila finished the day with 4 runs batted in.

“It was great to have Finchum back on the hill for us tonight,” commented Sipila after the game. “His command was solid and he did his job by getting the Bulls to put the ball in play so we could play defense. He only needed four innings tonight and he didn’t give up any walks. Sold come back for him. And great production from the lineup tonight. When you hit, when you score runs, you’re setting up an opportunity to win and you make life easy on your pitcher. We have a big game next week versus the Orioles and we’ve been rolling since our 9-2 loss to them on May 1st. We’ll need our best effort against them Monday night at Pearce.”

The Spirits return to action once again next Monday night as they host the Dallas Orioles with the season series tied at 1-1. First pitch is slated for 7:00PM and the game is scheduled at JJ Pearce High School in Richardson, TX. 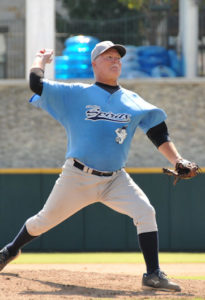