(March 27, 2019 – Euless, TX) Things seem to fall apart quickly for the Dallas Spirits (40+) squad and before the game even started as the team expected 12 players and it quickly dropped to 9 as several players were unable to make the game as the squad hosted the first place Astros. Fortunately after the first inning, the roster grew back to 10, but the Spirits offense didn’t appear to show up at all and it cost them on Arlington Field at the Texas Star Complex in DFW ABA league play on Wednesday night.

The Astros jumped out to a quick 3 to 0 lead off of Spirits starter, Stacy Scott after Scott struck out lead-off hitter, Marcos Vidall III. Dan Zier doubled to left-center and later scored on a two-out single by Daron Wilkinson. Wilkinson moved over after Joseph Crites singled and the bases loaded after James Bolton drew a walk after what would prove to be a tight zone for the Spirits on the evening. A 2-RBI single by Scott Crumley made it 3 to 0, Astros before Scott was able to get Randall Land to ground out.

Scott then led off the Spirits half of the inning with a single, but Astros starter, Cristopher Brooks seemed to have an advantage against Spirits hitters as the ABA home plate umpire seemed impressed to see a curve ball and approved of the pitch by awarding a high number of questionable strikes. Brooks undoubtedly kept the hitters off balance with a change in speeds and the result was little to no offense for the ghosts. John Hefner flew out on a 3-0 count and Kirk Sipila grounded out to follow. Patrick Bilgere kept it interesting by drawing a walk to put two on with two out, but Shawn Lee popped out to the pitcher to kill the inning.

The Astros went in order in the second as did the Spirits, despite ball-magnet, Chris Lewis wearing a Brooks pitch. Brooks was able to strikeout the rest of the side and after two, the Astros remained up, 3 to 0.

The game remained a sleeper, with the silence of the late night falling alongside a hard Texas wind blowing straight in from center. The field was eerily quiet and it seemed to sum up the Spirits offensive effort up to that point. After picking up another run in the fifth, the Astros led 4 to 0 heading into the bottom of the sixth. The Astros turned to hard-throwing, Joseph Crites to close the game, but the Spirits seemed to be awakened by the big arm. Hefner reached on an error by the Astros first baseman and Sipila followed with a single to put two on with nobody out. Bilgere singled up the middle to load the bases and Lee followed by stroking the first pitch he saw to left field to make it 3 singles in a row and to get the Spirits on the board. Brian Hackney struck out and Lewis reached on a fielder’s choice that was good enough to score Sipila, but squeezed Lee at second. Lewis quickly stole second base and the Spirits had 2 runners in scoring position, but Crites was able to get Jack Nash on strikes and the rally was over.

Down 4 to 2 and feeling a hair of momentum, the squad took to the field for defense in hopes of making things interesting in the game’s final inning. Unfortunately for the Spirits, offensive hell broke loose and the Astros broke the game open with a 6-run inning that included a double, 5 singles and 2 Spirits fielding errors. With a 10 to 2 lead, the Spirits were able to muster a pair of runs in the final half of the inning after David Tipton singled and Brant Finchum walked. Both runners advanced on a wild pitch and Tipton later scored on an RBI single by Scott. Finchum scored later on a fielder’s choice by Sipila, but Randall Land was able to close out the Spirits after getting Bilgere to pop-up.

“Not much to say about this one,” commented club manager, Shawn Lee. “We were flat tonight. That’s it. And the Astros can hit. We need to take that team extremely serious. I’m a little concerned about our ability to give up such big innings. That cost in in the Vegas tournament and it’s not a good habit. Hoping we still come together soon. Our 35+ league starts next week and we’re going to see some solid competition there as well. We need to get back to our winning ways. Ton of faith, though. Our guys can play. We just haven’t all played at the same time yet this season. Whether is finally starting to coperate and we’re learning the ability of the plate umps in the new league, so we’ll adjust accordingly. It’s overwhelmingly one-sided right now. Not sure if it’s because we’re the new kid, but we’ll beat all 11 of them if we have to.”

The loss drops the Spirits to 2-2 in league play. They return to action next Wednesday night as they visit the Fighting Chihauhuas at Oak Grove Park in Grapevine at 9:00PM. Click here for schedule details. 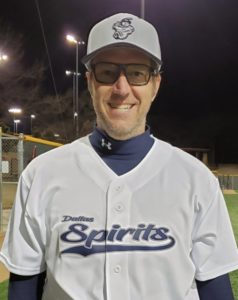