(July 1, 2019 – Plano, TX) Offense was in full swing, pun intended as the Dallas Spirits (35+) baseball team got after the Dodgers Monday night at Graham Field on the grounds of Prestonwood Christian Academy. The squad spread 15 hits, but yet again left 12 runners on base as they were still able to cruise to a 7 to 3 victory in NTABL Veterans League action.

Eric Goetz led the box with a fantastic 4-for-4 finish as several others finished the night with multiple hits on the evening. Pitchers Brant Finchum and Kirk Sipila combined to allow just 7 hits on the night defensively.

The Spirits broke open the scoring in the second inning after Goetz led things off with a single and Shawn Lee followed with another single. Both runners advanced after David Tipton reached on an error by the Dodgers and Goetz was squeezed at the plate a moment later after Finchum reached on a fielder’s choice. Jonathan Duran then reached on another Dodgers fielding error that allowed both Lee and Tipton to score and the Spirits led the game, 2 to 0. Grant Martin kept things moving with an RBI single to score Finchum and Duran later scored when Cliff Brade reached on the third Dodgers fielding error of the inning.

Leading 4 to 0, the Spirits tacked on a fifth run in the fourth inning after Finchum reached on a one-out single. Duran went down on swings for out number two, but Martin and Brade went back-to-back on singles and Finchum as able to score to make it 5 to 0, ghosts.

The Dodgers bounced back in the bottom half of the fourth however, after Joe Venker and Brade Kempson started the inning off with singles. The Spirits then turned a double-play to retire Wes Kirby, but Venker was able to score after Patrick Richer followed with an two-out RBI single to cut the lead town to, 5 to 1. The next Dodgers hitter went for a triple to score Richer and a single by Anthony Cass cut the Spirits lead to, 5 to 3.

The Spirits rallied for another pair of runs in the seventh inning after Brade drew a one-out walk and stole second. Eric McPherson dropped a perfect bunt down the third base line for a hit to push Brade to third and Brade was then able to score on error by the Dodgers pitcher during a pick-off attempt of McPherson at first. Sipila then singled and Travis Hitzeman followed with a single to load the bases. Patrick Bilgere went down on swings, but Goetz kept things alive with an RBI single to give the Spirits some needed insurance.

Sipila was able to retire the Dodgers in order to record the save and to seal the victory for the Spirits in the bottom half of the seventh. The win improves the squad’s record to 3-5-1 on the season and at the midway point, the team sits in 5th place. The Spirits return to action next Thursday night against these same Dodgers as they host the Dodgers at McInnish Park, Field #11 at 9:00PM. Click here for schedule details. 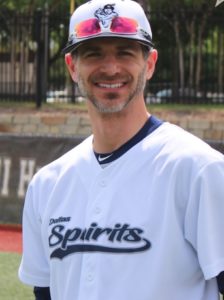 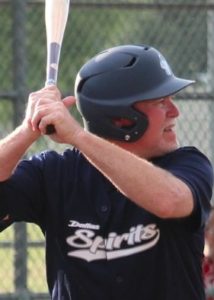