(November 3, 2020 – Euless, TX) Game two proved to be a different story for the Spirits (40+) squad as they rallied to tie the best-of-three series against the Drillers on Legends Field at Texas Star. The team used a 10-hit attack and a huge first inning to cruise to a 7 to 3 victory in DFW-ABA League playoff action after they dropped game one of the series, 8 to 7. 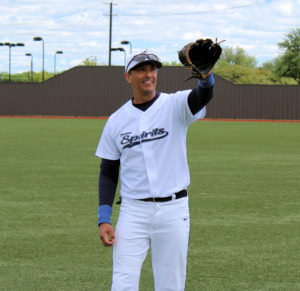 Duane Aponte pitched a complete-game win, allowing just 2 earned runs on 8 hits while striking out 3 to lead the Spirits to a 7 to 3 win in DFW-ABA playoff action.

David Tipton, Kirk Sipila and John Hefner led the Spirits offense, each finishing with a pair of hits including doubles from both Tipton and Hefner. Brant Finchum and Bobby Kornhauser also contributed doubles during the game, lifting the Spirits with 4 extra base hits after recording none in the first game. Pitcher, Duane Aponte went the distance and picked up the complete-game victory allowing just 2 earned runs off of 8 hits while walking 4 and striking out 3.

The Drillers drew first blood, picking up where they had left off during game one but with a bit of a slow start. Aponte struck out Michael Tedder to record the game’s first out and Scott Swingle flew out in what appeared might be an easy inning for Aponte and his defense. But Aponte lost the third hitter, Mike Ellis to a walk and the next Drillers hitter followed with a single. Aponte then walked Jeff Peck to load the bases and it cost the Spirits as Chris Allen followed with a single to score two runs before Peck was caught stealing to end the inning.

After the small amount of smoke cleared, the Spirits dug in for offense and built their own fire after Tipton led the inning off with a single. Tipton swiped second base and Eric McPherson replaced him at first after drawing a walk. Kirk Sipila followed with an RBI single to score Tipton and Shawn Lee followed with an RBI single to score McPherson. Dan Sosa then grounded out, but both Sipila and Lee were able to advance to scoring position. Bobby Kornhauser then reached on a fielder’s choice that allowed Sipila to score safely and after Stacy Scott grounded out, Lee was able to score and Korhauser moved to second. Finchum kept the inning alive with an RBI double that scored Kornhauser and after Hefner reached safely on a Drillers fielding error, Tipton flew out to end the inning but the Spirits held a 5 to 2 advantage.

Despite a lead off walk to Justice, Aponte went on to strike out Nelson Alvarez and watched Justice get gunned down at second base on a steal attempt. The attempt cost Justice his right ankle as he rolled it during the slide and was forced to leave the game with an injury. Aponte then refocused and struck out Augie Guzman to kill the Drillers second inning. McPherson and Sipila both drew walks to start the Spirits second inning, but Lee grounded to short and Sipila was cut down at second and Lee was called out at first after a horrible call by the field up who spent most of the game staring at his cell phone. McPherson was able to advance to third, but Sosa grounded out to end the inning.

Mark Lamkin started the Drillers third inning with a single, but Aponte was able to get the next three Drillers hitters in order to keep the offense cooled. The Spirits then rallied for another run in the bottom of the inning after Kornhauser doubled and later moved to third after Scott singled. Finchum lined out to hold the runners but Hefner played hero with an RBI single to score Kornhauser. Scott was tagged out on the play to create the second out and after Hefner swiped second, Tipton flew out and the inning was over with the Spirits up, 6 to 2.

Despite a pair of singles to start the Drillers fourth, Aponte again regained focus and was able to get the next three hitters in order. The Spirits went in order during their half of the inning when McPherson flew out and Sipila followed up with his second hit of the game. Lee ended the inning with a 6-4-3 ground out the unfolded into a double-play and the game’s score remained the same. The Drillers then found a few fumes in the offensive tank after Guzman drew a walk to start off the fifth inning. Lamkin flew out but Tedder kept things rolling with a single and both runners were able to advance on an error by the Spirits infield. Guzman eventually scored on an error by the Spirits catch to cut the lead to 6 to 3 before Swingle flew out and Ellis grounded out to end the inning.

Alvarez gave the Drillers some light in the top half of the seventh, but the Spirits defense put out that light quickly after Guzman lined out to Sipila at second base and Sipila was able to double-up Alvarez, who was off of the bag. Aponte was then able to get Lamkin to ground out to seal the victory.

“Great effort in game two,” Lee commented. “Glad we put the tough loss behind us and got things going right away. That first inning was huge and it was great to see the guys restart the engine and get after it offensively. Aponte pitched a hell of a game for us and for the most part our defense played well. Our defense has definitely tightened up compared to some of our regular season play. Great to see some extra base knocks as well. Solid game for Hefner and we can always count on Sipila’s bat. We look forward to the challenge of advancing to the next round.”

The team will return to action immediately as they’ll face the Drillers in an elimination game starting at 6:30PM on Arlington Field at Texas Star Wednesday night. The winner moves on to round two of the DFW-ABA League playoffs.