(November 4, 2020 – Euless, TX) Spirits (40+) bats were on fire Wednesday night and the ghosts used a 6-run first inning and a 4-run second inning to run past the Drillers in a best-of-three game series in DFW-ABA League playoff action. The Spirits cruised to a 13 to 3 victory to win the series, 2-1 and advanced to round two of the playoffs to face the #2 seeded Rattlers.

Kirk Sipila, Shawn Lee, Bobby Kornhauser and Brant Finchum each led the Spirits offense with a pair of hits. Lee and Finchum added a pair of RBIs on the night and Kornhauser added 3 RBIs to help carry the Spirits.

It was a busy top of the first inning as David Tipton and Eric McPherson both led the game off with back-to-back walks. Sipila was then able to reach on a fielder’s choice that squeezed Tipton at third, but Lee kept the inning moving with a single to load the bases. Dan Sosa was also walked to pick up the easy RBI and the Spirits had a 1 to 0 lead. Kornhauser followed with a single to score both Sipila and Lee and after Stacy Scott drew a walk, Finchum singled to score Sosa. Chris Lewis also drew a free trip to first base to score Kornhauser and John Hefner flew out to the infield to hold the runners. Scott was then able to score after Drillers catcher, Art Vargas tried to pick off Lewis at first base allowing for Scott to cross the dish as the ball got past the Drillers first baseman and went into the outfield. Lewis then stole second but Drillers starting pitcher Chris Allen was able to get Tipton to go down swinging after facing him for the second time and to stop the bleeding.

To add insult to injury, the Drillers went in order in the bottom half of the first as Spirits starter, John Holmquist made quick work of them including a strike out during the 1-2-3 escapade. The Spirits offense wasn’t finished and it picked up right where it had left off in the first inning. McPherson singled and moved to third after Sipila followed with another single. Lee singled to left to score McPherson and another free pass to first allowed Sosa to load the bases. The Drillers had seen enough of Allen and turned to Kevin Hurd in hopes to slow down the Spirits offense. Kornhauser welcomed Hurd to the game by drawing an RBI walk to score Sipila but the Drillers were able to retire Scott on a double-play ball that also put out Kornhauser at second. Lee was able to score on the play and Finchum kept the scoreboard abuse rolling with an RBI single to score Sosa before Lewis grounded out to end the inning. The damage was done however, as the Spirits held a 10 to 0 advantage heading into the bottom half of the second.

The Drillers were then able to rally for a pair of runs after Vargas singled to lead things off and then scored on a double by Nelson Alvarez. Allen reached on a fielder’s choice that cut down Alvarez at third and he would eventually score on an error by Finchum at third. With bases loaded and things looking a little serious, Holmquist rebounded by striking out the next Drillers hitter to kill the rally.

The Spirits added another run in the third after Hefner wore a pitch and was replaced at first after Tipton reached on a fielder’s cohice that squeezed Hefner at second. Tipton then stole second base and McPherson drew a walk to replace the first base vacancy. Sipila followed with a single to load them up and Lee hit a sacrifice fly ball to left field that allowed Tipton to score and give the Spirits an 11 to 2 advantage before Sosa lined out to end the inning.

Holmquist remained solid in the third but gave after giving up a pair of singles and then recording the second out of the inning, he turned the ball over to Kornhauser who felt he had some work left in him after his previous day’s struggle. Kornhauser was able to quickly get out of the jam after Scott Swingle grounded out and the Spirits held their 11 to 2 lead.

The team then bounced back for another pair of runs in the fourth after Kornhauser led the inning off by wearing one of Hurd’s pitches to his elbow. He was then forced out at second after Scott reached on a fielder’s choice and Scott later moved to second after Finchum reached on an error. Lewis then singled to load the bags and Hefner followed by drawing an RBI walk to move the Spirits lead to 12 to 2. Tipton followed with an RBI single to score Finchum but McPherson lined out and Sipila grounded out to end the inning with the Spirits up, 13 to 2.

Kornhauser made fairly quick work of the Drillers in the bottom half of the fourth after he walked Augie Guzman. Mark Lamkin reached on a fielder’s choice that put Guzman out at second and after Lamkin swiped second base and then moved to third on a ground out by Michael Tedder, Kornhauser regained composure and retired the next Drillers hitter via a fly ball.

The Spirits were quiet in the fifth inning and returned to defense to end the game and to win the series with the league’s two-hour game time limit coming into effect. The Drillers were able to add another run after Mike Ellis drew a walk and Vargas singled. Kornhauser then walked Alvarez and a small concern began to build as Kornhauser then walked Allen to give the Drillers a free run. After a brief meeting at the mound from Sipila, Kornhauser seemed to dial in as he struck out the next two Drillers hitters and was able to get Lamkin to ground out to end the game and to life the Spirits to the next round of the playoffs. 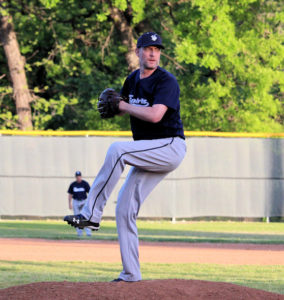 Pitcher, John Holmquist returned to action and looked good in 2 2/3 innings holding the Drillers to just an earned run off of 5 hits, while walking none and striking out 3.

“Another great effort from the guys tonight,” manager, Kirk Sipila commented after the series win. “It was great to have our big man back (John Holmquist) and though his efforts were short, they were very important. He gave up just one earned run, walked nobody and struck out 3 in two and two thirds innings of work. That’s great stuff. Kornhauser was bringing it pretty good himself. He had some strike zone issues, but he never lost control. He has some extra stuff too, at least 5 or 10 mph more than yesterday and it showed. It kept their hitters a little off balance. Offensively, he was a machine tonight. Great job by the offense tonight. You take out their two ringers, and that’s a 1-hit night for our pitchers. We look forward to the next round.”

The Spirits advance to the second round of the playoffs where they’ll face the Rattlers in a best-of-three series starting with game one next Tuesday night starting at 8:45PM at Texas Star on Legends field. Click here schedule details. Game two will be on Wednesday night at 6:30PM and should the series split, the teams will face off in a doubleheader elimination game following game two starting at 8:45PM. 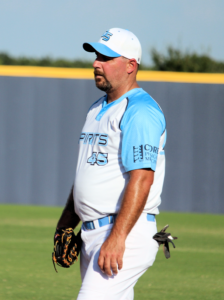 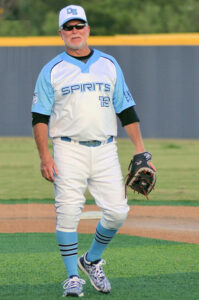