(July 2, 2020 – Carrollton, TX) It was the Spirits (35+) squad that started the game quickly, but what appeared to get fired up fast also fizzled and died as quick as it started. On a night where the team’s defense committed nearly as many fielding errors as it did adding hits to the box score, this one was over quickly.

The Spirits fell to 1-1-1 in NTABL Veterans League action Thursday night after the Thunderbirds offense opened up a school on hitting following a quick 2 to 0 start from the Spirits. Cliff Brade led off the game with a single and advanced to second after Eric McPherson also teed off of Thunderbirds starting pitcher, Brent Smerczynski. A follow up double by Kirk Sipila made it 1 to 0, Spirits and two pitches later, Shawn Lee slapped a single to right field to make it 2 to 0. Smerczynski seemed a little frustrated at first but quickly regained his composure to get the next three Spirits hitter in order to stop the early bleeding.

The Thunderbirds then followed up with 3 runs of their own to take a 3 to 2 lead after Brian Synatzke singled and advanced to second after Brade mishandled the play and the ball in left field. Smerczynski flew out as did John Menth and it appeared the Spirits were in business, however a two-out single (keywords, two-outs as that phrase will play a huge role later in the story) by Brad Bode put the birds on the board as Synatzke was able to score. Rob Carroll then doubled to score Bode and Donald Massound followed with an RBI single to make it 3 to 2, Thunderbirds before Bo Vaculick flew out to end the inning.

The game then moved on quietly with the Thunderbirds peppering hits throughout the next 4 innings. Despite a few errors in the field, the Spirits and pitcher Jonathan Duran held course as the score remained 3 to 2 until the bottom half of the fifth inning. Ryan Karonka led off the inning with a double and Mike Trujillo flew out to leave one on and one out. A single by Synatzke put runners on the corners and after Synatzke easily took second on the Spirits, Smerczynski flew out and completed the sac fly to score Karonka to make it 4 to 2, Thunderbirds with two outs. That’s when all offensive hell broke loose for the birds. Menth doubled to score Synatzke and after Bode singled to score Menth, the Spirits turned to Sipila to relieve Duran on the bump.

The Thunderbirds proceeded to welcome Sipila by following up with 5 hits, including a pair of doubles, a hit-by-pitch and a Spirits fielding error all with two outs to complete putting up a 9-spot in an inning the Spirits typically refer to as a “Spirits inning.”

“Ah, yes, the old trusty ‘Spirits inning,’ commented Lee after the game. “We looked good at first. And honestly, not thrilled with the way we came out defensively but we had a decent start to the game offensively. As far as the inning adjective, you can count on us to completely (expletive) to bed every now and again and we joke about it all happening in the same frame. Credit the Thunderbirds offense though. They came to hit and it wasn’t a shocker. We knew they were good. I just don’t understand some of us coming out like we were planning for slow pitch softball. I thought our defense had a slow start. Bottom line is if you don’t come to play with these guys, perhaps you belong in an age group that better suits you. We won’t be taking home walnut and bronze if we think we’re going to get away playing at that level. That’s all I can say. On the bright side, McPherson and Sipila continue to punish the ball and it was nice to see (Shawn) Hunt get on the bags a few times. Solid night for those guys.”

With a commanding 12 to 2 lead, it was all over less the heads down walk to the car after the game. The Spirits scrambled to pick up a third run in the top half of the seventh inning after Shawn Hunt hit a one-out single for his second hit on the night. He advanced to second base after Grant Martin went down on swings and Brade reached on an Thunderbirds error. McPherson hit an RBI single to score Hunt, but Massoud, filling in as relief pitcher for the birds was able to get Sipila to fly out to end the game.

McPherson led the Spirits with a pair of hits including an RBI and a run scored while Hunt also finished the night with a pair of hits and a run scored. Sipila rounds off the box with a double, an RBI and a base-on-balls as the Spirits finished with 8 hits and 5 errors in the field. Menth and Massound led the Thuderbirds with 3 hits each as the team finished with 16 hits before the dust settled.

The squad will look to erase this one from memory as they return to action next Thursday night against the Knights. With some of the best hitting and pitching in the league, the hill remains steep to climb for the ghosts. First pitch is scheduled for 9:00PM at McInnish Park, Field #11. Click here for schedule details or to download the iScore Central app to listen to the Spirits games live online. 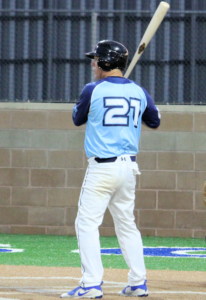