(July 21, 2016 – Dallas, TX) The Spirits (35+) baseball team suddenly appears to be playing the role of bully over the QHT Brewers. After a 14 to 4 demolition of the brew crew last week, the Spirits once again used an offensive attack to cruise to a 15 to 3 win Thursday night. The Spirits used 13 hits and 8 walks while 2016 All-Star pitcher Jonathan Duran held the Brewer bats quiet. Duran gave up 1 run on 3 hits in 4 innings of pitching, while Jason Bottenfield made his first appearance as a Spirits pitcher, closing out the final inning after giving up 1 hit and a pair of walks that led to the final 2 runs for the Brewers.

Third baseman John Show led the offensive attack by going 3 for 3 with a double, a walk, scoring 3 runs, and adding 3 RBI. “John looked great for us today. He’s been solid all season and anxiously awaiting a breakout game and today we saw it. He’s been a great defender when called upon but today, his stick was just silly. And great timing for it. He did it with runners on base in each occasion,” mentioned Spirits skipper Shawn Lee.

Not to be outdone, Spirits shortstop and 2016 All-Star Eric McPherson added 4 hits of his own going 4 for 4 with 2 runs scored and 2 RBI. “Eric has been at it all year. He’s a great athlete and a fantastic teammate. He’s solid from any spot you put him in and he’s one dangerous hitter. I think it’s pretty obvious when you make the All-Star team from both our 35+ and 45+ squads that you’re getting it done. He’s a great asset both on and off the field,” continued Lee.

Duran also continued his hot hitting by adding a pair of hits, an RBI, and 2 runs scored. All-Stars Cliff Brade and Jason Bottenfield each added a hit and a pair of runs scored. Jason Reyes and Tom Miller added singles, each adding a run scored and an RBI as well.

The team will break for the weekend to support their All-Stars playing in the NTABL Charity All-Star Event held at Dr. Pepper Ball Park this weekend. They return to action next Thursday night as they battle league-leader, Modoc for the top spot in the Veterans League Standings. Join the team at Jesuit College Preparatory in Dallas at 7:00PM for what will no doubt be a great game. 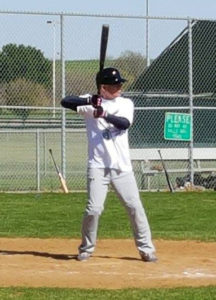 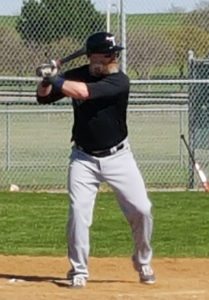