If you were watching or listening, you may have considered leaving or turning the channel because it started off ugly; very ugly for the ghosts. After a brilliant outing on Saturday, the Spirits once again leaned on Mike Sopocy to pitch. Sopocy had pitched a complete game win on Saturday for a different league and due to the fact that the team was once again short handed, they once again required his services and it did not start the way he nor any of his teammates expected.

The Rattlers blasted Sopocy in the first inning, starting with a single by Jimmy Campisie that turned into a 1 to 0 lead after a double by Marcos Vidal. Rich Beller walked and a double by Brian Kellner made it 2 to 0 after Vidal crossed the plate. An error by the Spirits infield allowed Beller to score and a follow up single by Marlon Woods pushed the lead to 4 to 0. Sopocy was able to cut down Mike Dossey on strikes, but then followed by hitting Alex Benitez with pitch. Steve Smith also went down swinging, but a single by Kevin Simmons scored Woods to make it 5 to 0 before Sopocy was able to get Daron Wilkinson to ground out.

For most, it may seem like the game would be over after a steam rolling like that to start things off, but crazy enough, the Spirits and Sopocy both got better as the game continued. One would have to think that a great hitting team like the Rattlers felt they were likely in control of their own destiny but as it would pan out, those 5 runs in the first inning would be the only runs the Rattlers would put together.

Eric McPherson led the bottom half of the first off with a single and a short moment later, he was squeezed at second after Chris Allen reached on a fielder’s choice. Allen stole second to give the Spirits a runner in scoring position and after Travis Hitzeman drew a walk, Sopocy went down on swings and it appeared the Spirits may not score. Both runners advanced on a double steal during the next pitch from Simmons, and the move paid off after Will Nash singled and Allen was able to score. Simmons rebounded and was able to get Sean House to fly out to stave off any additional scoring.

In the second, Sopocy dialed in and set the Rattlers in order. The Spirits went quietly in the second after a double play ball took away from a lead off walk by David Tipton and the score remained 5 to 1, Rattlers.

The Spirits and Sopocy stayed alive, holding off any scoring by the Rattlers and making attempts to resuscitate the offense. In the bottom half of the fourth, the offense began to chip away at the Rattlers lead. Nash led off the inning with his second hit of the game but was forced out at second after House reached on a fielder’s choice. Tipton singled to push House to third and a double by Shawn Hunt that one-hopped the wall and would have been certain to leave the park without the incoming wind was good to score House and cut the lead to 3 runs. Lester Bedford flew out but McPherson kept the inning alive with a single that scored Tipton before Allen grounded out to kill the rally.

Sopocy once again set the Rattlers in order during the fifth and the offense picked up where it had left off, this time tying the game with another pair of runs after Hitzeman reached on an error to lead off the Spirits half of the inning. Sopocy singled and Nash reached on a fielder’s choice that put him out and second and moved Hitzeman to third. Nash swiped second base, and an RBI single by House scored both runners to tie the game. The Rattlers turned to Benitez to replace Simmons on the mound  and both Tipton and Hunt welcomed him to the game with back-to-back singles. Benitez was able to get Bedford and McPherson to fly out before the Spirits could break the tie.

Sopocy set the Ratthers in order for the fourth time in the game to preserve the tie and the ghosts took to the dish in hopes of a good old fashioned walk-off. Allen drew a walk to lead things off and immediately, the Spirits were in business. Hizgteman singled and moved Allen to third, so the Rattlers chose to intentionally walk Sopocy to load the bases to create a force out opportunity. The move almost proved genius, as Nash was able to reach on a ground ball that squeezed Allen at the plate. Two pitches later, House was on safely and Hitzeman was out at home on another infield ground ball that allowed the Rattlers to get the force at home. Three pitches later however, the strategy proved futile as Benitez put one past his catcher and Allen, running for Sopocy at the time, was able to cross the dish for the wild pitch walk-off.

“We like to keep it interesting,” Shawn Lee mentioned after the game. “The guys will tell you that I’m usually the first to yell that the sky is falling when things don’t go our way. It’s not that I don’t believe we can’t win, but when you face a solid hitting team like the Rattlers, a 5 to 0 deficit in the first inning is like a 20 point lead in basketball. I know we can score, but we then are usually faced with an error or two, a bad call by an ump, a lucky hit…something. But tonight that didn’t happen. Give credit to Mike (Sopocy) for keeping his head and the guys scratching their way back. Mike has been fantastic in his last two outings and we’re grateful he was able to go tonight. We were short handed again, and had a few faces fill in for tonight. Great job by Shawn (Hunt) to say yes to filling in tonight. We needed his big hit to get over the hump. David (Tipton) played well tonight too, getting on base all three times. That was important. It wasn’t pretty, but we’ll always take a win.” 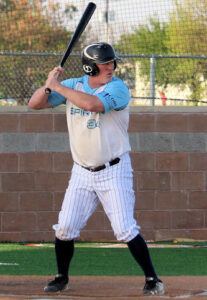 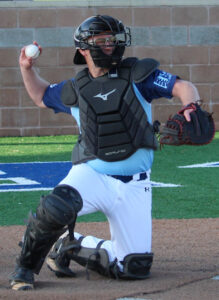