The teams squared off at a new location, Oran Good Field in Farmers Branch and the friendly rivalry is known for some close games and heartbreaks that go both ways. In the latest chapter of the matchup however, it was all Dallas Spirits. The Spirits upgraded their league totals to 34 to 5, having outscored their opponents by 9 runs each game this season.

Kirk Sipila once again outperformed all hitters, continuing to absolutely scorch the baseball. Sipila finished a perfect 4-for-4 with a double, and 2 runs scored and batted in. Chris Allen finished 1 of 3, walked once, scored 3 times, and added 3 runs batted in to assist Sipila in carrying the team offensively. Eric McPherson and Earl German also added to the cause, each recording a pair of hits on the night, with McPherson also adding a stolen bag. James Roberts, Steven Nutt, and Chris Duty led the Reds, each finishing with a pair of hits on the night.

The Spirits offense was unholy to Reds starter, Anthony Osburn. Even though Osburn finished with 4 strikeouts before the shortened game completed, the Spirits took advantage of him with a 14-hit attack that led to 12 runs scored, 9 of which showed as earned. Things got started for the ghosts in the first after both Allen and McPherson started the inning with outs. Sipila and Shawn Lee each singled, with Sipila moving to third on the hit by Lee. Lee moved to second on a wild pitch and after Mike Sopocy put up a good battle at the dish, he was rewarded with a single that scored both Sipila and Lee before Brian Hackney grounded out to end the Spirits half of the frame.

Despite a leadoff single by TK Hayes, followed by a stolen base and another single by Nutt, Spirits starter, John Holmquist held the reds in check after getting Jeffrey Smith to fly out and getting another out via the ground ball.

The Spirits offense then opened up the scoring in the second with another 5 runs. Will Nash doubled and newcomer, Lester Bedford drew a base-on-balls. German then singled to load the bases and one play later, Nash was able to score after Holmquist reached on a Reds fielding error. Allen then singled to score both Bedford and German. McPherson followed with a single that was exacerbated by a fielding error by the Reds left fielder, and both Holmquist and Allen were able to score on the play. Sipila followed with another single, but McPherson ran through a red light at third and was tagged out at the plate on the relay by the Reds outfield. The inning then came to a sudden stop after Lee, battling a heel injury, grounded out into an easy, 6-4-3 double-play.

Ahead by a touchdown, Holmquist and the Spirits defense set the Reds in order to closeout the second inning. The Reds returned the favor to the Spirits in the top half of the third, and then bounced back with a pair of runs after Sammy Vives singled with one out and Hayes drew a walk with two outs. A single by Roberts to left turned into an error by McPherson, allowing both Vives and Hayes to score on the play. Nutt added a single to keep the inning alive, but Holmquist was able to shut down Smith with a ground ball to get out of the inning.

The Spirits again finished 1-2-3 in the fourth, and the Reds showed signs of life by cutting the score to, 7 to 3 after a leadoff double by Osburn and a single by Duty. Scott reached on a fielder’s choice after Holmquist fielded a medium roller up the middle and threw to Lee at third to cut down Osburn, but a fielding error by Sopocy at short allowed Duty to score. Holmquist was able to get Vives to fly out and Robert Bernardo to ground out to get out of the inning.

Moving into the fifth, the Spirits made up for the lost two runs by adding a pair of their own this time, starting with a leadoff walk to Allen. McPherson flew out but Sipila doubled to score Allen and then made his way to the dish after a throwing blunder by the Reds. Lee was caught looking but Sopocy kept the inning alive after reaching on an error. Hackney then singled, but Nash grounded out to end the scoring with the Spirits now up, 9 to 3.

German relieved Holmquist on the mound and staved off opportunity by the Reds, allowing just a single in the fifth with some solid defense to hold the Reds scoreless. The Spirits then added 3 insurance runs in the sixth after German reached on a one-out single. Holmquist followed with a single and after Allen reached on an error, German was able to score. McPherson then singled home Holmquist and went on to swipe second base, and a follow-up RBI single by Sipila made it 12 to 3, Spirits before Lee went down on swings and Sopocy lined out.

Duty picked up his second hit on the night in the bottom of the sixth following a ground out by Osburn, but German was able to set down Scott on strikes before the City of Farmers Branch ended the game early with a premature sprinkler program that saturated the diamond.

“Good win for us tonight,” Lee commented afterwards. “Hate to see sprinklers be the end of it, but I think we had the game in check. We were a bit short-handed tonight, too. We lost Brant Finchum to a rotator cuff injury for the year and (Will) Nash has been nursing a knee, so (Lester) Bedford was a great addition for this roster. I’m battling a heel injury, and we still have a few guys on the mend from other ailments. It’s truly a team effort when we have guys running the bases that we usually use a courtesy runner for. So hats off to them. And what can I say about Sipila? He’s simply the best hitter I’ve ever seen. Yes, that includes the big boys. It’s amateur baseball, but this man fears nothing. He’s absolutely ripping the cover off of the ball and he’s doing it with ligament damage to one of his hands. Can’t say enough about that guy. We won’t sleep on the Reds. They’re a great team and I’m sure we’ll see plenty from them down the road.”

The team gets back to NTABL Masters League action next Monday night when they visit the Hurricanes starting at 8:45PM at Oran Good Park. Click here for schedule details and be sure to download the iScore Central app to listen to gaves live online. 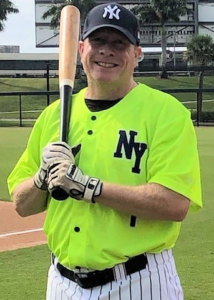