(March 29, 2021 – Dallas, TX) The Spirits (45+) squad returned to the NTAB Masters League on Monday night, making the move from (35+) to (45+) in order to accommodate personnel and the missing arms that helped keep the (35+) squad a household name in previous Veterans League seasons. The Spirits aren’t new to Masters (45+) baseball, having won the league back in 2018.

In the latest edition of (45+) baseball, the Spirits hosted the Hurricanes as the league opened up play at Reverchon Park. Eric McPherson and Kirk Sipila led the Spirits, each earning a pair of hits and a run scored, with Sipila also earning a pair of runs batted in on the night. A solid combination of pitching by starter, Earl German followed by services of John Holmquist, and Sean House kept Hurricanes hitters off balance as the trio combined for a 3-hit shutout. German delivered 4 innings of work, allowing no runs on just one hit. Holmquist added a pair of innings, allowing just a pair of hits and no runs, while House closed up shop by retiring the 3 hitters he faced in one inning of work. Michael Madsen, Mason Gann, and Eric Reifschneider each hit safely for the Hurricanes.

After holding the Hurricanes scoreless in the first, the Spirits picked up their first run in the bottom half of the inning after McPherson singled to lead off the Spirits season offensively. Jason Bottenfield followed with a single to push McPherson to second and after McPherson swiped third, he later scored on an RBI from Sipila after he reached on a fielder’s choice. Travis Hitzeman flew out and Shawn Lee grounded out to end the inning.

The game remained quiet with the Spirits holding a 1 to 0 lead until the bottom of the fourth when the offense opened up for 8 runs. Reifschneider, the Hurricanes starter was replaced by veteran, Hunter Roberts and Roberts quickly retired McPherson to get the first out. Bottenfield then reached on a Hurricanes fielding error and an RBI double by Sipila made the error hurt and gave the ghosts a 2 to 0 lead. Hitzeman singled to push Sipila to third and after Lee was able to reach on another error, Sipila crossed the plate safely to make it 3 to 0. A single by House scored both Hitzeman and Lee and after Brian Hackney hit safely, the Spirits still had two on with one out. David Tipton made it three consecutive hits with an RBI single that scored House, and after Tipton reached second on the throw, Brant Finchum recorded the second out of the inning when he flew out to left. A hard single by Chris Lewis kept the inning alive and scored both Hackney and Tipton and the Spirits had an 8 to 0 lead before John Hefner flew out to stop the bleeding.

The game remained in pitcher’s duel status the rest of the way and when the final three outs were recorded, the Spirits had an 8 to 0 victory to start off the season.

“Great work by our offense once again,” Lee commented after the game. “Pitching was solid as well. The guys did a great job and it was nice to put a few different arms in action rather than relying on a single arm like we always do. I was proud of their effort on the mound tonight.”

The team returns to action next Monday night when they face the 2020 returning champion, Caddo Reds once again at Reverchon Park. First pitch is slated for 7:00PM and you can click here for schedule details or to download the iScore Central app to listen to the game live online. 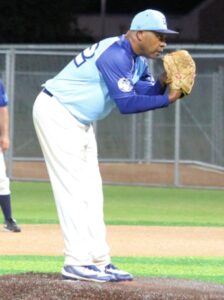