(August 23, 2021 – Plano, TX) The offense that was missing slightly just a week earlier was found alive and well on Graham Field Wednesday night as the Spirits (45+) squad used 13 hits to put up a ten-spot in a 10 to 0 win over the Knights in NTABL Masters League action.

Dan Sosa was the offensive hero, leading the ghosts with a 3-for-3 performance that included 3 runs batted in. Kirk Sipila, Brant Finchum, and Shawn Hunt each added a pair of hits on the night as well, and a combination shutout by starter, John Holmquist followed by shutdown innings from Earl German and Sean House proved to be too much for Knights hitters. Holmquist no-hit the Knights for 3 innings, walking just one and striking out two. German allowed just a pair if hits, and House also allowed a pair of hits against one walk and 3 strikeouts as the battery of arms held the Knights scoreless.

The Spirits started the bottom half of the first with back-to-back leadoff hits by Eric Goetz and Sipila. Goetz was able to reach third on an error by the Knights outfield and scored on Sipila’s single, but Shawn Lee grounded into a double-play and House grounded out and the inning finished as fast as it had started. Fast forward to the second inning and it was Hunt, Finchum, and Sosa each with singles after two outs leading to Hunt crossing the dish to make it 2 to 0, Spirits.

The Knights went in order in the third and in the bottom half of the frame, the Spirits exploded for 7 more runs after Holmquist led off with a single and swiped second. Goetz and Sipila both walked the bases loaded, but Holmquist was eventually squeezed at the dish after Lee reached on the fielder’s choice. Goetz later scored on a wild pitch that allowed both the other runners to advance. House then grounded out, but good enough to score Sipila, and a follow up single by David Tipton scored Lee. Tipton stole second and then moved to third on a single by Brian Hackney. Hunt followed with a single to score Tipton, and Finchum loaded the bags with a single. Sosa followed up with another RBI single, and a walk to German provided another Spirits run. Holmquist made it back-to-back RBI walks after earning a free pass and Goetz finally flew out to stop the wholesale scoring.

The Spirits made it 10 to 0 in the fifth inning after Hunt reached on a two-out error. Finchum also reached on an Knights error that allowed Hunt to move over to third, and a single by Sosa scored Hunt to round off the scoring at an even 10 runs.

House came in to shut down the Knights in the sixth, despite a lead off single by Scott McCain. Scott Bale then reached on a fielder’s choice that squeezed McCain at second and a walk to Harlen McCaskey made the Knights sixth a little interesting before House shut it down with back-to-back strikeouts.

The Spirits went quietly in the bottom half of the inning despite a single by Sipila with two outs, and House rallied to shut down the Knights in the seventh to close out the game and to give the Spirits the win.

The team takes back to the diamond next Wednesday night when they host the Dallas Bulls on Graham Field starting at 6:30PM. Click here for schedule details. 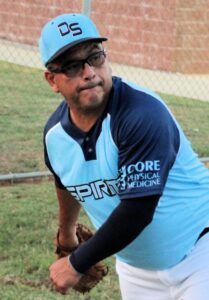 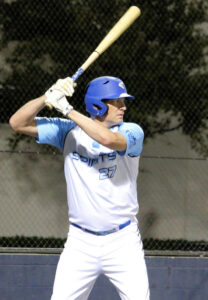