(July 30, 2020 – Carrollton, TX) Just a week ago, the Spirits (35+) offense struggled against the Dallas Cardinals until late in the game where a small rally tightened the score briefly before the Spirits finally fell by the score of 7 to 4. As noted in the previous game story, hits were few and far between and difficult to find with 13 hitters in the lineup. This Thursday’s match-up between the two teams on the same field and at the same time was poised to be a bit of the same, this time with the Spirits sending 14 hitters to the lineup. However, after finding themselves quickly behind 4 to 0, the Spirits bats had something else in mind as a storm was brewing both metaphorically and above the North Texas skies.

The skies eventually opened up, but it wasn’t in the form of rain falling from the sky but rather baseballs leaving the bats of the Spirits offense. It was the Cardinals who started things off quickly, picking up 4 runs in the top half of the first after Joe Lowry reached on an error and Kevin Fought drew a walk. Jerry Gamez followed with an RBI single to score Lowry and Phil Bosco drew a walk to load the bases back up for Guy Koenig. Spirits starter, Brant Finchum had Koenig at 0-2 in the count and then followed with a payoff pitch that landed in the soft spot of Koenig’s back to give the former Spirit an easy RBI. Dustin Harrison then blasted a single to score both Gamez and Bosco and just like that, the Spirits were down 4 to 0 with nobody out. Finchum was then able to get Mark Tierney to fly out, and after Harrison swiped second, Jason New also flew out and Jason Powell went down looking to end the inning.

“Honestly, when we were down 4 to 0 that quick, I turned to one of my teammates joining me on the bench and said maybe it’s time I go back to slow pitch softball,” Shawn Lee mentioned after the Cardinals hot start. “We’ve been struggling on offense and the idea that we had 14 mouths to feed was a little demoralizing. My goal each game is to get our top hitters like McPherson, Sipila and Hitzeman as many at-bats as we can, but you also need to keep your guys happy. But man, did they respond and prove me wrong.” 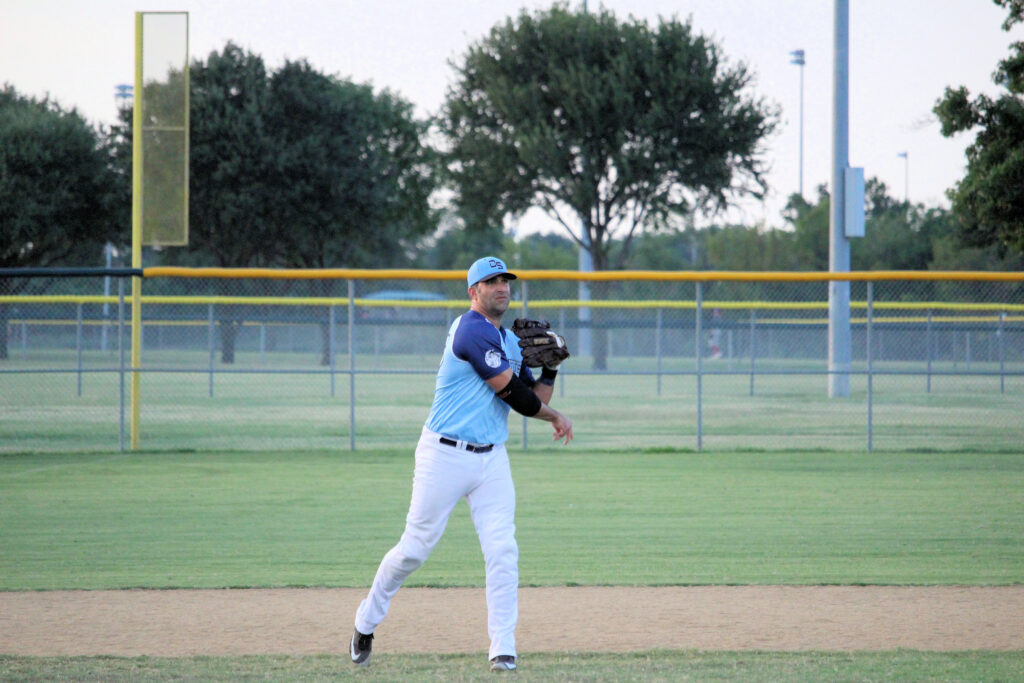 Travis Hitzeman throws out a runner while playing third. Hitzeman homered Thursday night and finished with a pair of hits, 3 runs scored and 4 RBIs as the Spirits cruised to a 21 to 9 win over the Cardinals.

Lee’s reference to a response came in the form of wholesale base runners for the ghosts in the bottom half of the inning when all offensive hell broke loose. The Spirits exploded for a ten-spot after Eric McPherson reached on a one-out walk. Facing the Cardinals’ knuckle-baller, Jason Gutierrez is typically a challenging feat for a number of the Spirits big hitters, but tonight appeared to be different. McPherson proceeded to steal second and Kirk Sipila singled to put runners at the corners. On the next pitch to Travis Hitzeman, he promptly put the ball into orbit over the scoreboard in the left-center field gap with a 3-run home run to cut the score to 4 to 3. Lee followed with a bloop single up the middle and after Brian Hackney reached on a Cardinals miscue attempt to turn a double-play, Lee moved to third and then scored after Chris Lewis singled up the middle. Hackney later scored after Duane Aponte singled to keep the offense rolling and Lewis went on to score after Shawn Hunt singled. Finchum singled to load the bases and a base-clearing triple by David Tipton to the right-center field gap made it 9 to 4, Spirits. The Cardinals had seen enough of their veteran knuckle-baller and turned to Dustin Harrison to try to stop the bleeding. Tipton was then able to score when Jonathan Duran grounded out and although Grant Martin singled to keep the inning alive, Harrison was able to get Earl German to ground out to end the inning.

“If you would have told me we’d bat around with 14, I’d have told you that you’d been drinking,” continued Lee. “Insane that all the guys showed up to fire on offense on the same night. Don’t get me wrong, it’s awesome, but how often does that happen with 14 players. We were pretty fired up to hit after that and that’s a great feeling to have in the dugout.”

Cardinals bats responded quickly in the top half of the second, however after Scott Baxley led off with a double and Lowry was hit by a pitch. It would be one of 5 times the Spirits would bean a Cardinal before it was over and 6 overall as the Cardinals returned the favor later in the game. Fought followed up with a 2-run double to score both runners and later scored on a single by Jerry Gamez to cut the Spirits lead to 10 to 7. The Spirits relieved Finchum of his pitching duties and turned to “old trusty,” Duran to attempt to get some outs. Duran then hit Bosco with a pitch and a single by Gamez loaded the bases with one out. Harrison then grounded to Hitzeman at third and Hitzeman took out Gamez on the force at home to spare the run and a ground out by Tierney that allowed Hitzeman to field and step on the bag ended the rally.

Expecting a new game in the mix, the Spirits came up in the bottom half of the second and picked up right were they left off in the first, as Cliff Brade wore a Harrison pitch to reach base and then swiped second base. McPherson drew an 8-pitch walk and Sipila loaded them up after reaching on another Cardinals fielding error. Hitzeman was able to crush a single to right to score Brade and Lee followed with a hold-your-breath shot to the gap that fell just short of a grand slam but allowed McPherson to tag and score to complete the sacrifice fly out. Hackney was then able to load the bases one more time after reaching on an error and Lewis was able to move the runners after reaching on a fielder’s choice that squeezed Hackney at second but allowed Sipila to score. Lewis followed by stealing the empty bag at second and Aponte reloaded the bases by drawing a walk. Hunt was then able to capitalize by also reaching on an error that allowed both Hitzeman and Lewis to score to make it 15 to 7, Spirits before Finchum went down looking.

The Cardinals didn’t appear to want to lay down as they once again bounced back in the third with a pair of runs after New singled and Powell wore another Duran pitch. Baxley then grounded into a double-play that kept the Spirits defense fired up, but after New reached third Lowry made it runners at the corners after becoming Duran’s third victim of a hit-by-pitch. Fought made the pitching miscue hurt as he followed up with a single that allowed both runners to score and the Spirits lead was cut to 15 to 9 before Duran was able to recover and get Gamez to fly out.

Things actually calmed for a full inning before the Spirits offense went on the attack again in the bottom of the fourth inning. Baxley replaced Harrison as the Cardinals pitcher and McPherson and Sipila were able to draw back-to-back walks. Hitzeman reached on an error to load the bags and Lee followed up with an RBI single on the next pitch to score McPherson. Hackney then followed with an RBI single to score Sipila and Lewis followed suit with another RBI single to score Hitzeman. Aponte drew an RBI walk to score Lee and Hunt popped up to the infield for out number one. Finchum then grounded out, but all the Spirits runners were able to move forward on the play, including Hackney crossing the dish for run number 20. Lewis was then able to score on a wild pitch from Baxley and after Tipton drew a walk to keep the inning rolling, Duran grounded out to put the Cardinals out of their misery as the Spirits would eventually close up shop with a 21 to 9 win.

Powell led off the Cardinals fifth with a single and after Baxley tagged one to Hitzeman who was able to just get his glove up to snare the hard line drive for an out, Aponte followed up by snaring a second line drive, this time by Lowry and Aponte as then able to relay to Hackney at first to pick off Powell to end the game with a double-play.

Lee continued to praise his team following the game. “Again, lots of fun tonight. Just an outstanding job of having 14 players to take care of, all of them hitting the ball, cheering one another and then gladly swapping positions so everyone could play. Wish it could be like that every game, but we’ll just enjoy this one for now. Great job by Duran to settle us down defensively and work through 4 innings allowing just a pair of runs. The Cardinals had an off night. That’s a great ball club and I’m glad they let us have some fun. A lot of other teams can get some stuff in the head over a loss like that. We’ve certainly been on the losing side of games like this, but the Cardinals are a great set of guys. I don’t expect they’ll think any of this is funny the next time we face them so we’ll just let this one go and prepare to work hard the next time.”

The Spirits return to action on an off night next week as they host the Dodgers at McInnish Park, Field #10 at 7:30PM on Monday, August 3rd and will turn around quickly to face the Knights on Thursday, August 6th at McInnish Park, Field #11 at 8:45PM. Click on the game links to review schedule details and to learn how to download the iScore Central app to listen to Spirits baseball live online!