(August 15, 2017 – Dallas, TX) The Dallas Spirits (18+) squad are your NTABL Open American League Champions.The young guns finished off the Oak Cliff Pelicans Tuesday night to win the best-of-three series, two games to none, and with the victory finish their debut year within the NTABL at 21-3.

As the visiting team for the second game of the series, the Spirits started things right away in the first inning after JP Seider singled and was later squeezed when Collin Stacha reached on a one-out fielder’s choice. Leaving one on with two out, Stacha was able to reach second on a wild pitch from Pelicans pitcher, Vance Woodruff. Stacha was able to come around and score on a solid RBI single by Kyle Redinger and the Spirits led the game, 1 to 0.

Despite a single by Daniel Morrow and a walk given up to Nathan David, Spirits pitcher, Duane Aponte was able to shut down any first inning scoring opportunities for the Pelicans. Aponte struck out the first hitter he faced, Tristan Cummings and was able to get David Stewart to fly out and Stephen O’Roark to line out.

The Spirits tacked on another pair of runs when Teddy Croft picked up one of his four hits on the evening, singling to left field with one out. Croft advanced to second on a single by Justin Anderson, and both runners advanced after Aponte loaded the bases with a single. Croft was then able to score on another wild pitch from Woodruff and the merry-go-round of advancing bases and crossing the plate for free continued as Woodruff let his mistakes get the best of him. Woodruff put two additional pitches into the turf, one of which scored Anderson. Carl Suverkrop eventually went down swinging following a great, six-pitch at-bat, and Cliff Brade ended the inning with a ground out. Aponte only needed 9 pitches in the bottom half of the second, despite a seven-pitch at-bat from Greg Borum as he set the birds down in order, 1-2-3. After two complete, the Spirits led 3 to 0.

The Pelicans were able to set the Spirits down in order to start the third and finally broke ice with scoring in the bottom half of the inning when Cummings singled with two out. Stewart also singled and the Pelicans hit pay dirt when Daniel Morrow hit one deep enough to left field to one-hop the fence for a ground-rule double. The big hit scored Cummings, but Aponte was able to get David to fly out and after three full innings of play, the Spirits led 3 to 1.

Not to be outdone in any inning, the Spirits returned the favor by plating another run in the fourth when Mike Werner hit a ground-rule double and then later scored on Croft’s second single on the evening. Both teams played well defensively moving to the sixth inning when the Pelicans picked up another run on an RBI single by Morrow. The Spirits answer in the inning came in the form of Stacha wearing his thirteenth pitch on the season. As the team-leading ball-magnet, Stacha took his free pass to first base and advanced to second on another misguided pitch from Woodruff. Redinger drew a walk and the team executed a perfectly-timed double-steal and the Spirits had runners in scoring position with nobody out. Pelican’s manager, Patty Evans turned to a replacement pitcher in the form of Michael Elefante, who was able to get Werner on swings. John Showalter then drove the next pitch from Elefante to left field for a sacrifice fly to score Stacha, but the inning was cut short when Redinger attempted to aggressively take third on the play and was gunned down by the Pelicans left-fielder.

With a 5 to 2 lead heading into the bottom half of the sixth, Showalter decided to hand the ball over to former Trinity University and Houston native pitcher, Teddy Turner. Turner had one previous appearance earlier in the season when he picked up a victory over the same Pelicans squad. Turner needed a few pitches to get settled, but after handing over a free pass to lead off hitter Nathan David, he followed by striking out O’Roark. David stole second and later advanced to third when Turner forced Kevin Beck to ground out. David later found his way to the dish after a Turner pitch was able to dodge the glove of Croft at home. Despite a follow up single from Clint Brown, Turner was able to retire Borum to get out of the inning with a 5 to 3 lead. 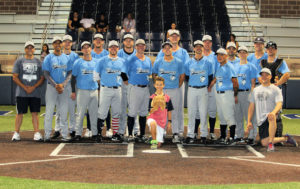 Croft led off the seventh with a triple to the gap, but the Spirits weren’t able to get him the extra 90 feet as Elefante was able to strike out two of the next three Spirits he faced and was able to get Aponte to flyout. The triple by Croft was his third hit on the game during his 4-hit evening, and it appeared he was making up for his absence from game one of the series. Croft was later asked about his motivation on his big night and he commented, “Coming off an 0-for-8 slump in my last two games, I had to focus on remaining confident and trusting my ability. I wasn’t looking to do too much in my second at bat with a runner on third. I was trying to go the other way and give him a chance to score. I sat on a fastball and I was able to put the barrel on the ball to bring him in. The second pitcher (Elefante) was throwing a bit harder than the first pitcher, but wasn’t always hitting the zone. He also threw a lot of fastballs and thanks to Mike’s (Werner) bat, I was able to get a hold of one and somehow make it all the way to third. It was a great team effort against two good pitchers tonight and I am very happy to have contributed to a great win.”

The other Teddy also provided some fuel to the victory, shutting down Pelicans hitters while allowing only one earned run on a single hit, walking 2 and striking out 6. Turner only seemed to get better following a miscue on a pick off attempt to first that was followed by some chatter out of the Pelicans dugout. The Spirits added their sixth and final run in the ninth inning on an RBI single and on the fourth hit of the evening from Croft. Turner subsequently followed “Teddy Night” at Jesuit by striking out 2 of the final 3 Pelicans he faced and capped off his team’s title victory by getting J Ruhlman to fly out to Suverkrop to end the game. “Their chatter made it fun,” commented Turner following the victory. “It makes the game more intense and it’s a motivator for me to sit down their hitters. I definitely made a mistake on the pick off move, and that’s when I started getting an earful from them. A few pitches later, I was able to get a little redemption when I bare-handed that chopper up the middle and gunned down the guy at the plate. That felt great! When our guys returned the smack toward their banter, it was game-on. I felt a bit rusty due to my break from pitching (Turner hadn’t last pitched since May, nearly 3 months to the day), and it took me a couple of innings to get a handle on my curveball. I battled some soreness as well, but I was able to place my fastball decently and the combo of starting hitters off with an off-speed pitch followed by bringing the fastball appeared to be effective.”

Team Manager, John Showalter was in great spirits following the game. “We knew coming into tonight’s game that the Pelicans would give us all they had. They’re a great team and the idea of a game three, winner-take-all game wasn’t something we wanted anything to do with. With the championship so close, I knew there was no one better to give the start to than our ace (pitcher), Duane Aponte. He has to be as close to a sure-thing as one can have all year long and today was no different. Coming into this season I knew we had a talented group of guys with great team chemistry. Our two previous seasons resulted in us playing for a league championship, but coming up just short. This being our first season as part of the best league in Dallas, there was some uncertainty as to how things would play out. Turns out, as the season progressed there were a few ups and downs, but with the support from Shawn (Lee), our club President and GM, we made some mid-season acquisitions that took a good team and made it a great team. To win a title it takes dedication from all parties involved and this was a total team effort. From the utility/roll player to the starter, each man that donned Spirits blue did his part in making this season a success.”

The Open (18+) squad finishes the season with a .353 team batting average while holding opponents to just .239. They scored 201 runs while holding opponents to just 88 and out-hit opponents, 269 to 167. Spirits pitching allowed only 69 earned runs on the season, completing 2017 with an ERA of 3.35, compared to 8.12 from opposition pitching. Spirits pitchers stuck out 169 opposing hitters, while walking 63 for a 2.62 K/BB ratio. The Dallas Spirits (18+) squad and Manager, John Showalter would like to thank their families and significant others for their generous support during the season and for sharing of their free time. From the bottom of their hearts, “we love you and thank you!”