(April 13, 2022 – Euless, TX) That’s probably not a headline you often read when it comes to Spirits baseball. Read it again. Solid defense. That was the story on Wednesday night as the Spirits (40+) squad remained stout defensively behind a solid and complete-game effort by pitcher, Jonathan Duran. The team left the field without a single error and pulled off some solid plays defensively. Numerous players made big plays on defense that could have easily turned the game into a different direction. Solid play by the entire infield, including Travis Hitzeman at third, Mike Sopocy at shortstop, and Stacy Scott at second helped seal a game that was waiting for a mistake by either side to run in a different direction.

Each of the Spirits outfielders also played a role, stepping up to make plays at different times during the game, including essentially what could have been a game-saving catch by Eric Goetz to record the game’s final out.

“The guys were terrific tonight,” Shawn Lee mentioned after his team’s win. “Travis made several big ones from third. Mike turned a double-play on his own. Stacy made several stops on each side of his position, and the outfield was on point. I make mention of this all the time. ‘Making a play.’ We always seem to have an event or two that takes us in another direction. Tonight, the guys were like a brick wall out there. Nothing was getting past them. Eric McPherson made a couple of nice plays, as did Goetz in center. We also had David Tipton back tonight and he chased down a couple of important outs. All of this was possible because we had Duran up there pitching a great game. It’s awesome when we put it all together. I think this is the first game our offense was ‘quiet’ all season. Nice to see the defense step up to help earn the victory.”

The game easily could have taken a different turn, and that started in the top half of the first when the visiting Killer Bees started off the game with a double by Charles Carr. Michael Scott grounded out, but Carr was able to take third and another ground out, this time by Chris Jimenez allowed Carr to score to give the Bees a 1 to 0 lead before Duran retired Manuel Rodriguez with a ground ball.

The Spirits tied things up in the bottom half of the inning after McPherson and Kirk Sipila started things with back-to-back singles. Hitzeman grounded out to squeeze Sipila at second, but McPherson moved to third on the play. Lee then reached on an error that allowed McPherson to score and the game was tied before Sopocy flew out to closeout the inning.

Jumping to the bottom of the second, the Spirits offense added another 3 runs after Will Nash and Goetz both led the inning off with singles. Shawn Hunt flew out, but Tipton walked to load the bags and a deep single by Scott played bot Nash and Goetz. Tipton scored on the next play, a fielder’s choice that squeezed Scott at second and allowed Duran aboard. A double by McPherson pushed Duran to third, but both runners were stranded after Sipila flew out to end the second.

Up 4 to 1, Duran and his defense delivered for several innings. Plays were solid on defense, not just routine, with players getting in front of balls, recovering any bobbles, and making great throws to first. Fast forward to the sixth inning and the Bees begin to make it a ball game. Alex Benitez led off with a single but was cut down moments later after Parker grounded into a 6-6-3 double-play. Levy followed with a two-out single for the Bees, and back-to-back singles by Carr and Scott allowed Levy to score to cut the lead to, 4 to 2 before Jiminez grounded out.

The Spirits added some insurance in the bottom half of the inning after Hitzeman doubled with one out. Lee went down on swings, but Sopocy came through with an RBI single to score Hitzeman and the ghosts had a 5 to 2 lead heading into the seventh. Despite a single by Steve Trocchio, the defense held its ground and the game ended on a great play by Goetz in the outfield, snaring a hard hit fly ball to the gap to close out the game and to give the Spirits their third win on the season.

“Not much else to say,” continued Lee. “Well played game with solid pitching on both sides. We took advantage of their mistakes, had some key hits with runners aboard, and just sat back to watch Duran and the defense carry us to a win.”

The Spirits return to action next Wednesday night when they host the Brewers. First pitch is scheduled for 6:30PM at Texas Star on Legends Field. Click here for schedule details and don’t forget to download the iScore Central app to listen live online. 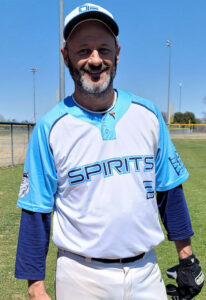 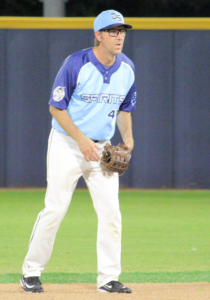