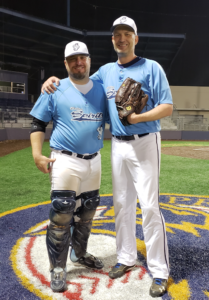 (April 30, 2018 – Plano, TX) ‘Twas the night before May 1st, and over on Graham Field…not a player was talking about John’s no-no…until the final Reds hitter crushed John Holmquist’s dream this past Monday night in NTABL Masters League play.

Holmquist was nearly perfect for the Spirits (45+) squad, looking to become the second pitcher in the team’s history to deliver a hit-less game. Holmquist delivered 6 perfect innings, technically 6 and 2/3 innings until Bobby Michaelides went opposite-field with a slap-single to break up the no-hit bid.

“John pitched a hell of a game for us tonight,” commented Club Manager, Shawn Lee following the game. “He’s always solid, but tonight he seemed to have a near-perfect combination of pitches that shut down the Reds hitting. Patrick (Bilgere) did a great job calling the game as well behind the plate. There wasn’t a lot of chatter about John’s work as the game unfolded to its final innings. I noticed when we headed out for defense in the sixth that he had one going. And then we had a few opportunities to help him out with it, but that final hit with two outs was a killer.”

Lee referred to the game’s seventh and final inning of play when the Spirits defense took the field to help Holmquist seal the deal. Joel Chirino started off the Reds half of the final inning with a soft grounder to shortstop, Eric McPherson. McPherson made a solid play on the ball but his throw to first drew Brian Hackney off the bag allowing Chirino to reach on an error. It appeared the defense would make up for the error on the next play when Rod Hicks grounded into a 4-6-3 double-play, leaving Holmquist just one out from perfection. Javier Mendez then reached on a second error on the Spirits infield, which in turn brought up Michaelides. Holmquist evened the count at 2-2 and was literally a strike away from his no-hit bid before Michaelides slapped a singled to left field. Lee, handling left field duties charged the ball and made a bare-handed prayer throw to first to save Holmquist’s attempt at fate, however Michaelides beat out the play and scored the Reds first hit and run of the game after the Spirits allowed Mendez to take second and third while focusing on the hitter. Holmquist and company then retired Rob Medel with a ground out to pick up a 9 to 1 victory.

The Spirits offense struck first in the top half of the second after McPherson singled with one out. McPherson went on to steal second and then scored on a single by Chris Lewis. Lewis then took second on a passed ball and Jack Nash reached on a error good enough to score Lewis to give the ghosts a 2 to 0 lead.

The Spirits made it 8 to 0 in the fourth after the offense opened up against Reds pitcher, Bill Lee and the 25+ mph winds blowing in at Graham Field. McPherson reached on an error and then advanced to second on a single by Bilgere. Lewis then singled to load the bases and McPherson then scored on a sac fly by Nash. Earl German loaded the bases with another single, and Mark Leemaster picked up a pair of RBIs scoring Bilgere and Lewis with a solid hit to right. German advanced to third and after Leemaster stole second, David Tipton drew a walk. German was able to score on a wild pitch and the Spirits put runners at the corners with two outs after Brant Finchum squeezed Tipton at second while reaching on a fielder’s choice. Guy Koenig followed with a single to score both Leemaster and Finchum after Finchum stole second and the Spirits were up 8 to 0.

The Spirits picked up run number 9 in the fifth inning after Lee drew a base on balls to start off the inning and then reached third after Bilgere singled. Lee later scored on a ground out by Lewis.

After the game, Holmquist commented: “I felt great warming up and had some extra zip on my fastball. After snaring that line drive hit at me in the first inning and (David) Tipton made that sliding catch in the outfield to close out the inning, I felt that we had some momentum going. Patrick (Bilgere) called a great game from behind the dish, and I felt I could throw every pitch for a strike or try to miss the zone effectively. The Reds fought us until that very last out and are a class organization. I love this team and this league and thank God for the health and opportunity to play baseball competitively.”

When looking at the game’s final box score, Holmquist pitched a complete-game victory, allowing the only hit with two outs in the seventh and final inning, walking none, and striking out 5. The win pushes the squad to a perfect, 5-0 record to start the season.

The Spirits (45+) squad returns to action next Monday night as they host the North Dallas Bulls at Graham Field with a 6:30PM first pitch. The team decimated the Bulls in their first match-up by a score of 25-2. Click here to view schedule details, obtain directions to the game, or to download the iScore app to watch and listen to the game! 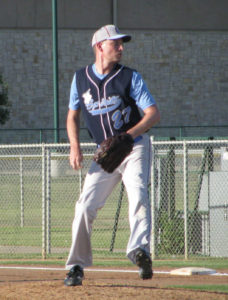 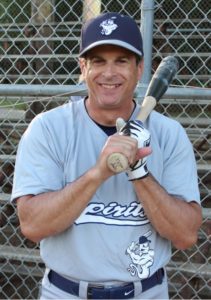