(June 23, 2016 – Dallas, TX) The Spirits (35+) made it look easy Thursday night at Jesuit College Preparatory, coasting to victory over the Braves 8 to 0 behind the hitting of Jonathan Duran and the arm of Craig Molldrem. The team unleashed with 15 hits, scoring all 8 runs as earned runs yet leaving 10 runners left on base.

“The guys remained focused and that’s all I can ask for,” manager Shawn Lee commented following the contest. “There’s a really nice formula showing up here each week, combined with some consistency and a will to play and win. The guys aren’t just showing up. They remain supportive of one another and focused each game despite being up 5 runs or down 2 runs. That’s key to winning games.”

Focused is what exactly Duran and Molldrem appeared to be on this particular evening. Molldrem went 6 innings and needed only 67 pitches to strike out 13 Braves hitters. Molldrem once again chased a no-hitter through the 5th inning, until John Crossley reached his bat out and dropped a slow, bloop roller between the pitcher’s mound and shortstop. Brant Finchum was playing at regular depth and wasn’t able to chase it down to get Crossley before he made it safely on the infield single. It appeared to be the last thing that mattered to Molldrem, who remains extremely humble despite his pitching talent. Outside his one-hit gem and 13 Ks, Molldrem pitched 57 strikes compared to just 10 balls.

“What can you say about Craig? His numbers were ridiculous,” noted Lee. “The numbers will do the speaking today, but we’re lucky to have him. He and Duran carried us today. The rest of us just filled the other 7 spots on the field.” Lee was clearly making reference to the offense provided by Molldrem and Duran as well. Molldrem added a 2 for 2 performance from the plate, which included a sacrifice fly, a base on balls, 2 singles, and 3 RBI. Duran also lit it up from the dish going 4 for 4 with a double, 3 singles, and 3 runs scored. Duran also closed out the final inning of the game from the mound. Third baseman John Show added some additional offense with a double, 2 RBI, and a run scored, and left fielder Shawn Lee remained hot at the plate by adding a pair of singles and a run scored.

Cliff Brade, Jason Bottenfield, Eric McPherson, David Dillon, Tom Miller, and Brant Finchum all singled to complete the offensive roundup for the Spirits, with Miller, Bottenfield, and Dillon each adding a run batted in (RBI).

The victory advances the Spirits to a half-game out of first place behind Modoc for wihch the team currently holds the tiebreaker based on an earlier victory over Modoc this season. The team returns to action Thursday, June 30 as they host the Orioles at Jesuit College Preparatory in Dallas. First pitch is at 7:00PM. 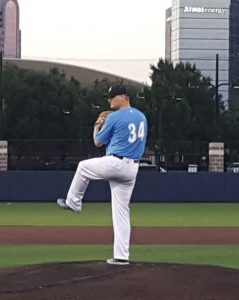