(September 14, 2017 – Dallas, TX) The Dallas Spirits (35+) are your 2017 NTABL Veterans League Champions! The team used a fourth inning rally and minor offensive explosion to overcome a 1 to 0 deficit in a game that was very much a pitcher’s duel. The Spirits sent their ace-in-the-hole, Craig Molldrem to the mound for the big game and Dallas Modoc countered with Jerry Anderson, a pitcher with a solid arsenal of different pitches and an ability to hit spots on the plate on command. Neither pitcher disappointed as Molldrem went on to strike out 11 Modoc hitters, while Anderson struck out 9 Spirits.

Molldrem and the Spirits were able to get lead off hitter, Jay Langston to ground out and Molldrem followed by striking out two of the next three hitters he faced. Catcher, Chris Cec was able to beat out an infield single up the middle and advanced to second on a wild pitch, but Molldrem settled and finished off Matt Garabrants to get out of the inning. In the bottom half of the first, Anderson also faced four hitters, striking out lead off hitter, Cliff Brade and then getting Travis Hitzeman and John Mahalik to fly out and strike out, respectively, after Kirk Sipila reached on a single.

In the second, the Spirits faced a bases loaded jam after Molldrem picked up his third strikeout and was able to get James Gardner to ground out. Jason Rae and Josh Claudio reached on a pair of Spirits infield errors, and Eddie Paschall followed with a walk after going 3-0 only to see Mollrem even the count before a questionable ball four call sent Paschall to first. With the bases loaded and two out, Molldrem composed himself and followed by setting down Travis Rae on 4 pitches for his fourth K on the night. In the bottom half of the inning, it was a little more of the same for Anderson as he was able to strikeout both Shawn Lee and Molldrem to start the inning before center fielder, David Tipton drew a 6-pitch walk and Patrick Bilgere followed with a single. During the relay to attempt to tag Tipton out, who had headed for third, the ball made it’s way past the Modoc third baseman and into a grey area of the Spirits dugout and what might be considered the field of play behind the dugout fencing. The ball caromed off a bag sitting in the area and Tipton made his way for home. Modoc’s third basemen recovered the ball and threw a strike to Cec awaiting at the dish and the call by the umpires was out. Despite a brief argument from Lee and his team, the call stood and Modoc was out of the inning.

“It’s a judgment call,” commented Lee following the game. “In the heat of the moment, we obviously didn’t like it, but the umps felt the ball was still in play and Modoc made a nice play on it to get Tip (Tipton) at home. I was more concerned about the strike zone. For some reason a curve ball wasn’t a strike call tonight, but it’s part of the game. I thought Molldy (Molldrem) got squeezed more than he should have, but in a game like this everything is magnified. Those guys do a great job calling games all year for us, so I’m not going to make it about the umps.”

In the top half of the third, Modoc drew first blood on the scoreboard in what would turn out to be their only run on the evening. Langston led the inning off with a single and Anderson followed by reaching on an error by the Spirits infield. Langston was able to advance to third and then scored after Cec grounded up the middle and the Spirits attempted to pick up a double-play. Anderson was squeezed at second and Cec was safe at first on the fielder’s choice with one out. In an unusual turn of events, the Spirits followed by picking up a double-play when Moldrem was able to strike out Garrabrants and Bilgere fired to second in an attempt to catch Cec stealing second. Just past three-quarters of the way to the bag, Cec went down immediately in what appeared to be an obvious hamstring injury. The Spirits were able to get the easy out, but the injury turned out to be too much for Modoc’s team captain and solid-hitting catcher as he did not return.

The Spirits went in order in the bottom half of the inning and Modoc followed with a single in the top half of the fourth that led to nothing. In the bottom half of the fourth, the Spirits found the right combination of hitting and bad timing for the Modoc defense as Brade started off the inning by reaching on an error by the Modoc shortstop. Anderson made a pickoff attempt at the speedy Brade and first baseman, Steve Hahn was unable to corral the throw, which allowed Brade to advance to second. Sipila drew a walk and the Spirits were in business with two on and nobody out. Hitzeman followed with a looping fly ball to left field, which the left fielder dropped and the bases were loaded with no outs. Mahalik followed with a single to score both Brade and Sipila and the Spirits were up, 2 to 1. Anderson was able to cut down Lee for the second time on a called third strike and Molldrem decided to rise to the occasion by blasting a double to the right-center field wall that was good enough to score both Hitzeman and Sipila. Anderson got Tipton swinging, but Bilgere was able to reach on another Modoc error. Designated hitter, Chris Lewis stepped up and followed with a blooping single to right to score Molldrem and the Spirits led the game, 5 to 1.

The game didn’t appear to be the same for Modoc without their team leader the rest of the way as Molldrem and his defense appeared to have their way with Modoc hitters the rest of the game. The Spirits picked up an additional run in the sixth on back-to-back doubles by Sipila and Hitzeman and despite a single by Rae in the top half of the seventh, Molldrem picked up strikeouts 10 and 11 to end the game and seal the Spirits (35+) championship by ousting defending 2016 champion, Modoc.

“It feels great to finish on top this time,” continued Lee following his team’s victory. “Modoc is a great baseball team and we wouldn’t have it any other way. We have been close so many times and I remember that feeling how we planned on getting them next year, whomever it was that was breaking our hearts. This time it’s us and it feels good. We’ve worked hard to piece together a great baseball team and a great ball club and I’m proud of each and every one of these guys. We have a great pitcher in Molldrem and this year, his bat was off the charts, but we also have a team of guys that can hit the ball. Our team gets in done offensively and defensively and that’s no discredit to Craig. There’s a solid representative at each and every position of this team and they each rock at the spot they play. Lewis had some key hits this season and we can always rely on his hitting. In fact, all of the guys have come up big at some point this season. Having Sip (Sipila) and Patrick (Bilgere) back with us provided us with incredible offense and knowledge of the game. Adding Hitzeman and Mahalik gave us depth and power. When you surround yourself with great people, great things happen. And that extends to our family, friends, spouses, any anyone else who supported us off the field this season. We’re excited about being number one!”

The Spirits won’t take much of a break before they enter Fall League play, staring this Sunday. The club will send two different teams to the NTABL Fall Ball League, representing both the Trinity and Brazos Divisions. The Spirits (Brazos) squad will visit the Knights at Jesuit College Preparatory in Dallas with a 1:15PM first pitch Sunday, while the Spirits (Trinity) squad hosts the Braves at Graham Field Sunday afternoon at 3:45PM. The Dallas Spirits Baseball Club thanks all friends, family, and fans for their support in 2017! 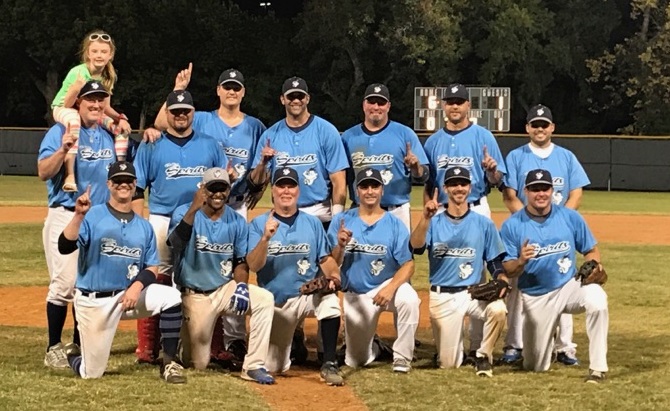