(March 26, 2017 – Dallas, TX) The Dallas Spirits (18+) team opened their inaugural 2017 campaign in mid-season form as they pummeled the Athletics 13 to 0 at Graham Field on Sunday afternoon. In what turned out to be a thunderous night across the metroplex in terms of weather appeared to cross over to baseball as well. The Spirits made some thunder of their own scoring early and often in a game that was decidedly lopsided.

Outfielder Cliff Brade started the scoring in the top of the first inning after reaching with a lead off walk. He successfully swiped both second and third base and would go on to score following the first of two ground-rule doubles on the night by cleanup hitter, Collin Stacha. The Spirits never looked back, scoring 13 runs on 15 hits, 12 of which were earned.

“Cliff was definitely in mid-season form tonight. He showed great patience and did everything you could ask of from a lead off hitter. Patience, speed, and power. What can you say when a guy scores 4 runs in 4 plate appearances; plus one of those runs coming on an inside-the-park home run? To say we are pleased with his night is an understatement,” noted a jovial team manager John Showalter in his first game as the Spirits (18+) team manager.

In addition to the offensive output, the Spirits flashed unblemished leather behind a trio of solid pitching performances. Craig Molldrem started the evening with 3 solid innings that set the pace for what was to follow. Newcomer Thomas Stoltz and Fall Ball star Dr. Jared Wood each threw two clean frames of their own. The pitchers combined to strikeout 12 Athletics hitters and when the Athletics did find opportunity to make contact, they found it difficult to find holes in what turned out to be error-free defense behind the solid Spirits pitching.

Showalter followed up indicating, “I couldn’t be more impressed with the way our guys flashed the leather out there tonight. The only chance that was in doubt was my own short-hopped throw to first midway through the game. Our first baseman (Eric Goetz) really bailed me out with a great scoop. Glad I wasn’t the one to interrupt the Error column on the scoreboard!”

Some of those fielding highlights came from second baseman Michael Werner. Werner was able to force out Athletics hitter Matthew Topps on a great effort within the infield. He had to range far to his left to make the sliding stop on a sharply hit ground ball that was bound for right field. After a brief bobble, Werner was able to make a strong and accurate throw to first. The play was a close one, but the umpire saw the play in the Spirits favor and Topps was called out.

“This was a great team win,” continued Showalter. “From top to bottom, each man was a contributor. We saw timely hits and pitching that overpowered our opponents’ hitting, and more importantly, great defense. I can’t think of a better way to start off our 2017 season. We’re proud to become a part of this great organization and we look forward to doing our part to make the Spirits family proud.”

The Spirits take the field again on Tuesday, March 28 at 7:30 pm versus the Indians at Carpenter Park, Field 8 in Plano. Tickets are still available. 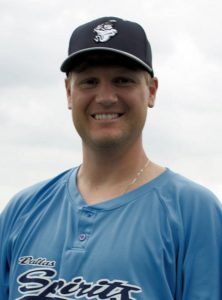