(August 18, 2022 – Plano, TX) Well, it was more of the same Monday night with the Dallas Cardinals levying ownership over the Dallas Spirits. The Cardinals rolled past the Spirits by a score of 8 2 to, increasing their 2022 record to 4-0 against the ghosts and moving into the NTABL Masters League Championship game.

The good news is that the Spirits season isn’t over. They’ll move to the loser’s bracket of the league round-robin tournament to face the Rattlers for a chance at working for a championship. Should the team win, they’ll need to beat the Cardinals twice to claim walnut and bronze.

The Cardinals pulled some “cards” out on Monday night, showing up with former AA pitcher, Colin Young who has spent the past couple of seasons as a pitching coach with the San Diego Padres. Young looked solid, bringing heat and a mix of pitches that the Spirits didn’t seem to find a way to hit fair. The bats found the ball, but sent the ball to fair territory very few times.

The Cardinals, on the other hand started quickly by picking up 2 runs in the first and adding 5 more in the third to essentially seal the game. Shawn Lee broke the ice after Troy Key came in to replace Young after Young left the game with a sore hamstring. Lee reached on a leadoff single and was quickly squeezed at second after Will Nash reached on a fielder’s choice. Sean House followed with a deep single that allowed Nash to score and the Spirits were on the board finally before Brian Hackney grounded into a double play to end the inning.

The Cardinals eventually added run number 8 and the Spirits added a second run to get the game’s final score after Earl German led the sixth off with a single. He was forced out at second after David Tipton reached on a fielder’s choice, and later moved to second after Lester Bedford singled. Both runners advanced on a wild pitch, and Tipton later scored on a ground out by Chris Allen.

Lee, House, German, and Bedford were the only Spirits to collect hits on the night while Jerry “the Spirits killer” Anderson reaped with a 3-for-3 performance that included a double, 2 RBIs, and 3 runs scored. Jerry Gamez finished with a pair of hits and an RBI for the Cardinals as well. Young picks up the win in 3 and 1/3 innings of work, walking 3, and striking out 4.

The Spirits will host the Rattlers at Graham Field with a 7:00PM first pitch on Thursday night. Click here for schedule details. 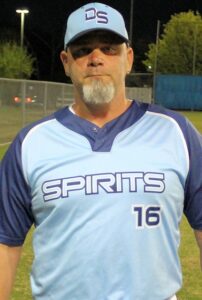 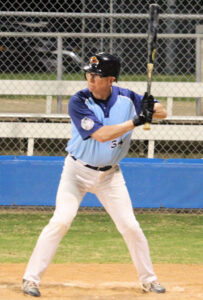