(July 28, 2018 – Plano, TX) A late game offensive surge by the Spirits (35+) squad pushed them into a virtual tie with the Thunderbirds atop the NTABL Veterans League standings following an 11 to 6 victory over the Astros Thursday night. A 3-run fourth and fifth inning was enough to break a 4-4 tie and give the phantasms their second victory over the Astros this season.

Jonathan Duran, John Showalter, and Eric McPherson led the Spirits each with a pair of RBIs, with McPherson and Jason Bottenfield each adding a pair of singles as well. Cliff Brade and Patrick Bilgere rounded out the box score by each adding a double. On the Astros side of the box, Aaron Lowe was large and in charge, belting a 3-run home run after carrying his squad with 2 hits total, a walk, and 5 RBIs.

The Spirits picked up 2 quick runs in the first after Bottenfield reached on a one-out single and was pushed to third after Kirk Sipila singled. Bottenfield was able to score on a wild pitch from Astros hurler, Chris Brooks. Sipila was able to advance to second on the pitch and Travis Hitzeman reached on a walk. Sipila would later advance on a passed ball and Hitzeman followed by stealing second to put 2 runners in scoring position. John Mahalik scored Sipila to make it 2 to 0 with a sacrifice fly to center and Brooks got out of the inning after striking out Shawn Lee.

The Astros rallied with a run in the bottom half of the first when Clint Harris led off by drawing a base-on-balls off of Spirits starter, Brant Finchum. Kevin Hull flew out and Lowe drew a walk to put runners on first and second. The Spirits looked to turn two after Trent Feekner grounded to short and Hitzeman delivered to Bottenfield at second to force out Lowe. Bottenfield’s relay to first was off the mark and allowed Harris to score to cut the lead, 2 to 1.

The Spirits added 2 additional runs in the second after Bilgere led the inning off with a double down the left field line. Finchum followed by reaching on an error but was squeezed on the next play after Showalter replaced him at first after surviving a fielder’s choice that also pushed Bilgere to third. Duran grounded out to the second baseman during the next at-bat and Bilgere was able to score to make it 3 to 1, Spirits. Showalter eventually made his way to third after a wild pitch from Brooks and an RBI single from McPherson made it 4 to 1, Spirits.

The teams returned scoreless half-innings during the next two frames and it was the Astros that struck pay dirt in the bottom half of the third. Harris reached with one out after another error by the Spirits infield and Hull singled to put two on with one out. Enter Lowe’s big bat…Lowe took a 2-1 pitch from Finchum through the incoming wind and left a dent in the right field scoreboard and just like that, the game was tied at 4 following the 3-run blast. Finchum recovered and was able to get Landon Newton to line out and killed the rally by getting Marcos Vidal to ground out.

The Spirits recaptured the lead after Lee reached on a one-out error in the fourth. Lee stole second and advanced to third after Bilgere also reached on an error. Bilgere stole second to put runners on second and third, and a single by Showalter scored both runners and gave the Spirits a 6 to 4 advantage. Showalter advanced to second on the throw to the plate and scored moments later following an RBI single by Duran.

Finchum retired three in a row after giving up a walk to Dan Zier in the bottom half of the fourth and the Spirits opened it up by adding 3 additional runs in the fifth. Brade doubled and then reached third after David Tipton grounded to short and reached on a fielder’s choice when the Astros shortstop attempted to cut down Brade at third. Brade slid under the tag at third and the ball made its way toward the Astros dugout, allowing Brade to score. Tipton was able to take second on the fielding error and later took third on another wild pitch from Brooks. Bottenfield followed up with an RBI single to score Tipton and the Spirits led, 9 to 4. Sipila drew a walk and Hitzeman was out due to an infield fly. Mahalik drew a walk to load the bases and Bottenfield was able to score on a sacrifice fly ball hit by Lee and the Spirits led 10 to 4 after four and a half complete.

Hitzeman replaced Finchum on the mound in the bottom half of the inning and the Astros rallied for a pair of runs against the Spirits’ big and tall pitcher. Harris singled and Hull drew a walk and both runners eventually advanced on a wild pitch. Lowe took advantage of the quick start in the inning and scored both runners on a single to right field, but Hitzeman refocused and was able to retire the next three Astros hitters.

The Spirits closed out the scoring in the sixth after Finchum led off with a base-on-balls and eventually made his way to third following a pair of wild pitches by Lowe, who replaced Brooks as the Astros pitcher. McPherson picked up his second RBI on the evening with a single to score Finchum and the Spirits went on to win with the 11 to 6 score.

The win boots the Spirits record to 8-2, and leaves them in a virtual tie with the Thunderbirds (8-2-1) atop the Veterans League standings. The Spirits return to action next Thursday as they host the Dallas Cardinals at Graham Field starting at 6:30PM. Click here for schedule details, to obtain driving directions to the game, or to download the iScore Central app to watch and listen to the game live, online! 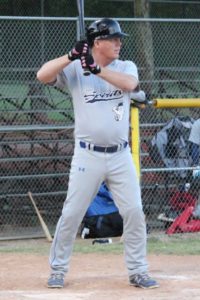