Spirits (35+) Hang with Modoc But Lose Close One

(August 27, 2020 – Carrollton, TX) The Spirits (35+) squad once again was able to hang with NTABL Veterans League leader Modoc this past Thursday night but they didn’t have enough in the tank to get over the edge. After tying Modoc earlier in the season, the Spirits proved that they have the ability to contend with the top half of the league but they unfortunately didn’t get over the edge in the most recent match-up, falling 4 to 3 at McInnish Park in Carrollton.

Solid pitching by Modoc starter, Adam Gremillion proved to be the difference as he struck out 16 Spirits on the night on his way to a complete game victory. The Spirits took an early lead in the first inning after Eric McPherson drew a one-out walk and advanced to second on a wild pitch. Kirk Sipila flew out to leave one on with two outs, but McPherson was able to swipe third base and would later score on a double to the left field wall by Travis Hitzeman. Shawn Lee reached on a dropped third strike to put runners at the corners, but Chris Lewis became Gremillion’s third strike out victim to end the inning.

Modoc went in order in the bottom half of the inning as Spirits starter, Jonathan Duran also had a solid game going the distance allowing 3 earned on 8 hits while walking 2 and striking out 1. The game remained quiet with the Spirits clinging to a 1 to 0 lead until the bottom half of the fourth inning when Modoc picked up a pair of runs following back-to-back singles by David Lovell and Matt Garrabrants with Lovell scoring on the deep single by Garrabrants. Garrabrants was able to swipe second base and later scored after advancing to third on a Spirits error and a ground out from Chris Clark.

The Spirits rallied however, earning another two runs in the fifth inning after Duane Aponte singled. Brian Hackney and Duran both went down swinging, but Aponte went on to steal second and Cliff Brade reached on a dropped third strike. McPherson then reached on a Modoc error that allowed Aponte to score and the inning remained alive following an RBI single by Sipila that allowed Brade to cross the dish and to give the Spirits a 3 to 2 edge. Hitzeman kept the inning moving after reaching on an error but Lee went down on swings for the second time to end the rally.

The lead was short lived however as Modoc returned with a pair of runs in the bottom half of the inning after Gremillion led off with a single and advanced to second on a ground out from Bill Kelly. Jay Langston drew a walk and after Jerry Anderson flew out, the Spirits were poised to get out of the inning but Lovell followed with a 0-2 single that was good enough to score both runners who previously advanced on a passed ball and stolen base. Duran was able to get Garrabrants to line out to end the inning but the Spirits weren’t able to find life in the top half of the sixth and eventually ran out of time due to the league’s two-hour game time limit.

“We put up a decent fight, but once again we end up on the short end,” Lee commented following the game. “We had opportunities and missed them but the calls both offenses were getting at the plate tonight didn’t help anyone. I think Modoc would agree. Each team literally had a different strike zone and its nothing any of us could make sense of. But mental errors and great pitching shut us down. They were the better team tonight, they picked up the win. Gremillion was lights out and Duran pitched a hell of a game for us as well. We missed an easy double-play that would have saved us a pair of runs and a number of us couldn’t catch up to their pitching, self included. But I think we can play with some of these teams, but we’re running out of time to prove it. I’d like to see us get some momentum heading into the post-season. We gotta find it somewhere.”

The Spirits return to action on Monday as they host the Dallas Mustangs at Graham Field starting at 6:30PM. Click here for schedule details. 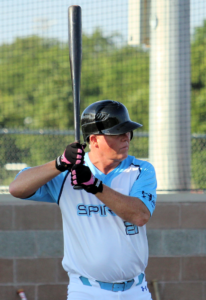