(May 17, 2018 – Dallas, TX) For once, the gale forced winds of Texas weren’t blowing in to home plate during a baseball game in North Texas. Unfortunately, that didn’t appear to have any affect on Spirits (35+) bats as the team was able to muster only a single hit against the Dallas Cardinals Monday night at Reverchon Park in Uptown, Dallas. The positive side of the story? The ghosts were still able to find a way to win, using a combination of timely walks, solid base running, and a lone hit that proved to take them into victory lane.

Jason Bottenfield took the mound for the Spirits and delivered a solid game of pitching against a team known for some great hitting. Bottenfield scattered 8 hits over 6 innings of work, allowing 3 earned runs, while walking none and striking out 5. Bottenfield can also thank his defense as the Spirits fielders played solid giving up no errors on the night.

Cliff Brade started off the scoring in the first after he reached first when Cardinals starter, Phillip Bosco hit him in the back with a pitch. Brade, a speed demon that swiped 50 bags between the Spirits (18+) and Spirits (35+) a year ago was clearly on the mind of Bosco as he made two quick pick-off attempts to first. Bosco then appeared to be shaky after retaking the rubber and muffled his move resulting in a balk that sent Brade to second. Brade then stole third base, and before Bottenfield was able to draw a walk during the next at bat, Brade crossed home on a passed ball that gave the Spirits a 1 to 0 lead. Bosco was able to strike out Brant Finchum and then followed with another base on balls to John Mahlik, giving the Spirits two on with one out. Chris Lewis was unable to take advantage after going down on swings and Shawn Lee’s hard grounder found the glove of the Cardinals third baseman and the inning was over.

The Cardinals quickly made it 2 to 1 in the bottom half of the first after Kevin Fought led things off with a single and then scored after Joe Lowry doubled off the next pitch from Bottenfield. Bosco followed with another double to score Lowry, giving the Cardinals the lead after one complete.

Cardinals manager, Jason Gutierrez turned to hard-throwing, Brian Underhill to pitch against the Spirits in the top half of the third and Underhill was able to set the Spirits in order, including a pair of strikeouts to John Showalter and Jonathan Duran. Despite a single by Bosco in the bottom half the inning, Bottenfield retired three out of four and the game remained to 2 to 1, Cardinals after three innings.

Enter once again, Cliff Brade. Brade was able to draw another base on balls and following three pick off attempts at first from Underhill, he was able to swipe second. Brade appeared fired up to run as he was then able to steal third after Bottenfield drew a 1-2 count. Bottenfield followed up with a line drive to left field that was deep enough to score Brade for the sacrifice fly and the game was tied at 2. Despite 3 straight walks from Underhilll to Finchum, Lewis, and Lee, and what appeared should have been 4 straight walks after a blown called third strike to Mahalik, the Spirits had bases loaded with two out. Patrick Bilgere then took the batter’s box and drilled a line drive down the right field line that just missed the chalk. Bilgere subsequently flew out to the right side and the rally was ended, but not before the Spirits were able to break even.

Bottenfield held the Cardinals scoreless in the bottom half of the fourth and the Spirits again made some noise by loading the bases after Kirk Sipila reached on a dropped third strike and Eric McPherson and Showalter drew walks. Underhill was able to get Duran to ground out and the game remained tied at 2. Bottenfield set the birds down in order to complete the fifth and opportunity presented itself for the Spirits in the top half of the sixth.

Earl German was able to reach on an error after the Cardinals center fielder dropped a fly ball. German made an unusually large turn around first and Underhill was able to sneak behind and German was thrown out easily. Brade then reached on another error by the Cardinals and Bottenfield was hit by Underhill to put two on with one out. Underhill rebounded to get Finchum on a fly out and with two out, Mahalik was internationally walked. Lewis was next for the hero opportunity and it appeared the rally ended as fast as it started as Lewis stuck a slow roller that barely made its way back to Underhill on the mound. The Cardinals pitcher took two steps, picked up the ball and then strangely, decided to underhand it to first from about 40 feet away. The ball fell short, hitting the bag at first and Lewis, who ran like he was trying to beat out an infield single was safe. Brade was able to score on the error and the Spirits had a 3 to 2 lead.

Next up, Shawn Lee…Lee, who had turned back to the dugout thinking the inning was over, returned to the box with new life. He took ball one from Underhill and proceeded to send the next pitch between short and third for the Spirits only hit of the game, scoring both Bottenfield and Mahalik to give the Spirits a 5 to 2 lead. Lee followed by stealing second and Bilgere drew a four-pitch walk to once again load the bases. Lewis was able to cross the plate on a wild pitch from Underhill and the Spirits led 6 to 3 before Sipila grounded out to end the rally.

“Not really sure what to say about that one,” commented Lee after the game. “When opportunity strikes, you take it I guess. All I can say is props to (Chris) Lewis for running out that little squibber he hit. He was done. Out by a mile. But he didn’t pout, he didn’t turn and walk to the dugout, but rather sprinted to first like he needed that hit to win the World Series. I’m telling you man, it got us fired up. Hats off to him for being disciplined enough to do that. A lot of guys in this league, and to be fair, on this team wouldn’t have given that the same effort. The error was catastrophic and we took advantage of it. He (Underhill) threw me a fastball on the inside corner and I was able to make some solid contact for a hit and thankfully we had Jason (Bottenfield) and John (Mahalik) running hard to give us the insurance. Turns out we needed it. Great effort by the guys even though we were being no-hit up to that point.”

Bottenfield was able to strike out Lowry to get the first out in the bottom half of the sixth, but then hit Bosco to put one on with one out. Guy Koenig followed with a single and Bottenfield then hit Dustin Harrison with a pitch and the bases were loaded for the Cardinals. Mark Carrasco flew out to Finchum at second base for the second out of the inning and a single by Mark Tierny made it 6 to 3. Bottenfield remained poised and was able to strike out Rusty Holmes to seal the victory as the game reached its two hour time limit.

“Happy to get a W tonight,” continued Lee. “Solid effort from Jason tonight and we’re thankful to get a win against a solid team like the Cardinals.”

The win moves the Spirits (35+) record to 3-1, tied for second in the NTABL Veterans League standings, one half game behind the Thunderbirds (4-1). The team returns to action next Thursday night as they host the Royals Baseball Club at Texas Air Hogs Stadium in Grand Prairie, TX. Click here for schedule details, directions to the game, or to download the iScore Central app to watch and listen to the game. 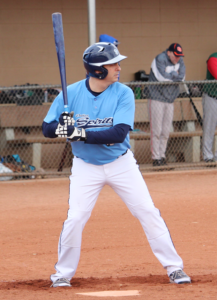 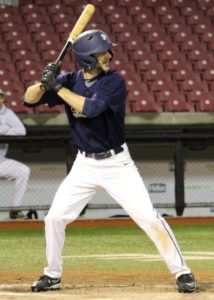