(August 2, 2018 – Dallas, TX) Opportunity was available for the Spirits (35+) squad in NTABL Veterans League play and the team did everything but seize that opportunity as they gave way to the Dodgers by a score of 5 to 4 Thursday night. It’s the second time this season the squad has fallen to a team near the bottom of the standings and it shows that any team in the league will be more than happy to take a win from you if you’re not prepared to play.

The team was able to score the 4 runs after mustering only 5 hits on the night from a solid effort by Dodgers pitcher, Wes Kirby, but far from blowout pitching and defense they’ve faced all season.

“I’d honestly prefer not to have a comment on tonight’s game,” muttered manager, Shawn Lee following his team’s loss. “We played like scrubs tonight. We didn’t put out an effort that says, yeah we’re returning champs and we’re making a statement tonight. I think we thought we’d coast and hopefully tonight is a bit of a wake up call. Yes, anyone in this league can beat you. With teams playing well including the Cardinals and Modoc, we best wake up and be ready to play when we take the field. We need guys to step up, myself included, and we need to start taking advantage when opportunity presents itself.”

Things appeared to start off normally as the Spirits jumped out to a 2 to 0 lead in the first inning after Cliff Brade led things off with a single. Jason Bottenfield popped out to the infield to leave one on with one out. Brade stole second to put himself in scoring position and Kirk Sipila followed by patiently drawing a walk. Both runners advanced on a wild pitch from Kirby and Brade was able to score on another wild pitch to give the Spirits their first run. Patrick Bilgere went down swinging but was able to reach safely as the pitch got passed the Dodgers catcher. The drop allowed Sipila to advance to third and Bilgere would eventually take second. Brant Finchum also went down on swings and again, the third strike was dropped which allowed Sipila to score, but Finchum was thrown out at first. Lee then popped up to end the inning.

The Spirits made it 3 to 0 in the second after Eric McPherson reached on a one out single. Chris Lewis went down on strikes and McPherson eventually stole second before Jonathan Duran scored him on an RBI single.

The Dodgers quickly made it a game in the third after Clayton Shafer led off with a single off of Spirits pitcher, John Showalter. Showalter, the Spirits starting third baseman was a quick fix for a number of players who were late getting to the game. Showalter had delivered some magic as a pitcher in a tournament the team played in Las Vegas, so Lee was confident he could get the job done. Shafer was able to advance to second after a Spirits fielding error and later advanced to third on a passed ball. Joel Slack made it 3 to 1 after singling to score Shafer and later advanced to second after Showalter walked Nick Bird. Sean Rilry flew out with no damage done, but Greg Shiro was able to reach after another Spirits fielding error that was sure to spin two. The blunder allowed Slack to score as well and the lead was cut down, 3 to 2.

The Dodgers tied things in the fourth after the Spirits offense sputtered when Brian Kellner led off with a double. Kirby followed with a single to score him and the game was tied. Showalter was able to retire the next three hitters, but the Spirits went in order during the bottom half of the inning and the game remained tied.

The Dodgers then made it 5 to 3 and all after two outs in the fifth when Bird reached on another Spirits error. Rilry singled to put two on with two out and Shiro made it bases loaded after drawing a walk. Bird was able to score on a wild pitch and a walk to Ronnie Taylor re-loaded the bases. Dee Mauldin then reached on yet another Spirits error and the Dodgers went up 5 to 3 before the Spirits were able to relay a throw to gun down Shiro at third to end the rally.

Kirby was then able to strike out Lewis to start the Spirits fifth, but Duran kept hopes alive with a single. Duran would later advance on a wild pitch and things grew more tense for the Spirits after Brade was struck out looking. Bottenfield followed with a two-out single to put runners at the corners and would later advance to second after Kirby caught the relay from the outfield and then twisted his knee. Kirby had to be replaced on the mound by Joe Venker and with Sipila returning to the plate, the Spirits liked their chances. Sipila delivered with a ground ball deep in the hole. It appeared Sipila was going to have himself an infield single as Duran was able to score easily, however Bottenfield ran through the stop sign at third determined to get to the plate and made it a close play, but the Dodgers shortstop was able to relay home in time to tag Bottenfield out on a bang-bang play that ended the game due to league time constraints.

“I don’t have a problem with Jason (Bottenfield) heading home,” continued Lee. “Sometimes you have to make them make a play and I have a ton of confidence in Jason. What I don’t like is 5 errors during the fourteenth game of the season; or showing up 3 minutes before the game starts. We were passive tonight and we thought we were going to coast. I hope it wakes a few of us up.”

The loss drops the team’s record to 10-4, just over a game out of first behind the Dallas Cardinals who won their game over the Thunderbirds and sit atop the league at 10-2-1. The Spirits will return to action next Thursday night where they will once again host the Dodgers, this time at McInnish Park, Field #10 with a 6:45PM first pitch. Click here for schedule details, to obtain driving directions, or to watch and listen to the game live, online. 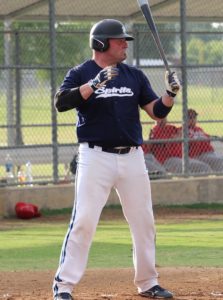