(July 9, 2022 – Irving, TX) You had one job. Show up. Due to an issue with attendance, the Spirits (50+) squad faced off against the league’s number one seeded White Sox on Saturday and it wasn’t just hot temperatures that had the team sweating. With a pair of players pulling out last minute, the team was forced to play with 8 players on defense and it cost them nearly immediately.

Call it a warm-up inning, but the team staved off a single ruin in the first inning but quickly saw a close game dimmish by a touchdown after the White Sox lit up the scoreboard for 6 runs in the second and a pair of three-run innings later in the game to coast to a 14 to 7 win.

It wasn’t from lack of effort. The 8 players that showed up battled and as a consequence of way too much open field, pitcher John Holmquist to a hit to his statistics as the White Sox ended with 20 hits on the day, boosting their stats and earning smiles throughout the seven inning affair.

Brian Hackney led the Spirits offense with 3 hits on the day, adding a run scored and an RBI. Shawn Lee added two hits, a walk, run scored, stolen base, and an RBI, and Mike Sopocy added a pair of hits, including a double, run scored, and 2 runs batted in.

The team will host the Diablos next week for their season finale. 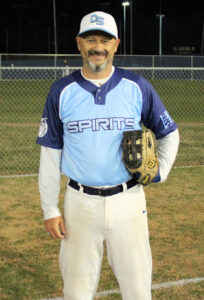