(March 7, 2022 – Plano, TX) It was game one for the NTABL Masters League Champions as the Spirits (45+) took to the diamond to face off against the newly formed Thunderbirds version of 45 baseball. Seems the ghosts picked up where they had left off last season, with bats swinging and shaky defense that still seemed to get enough done for a victory.

It was the Thunderbirds who drew first blood, however. Facing off against Spirits starter, Earl German, the birds got off to an early start after Rob Shollar led off the game with a single. The success didn’t last long however, as Shollar’s infield pop-up that dropped behind German on the mound was then handled Kirk Sipila who was playing second. It turns out, Shollar didn’t watch the ball. After making contact, he ran to first, looked up, and then turned back to the dugout after he saw the Spirits infield throwing the ball around. Sipila, who had picked up the ball was simply returning it to German for the next hitter. Shollar, stepped off of first and began walking back to the dugout thinking the ball had been caught. The Spirits then threw over to first and Shollar was called out. German then was able to get Paul Dominguez to ground out and it seemed the Spirits may get out of an easy but unusual inning. Enter, the Spirits defense. Robbie Martinez followed by reaching on a Spirits fielding error and a walk to James Hardt put two on with two out. The Spirits then kicked the ball around a second time after allowing Marc Coll to reach and Martinez was able to score to give the Thunderbirds a 1 to 0 unearned lead before German was able to get Harvey Carlisle to fly out.

Redemption came in the form of offense as Eric McPherson started off the season 1-for-1 after reaching on a single. McPherson swiped second and later scored after Sipila reached on a Thunderbirds error. Travis Hitzeman drew a walk and Shawn Lee followed by reaching on a fielder’s choice that ended Hitzeman’s trip around the bags at second. With Lee on first and Sipila on third, a single by newcomer, Mike Sopocy scored both runners after Lee had initially swiped second and then made his way to the dish to give the Spirits a 3 to 1 advantage before Brian Hackney grounded into an inning-ending double-play.

Phil Luna led the Thunderbirds second with a single, but German set the remaining hitters in order to hold up the same score. The Spirits then tacked on another run in the second after additional newcomer, Chris Allen reached on a one-out single. German walked, and after Brant Finchum lost a battle at the plate on swings, Allen was able to score after John Holmquist reached on an error by Thunderbirds pitcher, James Hardt. McPherson grounded out to close inning number two but the Spirits held a 4 to 1 lead.

A pair of two-out walks and a fielding error made things interesting for German and the Spirits defense in the third but the ghosts ignored being pulled into a new dimension after German was able to get Coll to fly out to close the top half of the inning without any scoring. The Thunderbirds then turned to Robbie Martinez in the bottom half of the frame to face the Spirits cruising offense, and the offense greeted him with another 6 runs. Sipila led off with a single and scored after Hitzeman hit an RBI double to the wall. Lee then scored Hitzeman after crushing a triple to the left center field wall to make it, 6 to 1. Sopocy singled to pick up his third run batted in after Lee scored, and Hackney reached on a fielding error to move Sopocy to second. Will Nash followed by reaching on an error that squeezed Hackney at second and pushed Sopocy to third, and after Nash swiped second, both runners made their way home after Allen reached on another Thunderbirds error. Allen went on to steal second and moved to third when German grounded out. Allen later scored on an RBI single from Finchum making it 10 to 1, Spirits before Holmquist lined out to end the inning.

Scoring remained quite nearly rest of the way until the Spirits added run number 11 after Sipila led the inning off with a single and moved to second when Hitzeman reached on an error. The error allowed SIpila to take third and he later scored after Lee picked up his second RBI and hit on the night with a single. The Thunderbirds picked up their final run in the top half of the fifth inning after Dominguez reached on an error with two outs. He later scored on a double by Martinez before Sipila, who relieved German on the hill, struck out Hardt to end the inning.

The Spirits offense returned to the plate but time expired due to the league’s two-hour game time limit rule. In the end, it was an 11 to 2 victory for the Spirits.

“Solid start for us again offensively,” Lee commented after the game. “We were fighting the cold a bit tonight, so it’s hard to get the old bodies moving. But the bats were swinging and finding holes. Both teams are still fresh on the season, so the errors are going to happen. Just seems they leaned more in our favor this evening. Great start for our newcomers tonight. Mike (Sopocy) played with and added 3 runs batted in for us tonight and CA (Chris Allen) is always going to be helpful no matter where you put him both offensively and defensively. I’m sure the game will be tighter the next time we see them, but we’ll take the win and try to get better.”

The Spirits (45+) squad gets back after it in two weeks, as they’ll be away next Monday as the visit the MSBL Las Vegas Kickoff Classic tournament. Click here for next game details and be sure to download the iScore Central app to watch and listen online! 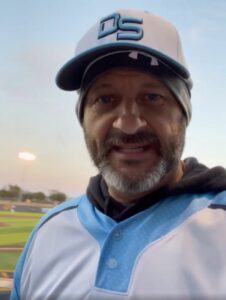