Lackluster Offense Costs Spirits (35+) in Close One with Dodgers

(September 17, 2020 – Plano, TX) Both pitchers had enough stuff to make it a complete game, but only one of the two came out with a win Thursday night and that was in the form of Dodgers starting pitcher, Kevin Simmons. Simmons allowed just 6 Spirits hits and 3 earned as he went on to fan 3 and also walk 3 as his Dodgers slipped past the Spirits (35+) squad by a score of 9 to 8 on Graham Field.

Spirits starter, Jonathan Duran did all he could to help his team win, allowing 8 runs on 12 hits while only walking one and striking out 5, but the team’s offensive struggles continued in NTABL Veterans League action as only 3 Spirits batters were able to hit safely to help carry the Spirits offense which as been on life support most of the season. The Spirits 3, 4 and 5 hitters accounted for all 6 hits and most of the runs in an effort that came close, but unfortunately fell short at the end. 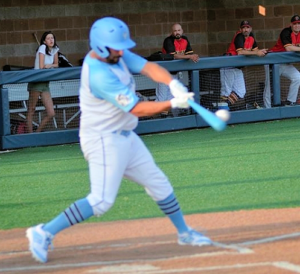 Shawn Lee finished the night with a pair of hits including a triple, a run scored, 4 RBIs and 3 stolen bases. The Spirits fell to the Dodgers by a score of 9 to 8.

After Duran and company set the Dodgers in order in the first, the Spirits offense opened up for 3 runs after Cliff Brade reached on an error and then stole second base. Eric McPherson reached on another Dodgers error that allowed Brade to advance to third. McPherson swiped second to put both runners in scoring position and Kirk Sipila flew out but not deep enough to score a run. Shawn Lee then followed by taking a 1-1 pitch to the left-center field wall for a triple allowing both runners to score and to give the Spirits a 2 to 0 lead. Brian Hackney then reached on an error that allowed Lee to score and the Spirits had a 3 to 0 lead before David Tipton and Shawn Hunt both grounded out to end the Spirits hot start.

The Dodgers were able to get on the board in the second after John Kirby drew a walk and then later scored on an RBI double by Patrick Richer. Despite a lead off walk by Brant Finchum in the bottom half of the inning, the remaining Spirits went in order and after 2 complete, the Spirits held a 3 to 1 advantage.

In the top half of the third inning, it became that inning the Spirits typically fear once per game and this time it came in the form of 5 runs by the Dodgers. Jeff Hamm led the inning off with a single and even though the Spirits were able to get Simmons to line out and then Eric Landsberger to fly out, the Dodgers rallied for nearly a half dozen runs with 5 straight singles by Joe Venker, Brad Kempson, Brian Kellner, Kirby and Richter and just like that it was 6 to 3, Dodgers.

“Our offense was looking good tonight outside a slow start defensively,” commented Dodgers skipper, Kevin Simmons. “I was fortunate that I was keeping the ball close against their hitters and able to slow them down for the most part despite our defensive struggles on the field. I felt that after the third inning we were starting to take control of the game.”

The Spirits were able to bounce back in the bottom half of the third after Sipila reached on a one-out walk and later scored when Hackney reached on an error. The Spirits were able to hold the Dodgers to a pair of base runners in the fourth and then followed through with another pair of runs to cut the lead down to 6 to 5. Hunt went down swinging to start the inning but Finchum was able to reach on another Dodgers error. After swiping second base, Finchum made his way to third after John Hefner reached on yet another Dodgers fielding error and after Hefner went on to swipe second to put both runners in scoring position, Duran was able to score Finchum on a sacrifice fly to make it a one run ball game.

Duran was able to set the Dodgers in order in the fifth and after Sipila blasted a one-out triple to the right field wall, he was able to score when Lee grounded out in the middle of the infield. Hackney kept the inning alive with a single and after Lee swiped second base while running for him to get into scoring position, Simmons was able to fan Tipton to get out of the inning.

The game remained tied until the seventh inning and that’s when the Dodgers opened up for 3 more runs to take what appeared to be a commanding lead as the game was winding down. Simmons and Landsberger both singled to start the inning but Duran was able to get Venker on strikes to hold the runners. A wild pitch didn’t help the Spirits chances as both runners advanced to scoring position and Kempson capitalized on the mistake with a 2-run single to give the Dodgers an 8 to 6 lead. Kempson advanced to second on another wild pitch and was able to make his way to third after Kellner grounded out and before the Spirits could dodge another run, John Kirby followed with an RBI double to make it 9 to 6, Dodgers.

“Heading into the seventh, I wasn’t sure of our chances,”Lee commented. “We were struggling from the plate but we had the bottom and the top on the way up to the plate so we were eager to see if we could make some noise. Good news is that we were able to make some noise, but we just didn’t make enough.”

Duran led things off with a walk and the Spirits had their lead runner aboard. Brade follwoed by trading places with Duran after he reached on a fielder’s choice that squeezed Duran at second and he want on to swipe second. McPherson flew out and just like that the Spirits had 2 down in the game’s final inning down 3 runs. But Sipila was able to keep the inning alive after he singled to put runners on the corners. Lee followed with a single up the middle to score Brade and another single by Hackney provided hope as Sipila scored and Lee moved to second. Both runners advanced on a wild pitch and the story appeared to be scripted for Tipton, but it wasn’t meant to be as he flew out to end the game.

“Tough one to lose but I’m glad we were in it,” continued Lee. “Dodgers always give us a solid game and it’s usually a pretty good time to battle against them. Great job by Hack and Sipila tonight. I was fortunate to find hits at the right time to contribute as well and I thought for the most part, Duran was pretty solid. Playoffs are right around the corner and it’ll be a new season. Hopefully our bats show up for good one of these days soon.”

The Spirits will play their final regular season game next Thursday night before playoffs begin. Their opponent will be the Mustangs at McInnish Park, Field #11 starting at 6:30PM. Click here for schedule details or to download the iScore Central app to listen to Spirits games live online.