(August 16, 2021 – Plano, TX) It was a slow start and a bit of a deficit to come from behind to, but the Spirits (45+) offense was able to get its act together and come from behind to take down a solid hitting Royals team Monday night on Graham Field in NTABL Masters League action.

The Spirits offense sputtered most of the game against Royals pitcher, David Davis and it nearly cost them before the game ended. Spirits starter, John Holmquist was solid and awaiting offensive life to show up as he allowed just 1 earned run to cross the dish, while allowing 6 hits, walking one, and striking out 7 to pick up the complete-game victory.

In the first inning, Kevin Simmons reached on a one-out fielding error by the ghosts and two pitches later, he swiped second to give the Royals a runner in scoring position. Rich Beller then reached on another Spirits fielding error that allowed Simmons to score and the Royals had a 1 to 0 lead early, before Michael Dossey reached on a fielder’s choice that squeezed Beller at second. Robbie Martinez followed with a single but Holmquist was able to get Harvey Carlisle to ground out to end the Royals half of the inning.

Brant Finchum flew out to start the Spirits half of the inning, but Kirk Sipila patiently drew a base-on-balls and a single by Travis Hitzeman put runners on the corners. Shawn Lee walked to load the bases, but the Spirits offense we held up after Brian Hackney popped-out to the infield leaving bases loaded with two down. David Tipton then battled a 7-pitch walk that allowed Sipila to score and tied the game at, 1 to 1, but Earl German grounded out to end the inning.

The game remained tied until the third inning after the Royals took a 2 to 1 advantage when Robert Trevino, Jr. walked after Alex Benitez went down looking. Marcos Vidal singled to push Trevino to second and both runners took off on the following pitch. Trevino was safe at third and was then able to score after Finchum made an errant throw to try to gun down the stealing runner. Holmquist was able to get out of the inning after striking out Simmons and Beller looking to stave off any additional scoring. In the bottom half of the inning, Sipila start things off with a single. Hitzeman flew out, but Lee singled to move Sipila to second, however Hackney again revisited the infield fly rule and Tipton grounded out to hold off any scoring by the ghosts.

Holmquist continued with his pitching magic, picking up a number of strikeouts along the way and the Spirits were finally able to break the offensive seal with the same 2 to 1 score in the bottom half of the sixth after Tipton started things off with a single. German drew a walk and a great sacrifice bunt by Holmquist moved both runners over. Tipton was able to score on the play after the relay to first was simply too slow to react to him moving on the play and then rounding and racing home. Mino Hafsli reached on a fielder’s choice that caught German out at third, but Finchum kept the inning alive by drawing another walk. Sipila followed with a double that scored Hafsli and two pitches later, Finchum scored after a pitch hit the turf and got by the Royals catcher. Hitzeman then followed with an RBI double to score Sipila and before Lee flew out to end the inning, the Spirits had a comfortable 5 to 2 lead heading into the game’s final inning.

The Royals remained poised heading into the final inning of play and signs of life showed instantly after Beller led off with a double. He would then score on an RBI single by Dossey to cut it to, 5 to 3, but Holmquist rallied and caught Martinez looking to record his seventh strikeout of the game. Dossey was able to swipe second, but Holmquist was able to get Carlisle to ground out and Steve Smith to fly out to end the game.

“Excellent performance by Big John (Holmquist) tonight,” Lee mentioned following his team’s victory. “He was in solid control all night and offensively, that was the best bunt we’ve seen all year. He’s been on his game all season and there’s a reason why he was voted an all-star. Great job by Sip (Kirk Sipila) at the dish tonight to help carry us in the little bit of offense we found. Royals are a solid ball club, so we’re happy to leave this one with a win.”

The Spirits will return to action next Monday night when they host the Knights on Graham Field starting at 6:30PM. Click here for schedule details or to download the iScore Central app to listen to games live. 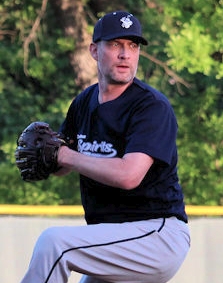