(September 8, 2021 – Euless, TX) The Spirits (40+) Fall squad was in search of offense for game one of the DFW ABA 40+ Fall League season in game one and that offense was found and rolling in game two against the Rangers. Seems whatever is in the water the team is drinking, they best continue that consumption as the ghosts once again put the pedal to the medal and rolled past the Drillers by a score of 13 to 3, Wednesday night at Texas Star.

Travis Hitzeman once again owned the headlines offensively, finishing a perfect 4-for-4, adding 2 runs scored and 2 more batted in. Kirk Sipila was also perfect, 2-for-2, with a walk, 3 runs scored, and 2 RBIs. Every Spirits hitter in the lineup except one hit safely in the game, and all batters reached base safely at least once. Brant Finchum finished 2-for-2 with a walk, and Jonathan Duran, David Tipton, Chris Lewis, and Aaron Wilson all finished with a pair of hits on the night. Lewis and Wilson each added a pair of RBIs and Wilson also scored twice to cap off the high scoring affair.

Scott Swingle led the Drillers with a pair of hits but Duran, the Spirits starting pitcher, was in shutdown mode, going 5 innings of the shortened game due to mercy rule. Duran allowed just 3 runs, 1 earned, on 6 hits, while walking 1 and striking out 4.

The Spirits scoring was often, as the squad scored 2 runs in the first to tie the game at 2 to 2, and then went on a scoring spree throughout the rest of the contest, putting up 6 in the second, 3 more in the fourth, and 2 in the fifth to cap the 13 to 3 win.

The team will return to action next Wednesday night when they visit the first place Redbirds on Legends Field at Texas Star starting at 6:30PM. Click here for schedule details. 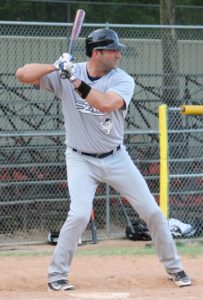