(September 1, 2021 – Euless, TX) Following a beating to start the Fall season opener at the hands of the Red Sox, the Spirits (40+) Fall squad returned the favor to the Rangers on Wednesday night at Texas Star. The Spirits used just 8 hits to put up 15 runs, with the addition of 10 free passes to first that resulted in a 15 to 2 lopsided win in a shortened mercy-rule game in DFWABA Fall 40+ League action.

After setting the Rangers in order to start the game, the Spirits picked up 3 in the bottom half of the inning after Eric Goetz reached on an error. Goetz stole second and after Will Nash flew out, Goetz went on to steal third before walking to the plate following a 2-run home run by Hitzeman. Shawn Lee flew out, but Aaron Wilson kept the inning alive by drawing one of his 3 walks. Wilson later moved to second on a passed ball and then scored after Tipton singled him home. Tipton went on to steal both second and third, but John Hefner flew out to end the inning.

The Spirits held the Rangers scoreless in the second and then proceeded to add a snowman to the box score, picking up 8 additional runs to go up 11 to 0 after just two innings of play. Chris Lewis grounded out, but Duane Aponte and Earl German both singled before Stacy Scott drew a walk. Goetz picked up an easy RBI by also drawing a walk to score Aponte and both Nash and Hitzeman also earned easy RBIs after both were hit by pitches allowing both German and Scott to score. An RBI sacrifice fly by Lee sent Goetz home to score and Wilson’s second base-on-balls loaded the bases again with just one out. Tipton then doubled to score both Nash and Hitzeman, and after Hefner was able to reach on a Rangers error, both Wilson and Tipton scored and the game was essentially out of reach.

The Rangers rallied for a run in the third but the Spirits added insult to injury after scoring 4 more times in the bottom half of the inning when Aponte walked, German was hit by a pitch, and then both Scott and Goetz drew walks. The merry-go-round hesitated momentarily for a more traditional run scoring opportunity as Nash singled to score German who followed Aponte home after the previous walk. Hitzeman flew out to score Scott on the sac fly, and Lee was able to reach on a fielder’s choice that squeezed Goetz at third. Both runners advanced on a passed ball and a third walk to Wilson filled the bags for Tipton. Tipton was then hit by a pitch good to score Nash before the inning ended on a fly out by Hefner.

The Rangers added another run in the fourth to cut the score to, 15 to 2 and that would turn out to be the final result as Aponte, the Spirits starting pitcher was able to stave off any additional runs. Aponte picked up the shortened game win, going 5 innings and allowing just one earned on 6 hits while walking and striking out 3.

The victory puts the Spirits at .500, with a 1-1 record heading into week three of the Fall season. Next Wednesday, they will host the Drillers on Arlington Field at Texas Star. First pitch is scheduled for 8:45PM and you can click here for schedule details. 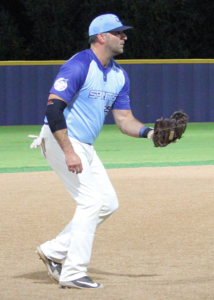 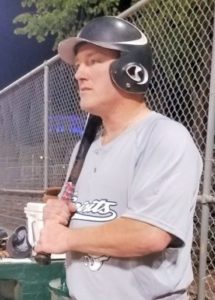