(July 23, 2020 – Carrollton, TX) The unfortunately struggle of finding hits combined with long lineups is proving difficult for the Spirits (35+) as the bats were once again few and far between as the squad fell to the Dallas Cardinals last Thursday night by a score of 7 to 4 in NTABL Veterans League action. The Spirits made the game interesting in the sixth, but the Cardinals avenged a 3-run inning by the ghosts with 2 runs of their own to pull away and seal the victory.

The Spirits finished the night with just 7 hits, compared to 13 by the birds as a sputtering offense continued to be the bi-weekly theme for the team. The Cardinals jumped out to a 3 to 0 lead with three runs in the second and added a fourth run in the third inning to make it 4 to 0.

The Spirits finally got on the scoreboard in the fifth inning after Cliff Brade led off the inning with a single and later stole second base. Kirk Sipila flew out but Travis Hitzeman mustered up a single to push Brade to third. Shawn Lee then singled to score Brade and the Spirits were in the game trailing 4 to 1 before Chris Lewis went down on swings and Lee was squeezed at second when David Tipton grounded out.

The Cardinals then avenged the run in the bottom half of the inning after Joe Lowry led the inning off with a double and then later scored on a single by Jerry Gamez to push the lead to 5 to 1, Cardinals.

The Cardinals then turned to hard-throwing, Scott Clawson to shut down any ideas of a comeback but the Spirits had a little left in the tank to make it a game. In the top half of the sixth inning, Duane Aponte reached on an error and then moved to second after Shawn Hunt wore a pitch from Clawson. Brant Finchum then singled to score Aponte and after Brian Hackney went down swinging, Jonathan Duran singled home Hunt after both runners had moved over on a wild pitch. Grant Martin flew out to leave one on with two outs, but Eric McPherson kept the inning alive after reaching on an error by Gamez that allowed Finchum to score and for the Spirits to cut the lead down to 5 to 4.

Lee turned to Duran to give the Cardinals a different look the third time through their order, but despite getting the first two outs the Cardinals battled back and scored a pair of runs after Mark Tierney singled and Juan Mollinedo doubled. Jason Powell followed with a 2-run double to push the lead back to 7 to 4 before Jason New flew out to end the inning. The Spirits went in order the in the bottom half of the seventh to end the game.

Teirny and Gamez both led the Cardinals with 3 hits each. Finchum, Lee and Duran each finished with a hit and an RBI for the Spirits, with Finchum adding a run scored, while Hackney also added a double to lead the Spirits box.

The team returns to action next week with a same time, same place situation as they will host the Dallas Cardinals at 8:00PM at McInnish Park, Field #11. Click here for schedule details and to find out how you can listen to the game live online! 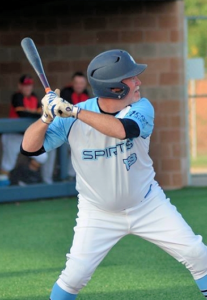 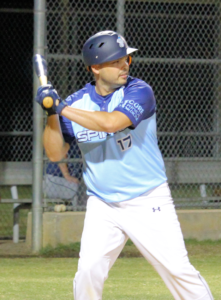