(June 11, 2022 – Carrollton, TX) It wasn’t the nicest of days for baseball. When the temperatures topped 100 and the wind was as hot as the field the Sun was shining on, health started to become a more important topic than any other.

Somehow, the Spirits (50+) squad and the DFW Aces left the games with each of their players still standing, and after the dry field’s dust settled, it was the Spirits walking away with a rather easy and boring, 5 to 0 win.

Earl German with the assistance of an inning of cleanup by John Holmquist, picked up the victory after allowing just 3 hits on the day while walking a pair, and striking out 3. Holmquist closed off the final inning, setting the Aces in order with a strikeout added to his stat listing.

Kirk Sipila, Shawn Lee, Will Nash, and Vince Parello each finished the day with a pair of hits. Lee added a triple and Nash added a stolen base, and that was about the only highlights that stood out in the Spirits box score.

Randy Leach drew a walk off of German to start the game but moments later found himself walking back to the dugout after Eric Reifschneider flew out to right field. Holmquist, playing right at the time, chased down the fly ball and then turned and made a throw on a dime to Brian Hackney at first base to cut down Leach, who had done his job of only going halfway to second. Leach didn’t expect a quick catch and throw, but with a pitcher playing the outfield, he didn’t have much of a chance on getting back.

The Spirits then jumped out to a 1 to 0 lead in the bottom half of the inning after Chris Allen reached on an error and advanced to second on the play. An error allowed him to move to third before Sipila eventually grounded out and allowed him to score.

The Spirits picked up run number 2 in the second inning after Nash and Hackney started off the inning with back-to-back singles. Nash stole third and the bases were loaded after German drew a walk. Parello flew out but not deep enough to record a sacrifice fly, but Holmquist was able to pick up the RBI on a sacrifice fly shortly thereafter. Allen drew a walk to reload the bases, but Eric McPherson flew out to end the inning with 3 left on.

Sipila singled in the third and scored on an RBI triple by Lee to make it 3 to 0, ghosts, and the squad scored again in the fifth after Allen walked to lead off the inning. McPherson reached on an error and an RBI single by Sipila scored Allen to make it 4 to 0, Spirits. Lee reached on a fielder’s choice that squeezed McPherson at third, and Mike Sopocy followed with a fly out, but Will Nash kept the scoring alive with an RIB single to score Sipila to give the game its final score.

The team returns to action next Saturday when they face an opportunity for revenge against the rival Redbirds. First pitch is slated for 9:00AM at McInnish Park, Field #10. Click here to view more schedule details. 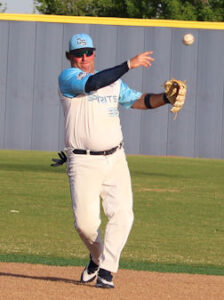