(April 1, 2018 – Dallas, TX) After a brief stint and second place finish at the MSBL Las Vegas Kickoff Classic, the Dallas Spirits Baseball Club and each of its squads are ready for baseball in Texas. Games officially begin tomorrow, April 2, with the Masters (45+) team taking the field to host the Hurricanes Baseball Club.

A few changes are in store along with a few new faces, but the goals remain the same for the ghosts, who captured 3 out of the 5 possible crowns in NTABL league play during the 2017 campaign, including the Open American (18+), Veterans (35+), and Fall (Brazos) League titles.

“We’re excited about this year just like any year,” commented club manager and team president, Shawn Lee. “We’ve seen a few pluses and minuses and that’s typical for each season, but for the most part we bring a lot of key ingredients back to the table on all levels. The guys are excited to play some baseball and we’re looking forward to the challenge of defending our title. Each of our teams has our work cut out for them as there are solid teams in this league, so nothing will be easy.”

The only major change the Spirits will see this season starts with the Open (18+) squad. Manager, John Showalter and his squad have moved to the Open National League in NTABL play, and the Dallas Blue Jays, formerly the Nationals have been king of the hill for some time. Showalter’s squad returns with most of their starters and pick up Veterans (35+) All-Star, Team MVP winner, and NTABL Pitching Award winner, Craig Molldrem to add to an already solid pitching staff. Molldrem will see time on both the Open (18+) and Veterans (35+) squads as will returning Open American NTABL Pitching Award winner, Duane Aponte. To add to a pitching staff that already appears stacked with additional arms including former Astros draft pick, Kyle Redinger, the squad also returns Teddy Croft and Teddy Turner alongside newcomer, Holden Novak who will add some additional punch from the mound.

The Veterans (35+) squad brings back its foundation of players including Lee, Patrick Bilgere, Kirk Sipila, Brant Finchum, Eric McPherson, Chris Lewis, and a supporting cast that is helping to mold the team into one of the best in Dallas. Veteran left-handed pitcher, Earl German will have an increased role in the team’s pitching rotation and newcomers Sergio Lucas and David Hos will provide additional depth. The Spirits look forward to a speedy set of outfielders that get it done both offensively and defensively in David Tipton and Clifford Brade, and the return of Showalter at third combined with the return of McPherson will give the ghosts increased depth within the infield. In addition to those veteran players, Jason Bottenfield, Travis Hitzeman, and John Mahalik will provide offensive punch and additional pitching options that will give the squad some serious muscle. 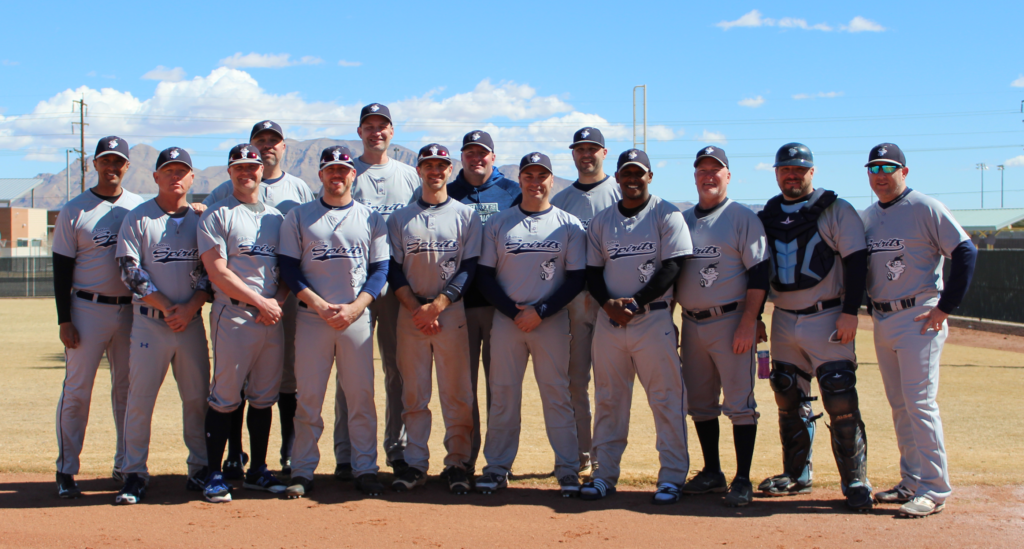 Last but not least, with most of its players seeing time this Spring in Las Vegas, the Masters (45+) squad returns with nearly the same core of veteran players moonlighting on the Veterans (35+) team. Mahalik will assist as a timely sub and the addition of veteran pitcher, Sean House will give the silver-haired bunch a nice boost at the pitching position. Kirk Sipila returns in his third season and the team manager, and the squad will reap the benefits of his Big Stick and Team MVP awards from 2017.

Outside of the X’s and O’s, the Dallas Spirits Baseball Club has officially become the Dallas Spirits Baseball Club, Inc. during the off season. The Spirits picked up an IRS recognized 501(c)(3) charitable status to assist with fundraising and philanthropy around the community. Ultimately, the team will seek charitable options in the community that fall in line with the team’s commitment to family and the club looks forward to working alongside the NTABL’s charitable actions with the Texas Scottish Rite Children’s Hospital. To learn more about the Spirits or if you’re interested in an opportunity to donate, please visit www.spiritsbaseball.com.

Finally, the club would like to thank both its new and continuing sponsors who make adult baseball possible and also assist us with our charitable goals. Special thanks to Waxahachie Autoplex, DMIS Managed IT Services, Christi Greene Homes, J. Macklin’s Grill, DG Threads, Renfield’s Corner, DJ Sean Lee, and Re/Max Realtor, Kathy Croft for their donations to the club!