(July 19, 2021 – Plano, TX) It was a familiar scene for Travis Hitzeman on Monday night as a pair of hefty swings, three really, was enough to single-handedly match the team’s opponent with 6 runs as Hitzeman hit for a pair of home runs and a double to lead the Spirits (45+) squad to a 9 to 6 win over the Reds. Hitzeman finished 3-for-3, with 3 runs scored and 6 runs batted in. Fortunately, the rest of the team added another 3 runs to the mix to assist with the victory. Eric McPherson also added a pair of hits including a double, while Shawn Lee, David Tipton, and Brant Finchum also made it to the box score with two hits o the night. 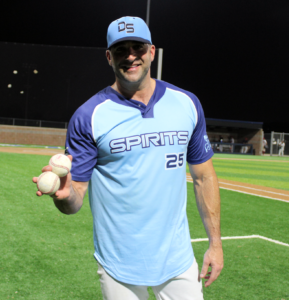 The Reds were able to strike quickly, picking up a run in the top half of the first after Brett Baker led the game off with a single. Baker swiped second base and then moved to third after Chris Allen singled. Allen went on to steal second and with runners in scoring position, Sammy Vives madee due with a sacrifice fly that scored Baker to give the Reds a 1 to 0 lead before Daniel Washington and Will Nash both flew out to end the top half of the inning.

The Spirits rallied and took the lead in the bottom half of the inning after Kirk Sipila drew a one-out walk and Hitzeman swung for one of his first exit-velocity headline making home run to make it 2 to 1 ghosts. Lee followed with a single and stole second after Brian Hackney flew out, but House grounded out to end the inning.

The Reds tied things in the second after Steven Nutt singled to start off the inning. Chris Duty followed with a single to advance Nutt and both runners advanced on a passed ball a few pitches later. Stacy Scott flew out and TK Hayes followed with an RBI single to score Nutt, but center fielder, David Tipton decided not to allow for a lead change as he relayed his throw to the dish where catcher, John Hefner was able to tag out Duty to record the second out of the inning. Holmquist was then able to get Todd Murrah to ground out with the game tied, 2 to 2.

The Spirits then rallied for a second lead in the bottom of the inning after Tipton led off with a single and swiped second. Hefner flew out and Tipton was able to tag and move to third on the play. Earl German flew out, but Brant Finchum came through with an RBI single to score Tipton and give the Spirits a 3 to 2 lead. McPherson drew a walk to keep the inning alive, but Baker was able to get Sipila to ground out to stop the scoring.

Holmquist and his defense were able to stave off any additional scoring in the third, despite Jeffrey Smith reaching on an error and Allen adding another single. Fast forward to the bottom half of the inning and two pitches in, WHACK! Hitzeman’s second homer of the game gave the Spirits a 4 to 2 lead. Lee grounded out, but Hackney walked and House singled to keep the bases warm. Tipton followed with an RBI single to score Hackney and a fielder’s choice allowed Hefner to reach safely, but squeezed House at third. German followed with a ground out to end the scoring, but the Spirits held a 5 to 2 advantage.

The Reds went in order in the fourth and the Spirits opened up for another 4 runs after Finchum, McPherson and Sipila singled to start the inning and load the bases. With his teammates salivating for another big ball, Hitzeman dug in for his third at-bat and although it wasn’t a home run during this trip. his base-clearing double deep to the left-center field gap made it 8 to 2, Spirits. Hitzeman moved to third on a passed ball and Lee took advantage of the scoring opportunity with an RBI single to give the ghosts a 9 to 2 lead. Hackney singled to move Lee to second, but Baker was able to get House and Tipton to fly out and Henfer to ground out to end the scoring.

The Reds rallied for another pair of runs in the fifth inning and added two more runs in the sixth, but it wasn’t enough as the league’s 2-hour time limit came into play and the Spirits walked a way with another win.

The team gets back to action next Monday night when face the league-leading Cardinals who have two wins over the Spirits thus far in the season. Click here or details.