(May 26, 2021 – Euless, TX) It was a quiet night for the Spirits (40+) offense, a phrase that hasn’t been used very often in 2021. The league-leading Spurs were back to avenge an earlier season forfeit and there was no doubt that the team was motivated to get the win.

The Spurs ousted the Spirits offense 6 to 0 behind their hard-throwing left handed pitcher, Mauricio Lara. The former Mexican Minor Leaguer responsible for over 1,100 strikeouts during his 19-year career added 10 more Ks to his dossier as he was able to hold the Spirits to 5 hits on the night in just 5 innings of work. Lara faced off against former MLB Minor League, Craig Molldrem. The Spurs were able to find hits and make plays offensively as they put up 4 earned on 6 hits against Molldrem as the Spirits offense and defense had no answer, committing 5 errors in the field that were actually tracked.

Molldrem finished with a pair of hits on the night and Kirk Sipila, Travis Hitzeman, David Tipton, and Duane Aponte all reached base safely one time with singles. The loss drops the Spirits record to 7-5 overall where they currently show in fourth place. Following events that took place later after this game was played, the Spirits moved to third place as the Spurs dropped out of league play due to unknown reasons.

The Spirits were scheduled to face the Drillers on June 2nd, however due to issues with the lights the game was cancelled. The next scheduled game for the 40+ squad occurs on June 9th when the Spirits host the Red Sox. Game time is 8:45PM on Legends Field at Texas Star. Click here for schedule details. 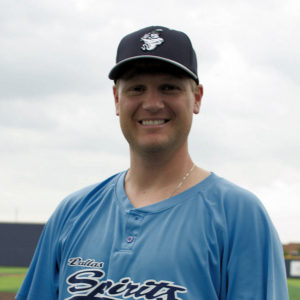