(October 17, 2017 – Plano, TX) The Spirits (Trinity) squad wasted no time letting the Braves know the second meeting between the two clubs wouldn’t be a close one. The poltergeists exploded for a 6-run first inning and never looked back as they cruised to an 18 to 5 victory Tuesday night at Graham Field.

Justin Anderson led things off with a single to start the Spirits fast inning, and Anderson advanced to second and then third after JP Seider and John Showalter also singled to load the bases. Both Anderson and Seider scored after Kyle Redinger made it four straight hits, and JR Rivera made it five straight with a single to right. Redinger was able to advance to second, however the Braves made a play on Showalter at third and were able to tag him out off of the base. Mike Anderson recorded the second out of the inning with a ground out that was good enough to score Redinger, and a triple by Mike Werner pushed in run number five as Rivera crossed the plate. The Spirits capped off their 6-run first inning start with an RBI single from Duane Aponte, and following a single by Teddy Turner, Aponte later scored on a wild pitch by Braves pitcher, Chris McHatton.

The Spirits made it 10 to 0 in the second with singles from Redinger, Rivera, Mike Anderson, Werner, and Aponte, and a pair of walks to Turner and Justin Anderson all contributed to the 4-run second inning and a game that appeared to be over after two innings of play.

The Braves rebounded however, with a pair of runs in third after Matthew Topps singled with one out and advacned to second when Jonathan Patterson drew a base-on-balls. Austin Bazar grounded out, but pushed both runners over and both runners scored on a fielding error by Redinger to cut the lead down, 10 to 2.

The score remained intact until the to half of the fourth inning when the Spirits unloaded for an additional 5 runs after Patterson replaced McHatton on the mound. The pitching change impact was moot after Mike Anderson drew a lead-off walk. Werner flew out and Anderson made his way to second on an error by the Braves infield. Aponte singled to put runners at the corners with one out and Turner loaded the bases after wearing a pitch from Patterson. Justin Anderson reached on a fielding error by Chad McCune and the error was good enough to allow Mike Anderson to score. Both Aponte and Turner then scored on a single by Seider and Justin Anderson made his way home following a wild pitch after previously stealing both second and third. Showalter picked up an RBI single to score Seider and the Spirits led, 15 to 2.

The Spirits picked up 3 additional runs in the fifth, which included an RBI sacrifice fly from Showalter and an RBI single by Rivera. Showalter then replaced Aponte to close out the shortened game (time limit) and gave up 3 runs to the Braves following a hit-batsman and three straight Braves singles to give the game its final score of 18 to 5.

“Not much to discuss about this one,” noted Showalter following the contest. “The first meeting was much closer than this, but tonight the guys seemed to put their foot on the offensive gas and never looked back. Credit our hitters for being ready to play and continuing to play against the game. Their pitchers struggled tonight, but I’m sure we’ll see improvement next time.”

The Spirits (Trinity) squad returns to action Sunday when the visit the Patriots Baseball Club at Jesuit College Preparatory in Dallas. First pitch is scheduled at 1:15PM and you can review schedule details or watch the game online by clicking here. 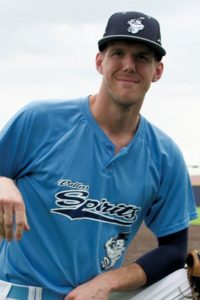